Ōka (桜花, Ouka) is one of the main characters in Toukiden and one of the mascot characters. She can fight beside the protagonist during hunts in the single player main story.

Players who participated in Famitsu's Toukiden questionnaire ranked her as their second favorite character.

Ōka is Kikka's older sister who was born in Unzen, the center of humanity's government in Nakatsu Kuni. Ever since her childhood, Ōka has admired Slayers and the legendary "Annointed Innovator" (ムスヒの君, musuhi no kimi). Desiring to protect her sister and the innocent from danger, she had first trained to become a Barrier Priestess. She cannot hear spirits as well as Kikka, however, so Ōka sought to perfect her sword skills to counteract her flaw and soon became a Slayer. In due time, her swordsmanship became second to none and she achieved her dream. She left her home when she was assigned to Utakata Village and became one of the village's central guardians.

As one of its veteran Slayers, she oversees and assists the protagonists' starting missions. Yamato orders her to instruct the Quiz Battle Toukiden protagonist's training, introducing him/her of the mandatory and extraneous trials for trainee Slayers. When he/she crawls through the basics, Ouka considers withholding her recommendations for his/her promotion. She changes her mind as he/she continues to defeat demons and proceeds with his/her training. As the protagonist rejoices with Lady Akatsuki, Ouka asks Ibuki to investigate the nature of his/her powers and seems worried by his report.

Throughout the main narrative of the main series, she is entrusted by Yamato to lead divisions of recruits or act as the lone diversion to support whatever mission he has set aside for the protagonist. Ōka is the most vocal character when Kikka's health or Shūsui's plans is in the focus, protesting anything which she believes may bring harm to her sibling.

Near the end of the main story, the threat of another "Awakening" portal is imminent. The Slayers hunt for souls with the hopes to gain enough power stop its emergence, yet their progress is obstructed by a giant demon emitting a powerful wave of miasma near the portal's entrance. After one of their expeditions, Ōka visits the protagonist's home for a private chat, expressing her concern for Kikka's withdrawn composure and failing health to them. Her apprehensions are cut short by the protagonist's Tenko offering them seeds from a divine tree for a snack. She eats it and cheers up, though she is taken off guard by its bitterness.

On the same night, the protagonist sees Kikka outside headquarters and bears the priestess's tears of anxiety. Ōka sees them and overhears her sister's genuine fears for the first time. The next morning she decides that she cannot bear the thought of sacrificing Kikka for her own survival. Protected from the miasma by the seed she consumed earlier, the swordswoman decides to slay the giant demon herself. Since she feels she is doomed regardless of whether she succeeds or fails, Ōka bids the protagonist to care for Kikka in her stead. Despite the protagonist's pleas to abandon her suicidal charge, she stays true to her convictions and leaves the village.

The protagonist intends to follow her alone, but the other Slayers are aware of his/her plans and offer their support. They band together to save Ōka even if it may mean that it is their final time leaving the village. She is dumbstruck when they arrive yet moved by their concern for her. Convinced by their chivalry and her sister's assurance, Ōka decides she has more to gain by living. With the giant demon vanquished during their exchange, the miasma is lifted and the Slayers finally gain passage to the dimensional portal. After they safely return to the village, Ōka thanks the protagonist for caring and shares her soul with him/her.

During Kiwami's action trial, Ōka is named representative commander in Yamato's absence. She trusts Hatsuho's enthusiasm to provide information to the new recruit and soon regrets her decision. Kikka largely plays second fiddle to the main plot, volunteering for the death charge to protect Utakata against the "Eclipse Demon" portal. When her soul is being consumed by Izuchikanata, she hallucinates that she is living at Sacred Mountain with her sister, seeking to save Kikka from the ministers mistreating her. Her soul returns to the living and she fight in the final battle.

After Izuchikanata's death, Mio and Miyu interview her regarding her fear of spiders. Ōka denies the rumor, trying to keep her skittish reactions to herself.

Sometime after these events, Ouka hunts an Amatsumitsutsuka. She and the demon are somehow sucked into a dimensional portal and arrive near Shinonome Village. The protagonist comes to her aid. After they slay the demon, Ouka reassess her surroundings. She is surprised to learn that a northern village besides Shiranui is still standing and is happy to reunite with Sekka. With no way back home, she agrees to help the Slayers purify the miasma surrounding the barrier stones around the village.

Ouka soon surmises that she may return to Utakata once more if they find the Amatsumitsutsuka again since this particular demon has been known to whisk its victims to faraway locations. In the meantime, she briefs the village residents on events in the main land. Although she reveals to them that northern regions have been abandoned by humanity, Ouka swears that she will spread the news of Shinonome's survival when she returns to her Utakata and encourages the residents to stay strong. After she reunites with Ibuki, she is often policing his attempts to flirt with the ladies of Shinonome.

Asano commented that it had been some time since she last voiced Ōka, so she had to go watch some videos to remind herself before her Warriors All-Stars recordings. She wanted to make sure to get her character right for fans. She shares Ōka's fear of spiders so it helped relate to her better.

Rigidly standing by her desires to protect the innocent, Ōka is a fierce and righteous warrior. She is an obedient soldier who courageously faces any danger head-on. While she upholds her dedication to duty with old fashioned traditionalism, she is amicable enough to share a laugh with her comrades when there is no danger. To fit the warrior image, Ōka speaks in a masculine tone and rarely uses feminine phrases in the Japanese script. She stubbornly refuses to admit that she has any fears or weaknesses to normal spiders.

Ōka dotes on her sister and treasures any time she can spend with her. She feels conflicted with relying on Kikka's self-sacrificing powers, even if it does give her sister a sense of pride and save others from demons. She tries to teach or introduce Kikka to topics from the outside world, but Ōka can be as scatterbrained as her sister when it comes to anything beyond the scope of her profession. As a protective older sister, she intimidates the men in the village to keep their distance from Kikka. Her Kiwami requests illustrates both sisters to be horrible cooks, although Ōka can eventually make good and edible food if the protagonist helps them.

In Warriors All-Stars, Tamaki reminds Ōka of Kikka so she acts like an older sister figure to her.

): Ōka does a short hop and slashes downwards. If the first hit connects with an enemy, then she will follow up with an upwards right slash, then upwards left slash.

: Ōka slashes upwards to the right to launch enemies up.

: She slashes to the left, and then dashes forward while doing a clockwise spin, and then slashes right.

: Ōka slashes forward which launches enemies up into the air. She then sheaths her sword, which unleashes a barrage of circular slashes on the airborne enemies.

: Ōka slashes up to the right, and then up to the left, creating an X-shaped slash.

: Ōka quickly slashes vertically downwards and up, which launches enemies into the air. She then sheathes her sword, which unleashes a barrage of circular sword strikes on the airborne enemies.
Dashing +

: Oka does a clockwise spin and slashes to the right.
Dashing +

: Oka does a clockwise spin and slashes to the right.
Jump +

: Ōka does a large overhead slash onto the ground.
Jump +

: Ōka swings her sword to the right in midair.

: Ōka infuses her sword with pink energy, and does a large overhead slash into the ground that hits so hard that rock rubble erupts out of the ground.

Once her affinity is at maximum level with the protagonist, she will give him/her the recipe to create a replica of her weapon. Her long sword is the only one in the game with 106 critical. Higher affinity additionally increases the chances of her appearing within the village's bathing area. 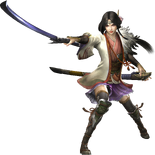 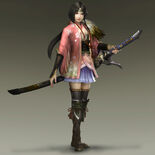 Arnice downloadable costume
Add a photo to this gallery

Retrieved from "https://koei.fandom.com/wiki/%C5%8Cka?oldid=444985"
Community content is available under CC-BY-SA unless otherwise noted.