Achilles (アキレウス, Ἀχιλλεύς) is a playable character in Warriors: Legends of Troy. Achilles is the mightiest warrior within the Greek army who has an infamous reputation of cutting down many Trojans in his path. His vicious method of slicing through the carnage in war strikes fear not only in his enemies but his allies as well.

Achilles is the first Greek to set foot on Troy's shores as he clears a landing position for the Greek ships. Together with Patroklos, he clears the area of threats. Soon after, Achilles and the Greek leader, King Agamemnon, antagonise each other. Despite having no love for the Greek commander, Achilles still fights as part of his army.

Achilles continues to push onward into Troy as the years pass, eventually conquering twelve nearby cities. As he and his men invade Lyrnessos, he meets resistance from an old man named Mynes. During the duel Achilles commands the elderly man to lower his sword, but Mynes would rather defy him than live as a slave. Briseis curses him for his callousness when Mynes is killed and accuses him for being a heartless murderer. Achilles pays no heed to her outburst and is intent on claiming the women his prize. As she is dragged away by Greek soldiers, she cries that Mynes was his father, to which Achilles appears regretful.

Years later, a deadly plague infects the Greek army. Agamemnon orders Achilles and Patroklos to beg for mercy at the temple of Apollo. His mother meets him as they travel to their destination and warns him to avoid Troilos, a Trojan prince loved by Apollo. Arrogantly defying the god's will, he slays Troilos and invites Apollo's wrath. The god inhibits a statue in his image to attack Achilles. Emerging victorious, the priest of the temple reveals that Apollo released the plague since Agamemnon took the priest's daughter for himself. When Achilles reports his findings, Agamemnon gives the girl back to her father but takes Briseis as compensation. No longer able to tolerate the king, Achilles lets Agamemnon do as he wishes but vows to never fight for him again. His withdrawal from the war causes the Greeks' downfall.

Once the Greeks have their backs pushed against Troy's shores, Agamemnon gives Briseis back to Achilles in a bid to force the warrior to fight. Achilles is resolved to stay true to his pledge, so Patroklos decides to wear his friend's armor and fight in his stead. Achilles warns his friend to avoid crossing the river of Skamandros and, though his appearance is enough to restore ally morale, his friend is killed by Hektor. As the Trojan prince steals his armor, Achilles swears vengeance for Patroklos. Thetis brings him a set of new divine armor which he proudly wears as he returns to the battlefield.

Reaching the river of Skamandros, Achilles angers the river god by killing Asteropias. Skamandros resurrects the dead in the river to kill Achilles. As the warrior escapes, the river god decides to let him free. Achilles finally reaches Hektor and, after winning their duel, refuses the prince's request for a respectful burial for the loser. Stating that he will forge his own fate, he kills Hektor and mutilates his corpse. Afterwards, he lays Patroklos's ashes in a golden urn and instructs others to lay his ashes within the same urn. He is confronted by Penthesilea soon after. Aware of her past, he expresses admiration and remorse when he lays her body to rest.

The Greek army march onward to Troy's walls and Memnon of the east is the last ally to help the isolated kingdom. Achilles quickly slays him and leads the Greeks inside Troy. He corners and kills Deiphobos before Paris' eyes. Their duel is interrupted when a Greek soldier reports they are losing ground. Moments before Achilles retreats from Troy's gates, Paris shoots an arrow to his right heel. As he staggers, he is then killed by a barrage of arrows fired by the prince. Ajax and Odysseus later fight the Trojans to retrieve his body for a proper burial.

Moments before the enemy's arrows pierce through his skin, he is mysteriously transported through time to the dimensional realm in Warriors Orochi 3. Wanting to find glory anywhere he goes, Achilles unceremoniously serves Da Ji and answers at her beck and call to fight against the coalition. Once Da Ji agrees to help humanity, Achilles bluntly follows suite. He later helps Xiaoqiao in saving her family at Changban, and aids Sun Ce and Nō in sending gunpowder from Honnōji to Jieting in order to save Mitsuhide from being burned alive.

Achilles appears in the downloadable scenario "Phantoms of Nanzhong" to assist Meng Huo against the assumed phantoms. He supports Xingcai's fight against her father in "Best of Both Worlds" and aids Lu Bu in "Lu Bu's Revenge" to defeat Nezha. Achilles also sides with the Demon Army in "Demons vs Mystics" and leads the team to raid the enemy's weapon depots in "Fortress Besieged". In Rescue at Honnoji, he blocks the Wei forces sent to rescue Cao Cao and Nobunaga.

In Ultimate, Achilles is given a side story scenario depicting his services to Da Ji alongside Motonari Mōri. Together, they defeat the pursuing coalition army at Kyūshū. He also appears as part of Musashi's independent army at Yan Province, where they are duped into attacking the Wei forces.

Warriors Orochi 4 Ultimate has Achilles warped back into the world amidst a battle between the Coalition and the Asgardian armies at Itsukushima-Chengdu. Captured by Zeus and the other gods within the Coalition, he agrees to join them for hope of better battles.

Growing increasingly bored, Achilles complains to be put into battle to Zeus, who complies by having Achilles face the gods of Olympus at Guangling. Although he is unhappy that they did not have a true battle, he is satiated for the time being. He later participates in the mock battle between the western gods and the mystics on the side of the gods. He is also amongst the warriors that Gaia calls upon for her final battle against the humans before returning them back to their worlds

"My teachers often spoke of it as a sign of greatness. Let me tell you: I am even greater than what they imagined."

"It is not I that will pollute the mighty Skamandros, but the fetid corpses of your men."

"It's not so bad being next to the strongest beast on the battlefield. I can hear numerous cries and see much blood being spilled."
"Hmph... Just what I'd expect to hear from a bloodthirsty lion."

: Hops a little to deliver a decapitating slash.

: Slashes with sword as he turns and follows with a damaging cut to their side.

: Stabs forward with sword. Follows with an overhead slice.

: Rams forward with shield covering front. Angles shield to become parallel with the ground to bash the shield's rim forward.

: Advances a step forward while shoving shield into foes.

: Lunges forward a little longer to smash shield into enemies.

: Spinning kick. Achilles emits a stunning shockwave during the animation, which lowers the guard of foes in its range.

: Jumps to thrash shield against foes. As the shield drops, a stunning shockwave erupts to hit nearby foes.

: Throws your own weapon.

Finishers can be performed by weakening a foe's guard or health. When the button for a Focused Attack flashes on a target, approach them from a different angle to see another Finisher.

: Gives a leaping kick to the left, stunning enemies.

: Steps forward fiercely and swings his sword hard to the right.

: Grabs an opponent and slams him/her behind him then impales the target.

): Performs a kick that creates a shockwave then uses his sword to slash into the enemy's ranks, which creates another shockwave.

: Slashes and rushes into enemy ranks.

: A smash that cracks the earth.

R1: Charges shield towards opponents then kicks them away.

, R1 (Warriors Orochi 3 Ultimate only): Inflicts two diagonal slashes while in mid-air. The last hit causes affected enemies to be thrown on the ground hard.

: Achilles lets out a powerful roar, then pierces his sword upwards, then swings his shield left, also setting enemies on fire.

: Swipes on both sides

: Slices the enemy on one side.

Achilles is the balanced character for the Greeks. His attacks have good range and are easy to use for duels or crowds. He is naturally resilient to enemy attacks so he can endure several attacks before breaking down. While he may not be the fastest or strongest character, his overall efficiency acts as his shining grace.

Achilles uses the following big star weapons in the game.

In Greek mythology, Achilles is the son of the sea nymph Thetis and Peleus, king of Phthia. At some point in his childhood, his mother attempts to make him invulnerable by dipping him into the River Styx. In another tale, she anoints him in ambrosia and leaves him on a fire in order to burn away the mortal parts of his body; whatever the case, the ritual was left incomplete.

Achilles is most famous in mythology for his part in the Trojan War. During the war, he scores many victories (including killing the eldest prince of Troy, Hektor) but is ultimately killed by Paris after Paris fires an arrow into his heel. 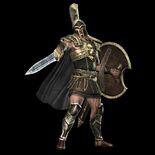 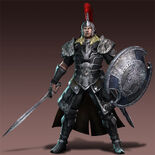