Andragoras III (アンドラゴラス三世) is a secondary character in The Heroic Legend of Arslan and a non-playable character in Arslan: The Warriors of Legend.

He is the eighteenth king of the Pars kingdom who is renowned as an invincible commander. His shining feat before his enthronement was conquering the Badakhshan region and absorbing it within Pars. To the public, Andragoras was crowned when the previous king (his older brother) succumbed to his dire illness. In reality, Andragoras assassinated Osroes to claim Badakhshan's Tahamenay for himself. Inept with politics and governing, his reign centered on conquering neighboring kingdoms through military might.

Andragoras leads the troops against the Lusitanian invasion at Atropatene Plains; he is utterly defeated by Kharlan's betrayal and the Zahhāk Gurus' magics. He is held captive by Hilmes in Pars's goals, and his whereabouts are unknown to many of his followers due to the confusion of their panicked retreat. One of the objectives of Arslan's coalition is validating his survival and rescuing him.

In Free mode, "Clash with the Parsian Army" has Andragoras lead a Parsian onslaught against Sindhura only to be driven out by Jaswant. His capture is seen in the DLC Scenario "Pursuit of Andragoras" despite Vahriz's efforts to protect his king.

Andragoras is deaf to human empathy and generosity. Anyone who stands in his way is as good as dead to him. Even people who treat him well are not immune to his wrath. He is a greedy, stubborn and small-minded thug who only thinks of himself. Priding his indisputable might and intimidation in warfare, he revels any chance he can take by force. Yet Andragoras is severely outclassed by anything outside of his scope. Crippling him with logic and practicality causes him to erupt into a blind rage. 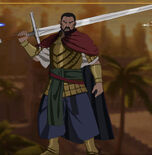 No Helmet
Add a photo to this gallery

Retrieved from "https://koei.fandom.com/wiki/Andragoras_III?oldid=308460"
Community content is available under CC-BY-SA unless otherwise noted.