Angelique étoile (アンジェリーク エトワール, étoile meaning "star" in French) is considered the fourth main installment of the Angelique series. Its PlayStation 2 port is one of the projects made for Neoromance's tenth anniversary. It is the first game in the series to not provide Angelique as the default name for the protagonist.

Yuki Hori and Mami Matsushita are the producers; Kazuyuki Nakasa is the director. Midori Kusanada is the scenario director. Nobumasa Takagi composed the music.

The Premium Box edition includes a collector's plate. The PS2 Premium Box has a character message CD, a scarf and a set of greeting cards. Consumers who purchased the Windows version early using Gamecity Shopping received an illustrated box sleeve with their purchase.

The protagonist is a normal high school girl who was born in the Sacred Bird Cosmos. She and many other girls act as school representatives for a field trip to Holy Land the day after her seventeenth birthday. Like the other girls, she is asked by the Sacred Guardians to walk through a series of doorways. Her path ends at a mystical stone slab which shimmers in her presence. Moments afterwards, a spirit takes the form of her treasured childhood doll to inform her that she is the legendary étoile, or a celestial messenger for the cosmos. Her mission is to help nurture the Sacred Beast Cosmos's growth within a year (365 days).

The player can name their protagonist and assign her birthday and bloodtype at the start of each game. Choose whichever doors and text options from the introduction sequence to slightly alter starting Intimacy ratings with the romanceable characters. The protagonist can move freely between the Sacred Bird Cosmos, Arcadia (Celestia) and the Sacred Beast Cosmos.

Main story events advance only when the player focuses on the cosmos. The general gameflow for completing the main storyline is a repeated cycle of steps:

If the player wishes to see the good default ending and/or romance every character, they will need to repeat the recruiting cycle nine times. Traveling between planets in the Sacred Beast Cosmos requires the protagonist to board the Flying Ship, Aurora; the captain will inform players of the time needed for a one-time trip to their highlighted destination before departure. The time needed for fostering the cosmos may negate romance events if the player plans poorly.

Legendary Energy (★ in upper right hand corner) is needed to collect Sacrea from the guardians. The protagonist can ask for "a little" (少し, 1 ★) or "a lot" (たくさん, 2 ★) once per visit. His power is allocated within her bracelet and can be stored until it reaches maximum capacity (either four "a little" or two "a lot" offerings). Cultivation will not begin/progress unless the protagonist unleashes the Sacrea at the proper location. At first, the player can achieve this by visiting Rachel in the Sacred Beast Cosmos's throne room. Once planets in this cosmos are born, the protagonist will need to use the ship to deliver the Sacrea directly. The player can earn a maximum 12 ★ by recruiting the Sacred Beast Cosmos's Sacred Guardians. There are no obstacles or rivals for stopping cultivation for the majority of the game.

Sacrea Spirits can be challenged as they appear on the star charts. See Rachel during a weekday and select the "Trial" (試練, 4 ★) option to initiate. Trials cancel any other plans for her day and automatically drains days of the week once they begin. For each of these confrontations the protagonist brings the affiliated Sacred Guardian for the Sacrea Spirit. Players can choose to leave the spirit to the guardian or have the protagonist negotiate with it to stand down. If he has high Intimacy ratings with her they can perform a special finishing blow called "Romantic Wave". A compatible pair who performs the technique will alter the planet's starting culture level.

Sacred Beast guardian candidates generally require the same cost and often time as Trials in order to be convinced. Depending on the man's location the player will need to visit Rachel or Rosalia in order to see them. Certain text options will be better than others, each affecting the protagonist's Intimacy rating for the male character. Gold and gifts may be needed for their recruitment. Negotiations can be done solely by the protagonist or with a Sacred Bird guardian's assistance. A special illustration and higher Intimacy and Affinity ratings are rewarded to players who successfully complete the process without another character's help.

Legendary energy can be restored by retiring to the protagonist's room. She can check her inventory, the latest data with other characters or the cosmos and/or review the game's in-game encyclopedia through Tantan's notes. A day passes when she chooses to sleep, and her energy is restored with the new day. Save before sleeping to prepare for surprise date invitations or automated story events which may take start the next morning. If the player encounters a result that doesn't agree with them, they can choose to load from one of their thirty possible save slots. The pictured character for each slot indicates who has the highest Intimacy rating with the protagonist at the time of its save.

Every Saturday the protagonist is expected to give a progress report to Rachel. She will pay the protagonist a default 1,000 Gold salary and give bonus Gold if cultivation efforts were made or if Sacred Guardians were anointed within the same week. If a particular Sacrea is more dominant in the cosmos, the Queen and Queen Aides will hold a tea party to reward the protagonist after she is paid. Rachel's payments are the only reliable method of receiving Gold, which is necessary for shopping at Celestia or another planet's shop. Shopping does not deplete energy, meaning the player can buy/sell items at their leisure. No two stores are entirely alike.

Although the above paragraphs give an overview for the game's main story objectives, the player is free to ignore or fulfill them as they please. There are three different endings for the default story.

Nineteen characters can be romanced: the Sacred Guardians for both cosmoses and Arios. Arios is available in subsequent playthroughs. The player must have at least 2 ★ unused, one Sacred Beast guardian and must visit Rachel on Fridays in order to see him. Visit him three times and select the correct text options to unlock the chance to romance him like other characters.

Intimacy and Affinity are the only two attributes for affecting a character's affections for the protagonist. Lovelove Flash, the "Charm" (おまじない, 2 ★) option at Sacred Beast's House of Divination, continues to be the only way of changing Affinity. étoile increases the number of opportunities for boosting Intimacy between a male character and the protagonist.

Mail responses only arrive when the protagonist sleeps in her room at the Sacred Beast Cosmos. Intimacy can drop to zero if the protagonist ignores a guardian for too long and/or they purposely state displeasing answers.

Celestia dates are the best method for greatly changing Intimacy. Dates take the whole day (Morning, Day, Evening, Night, Midnight), and at each phase the player can choose to explore an entertainment area. Within these areas, the couple can visit a place listed within the area's drop down menu. Places can be permanent, seasonal, monthly or available by the time of day. Going to a male character's favorite location greatly increases their Intimacy; visiting a place they don't like lowers it. Each character has a special date gift and/or recipe prepared for the protagonist if their favorite spot is explored with high Intimacy.

When the player has triggered a response affecting Intimacy, this is reflected visually through the Heart Gauge located above the text box. It fills or drops based on whether the character's reaction is favorable or not. Dates ordinarily end after visiting two locations. However, if the Heart Gauge is filled to highlight the heart icon attached to its right end, the date is extended. The two characters can share dinner together at a place of the player's choosing. A protagonist's order may also affect her date's reaction. Before the couple's meal the player can choose to give a present here or spend the time waiting with a conversation.

Filling the Heart Gauge twice in a single date unlocks a male character's personal romance event at Midnight. The three romance events must be seen in order to unlock a character's two different Confession endings. The other two options do not require these visits for activation, but they may assist with meeting the requirements. Multiple endings can be earned in a single playthrough.

Load from a previous save. Twenty-eight save slots are available. The pictured character is the one with the highest Intimacy rating in the save. The protagonist means no one particularly favors her.

Self-explanatory. If the player has cleared one ending, they can skip to a faster version of the introduction sequence.

Adjustments for text and skipping speed for character dialogue. Volume adjustments for music, sound effects, and voices are included. If these options are changed before a new game, they will automatically be in effect.

This game was one of the playable titles available at Koei's Tokyo Game Show 2004 booth.

Satelight animated a two-cour 25 episode TV animated adaptation called Koisuru Tenshi Angelique. The first season's subtitle is ~Kokoro no Mezameru Toki~; ~Kagayaki no Ashita~ is the second season's subtitle. The TV series's narrative roughly covers the game's main plot yet takes several liberties with character relationships and events. Every character received a redesign for the anime. Infinite Love and Dearest You were the opening and endings songs. ~Kagayaki no Ashita~ had Doukoku no Ame and Yakusoku no Chi he.

A web radio program, Koisuru Tenshi Angelique ~Sweet ♥ Paradise~, was broadcast simultaneously. Kenyu Horiuchi (Oscar) and Daisuke Namikawa (Heyue) acted as the MCs. The compilation CDs for the program make a fraction of the anime only merchandise.

Several CDs and databooks were created. Free samples of the four panel comics anthologies published by Koei can be read online at Gamecity. Longer comic stories were published in the Angelique Blanche series. The comic short stories published in Neoromance Tsushin Cure! were compiled into a single book called Angelique ~Densetsu no étoile~. These stories were made with Saira Katsuki's writing and Shinko Katsurasaki's illustrations. Another Angelique fortune book was published with these characters.

étoile has been used to represent the Angelique series in Neoromance stage events and merchandise since its conception. Characters from this IP crossover into other character image songs in a CD called Neoromance Friends. Three étoile character image songs were included in the first Neoromance Christmas CD, ~Seiya ni Love Song wo~. Neoromance ♥ Festa Alamode 4 had Horiuchi (Oscar) record an exclusive character monologue and image song for its event CD, Neo Romance Ondo.

The my GAMECITY social game based its Angelique universe on this entry. The Neoromance Jewelry series is based on the trois and étoile incarnations of the cast. Members of Koei's Fanclub can often purchase desserts and holiday character messages dedicated to these characters. Here is a list of recent campaigns which used Angelique étoile: 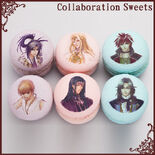