Angelique (アンジェリーク) is a romantic simulation video game series made by Ruby Party for the female audience. It is the first entry in the Neoromance series and generally seen as the start of the otome game genre. The namesake of the series is the default name for the main protagonist. "Angelique" is a derivative of the word angel, often being transliterated within the games as "angel like" or "like an angel". The series and the protagonist's nickname is Ange (アンジェ).

Angelique aims to be a fantasy story using European names and motifs. The tone of the series is purposely made to be "sweet and gentle", even during an impending crisis. Dialogue is written to be relatively simple for newcomers and takes inspiration from the shoujo manga market. The protagonist herself changes in each installment, giving players a different experience than the previous entry.

Each protagonist has the choice to say simple lines when given the chance to respond to an inquiry. Ruby Party developer Ayako Tsukaguchi has commented that these responses are done to preserve the protagonist's "cuteness". Though other characters will use audio clips to talk, the protagonist will not have a voice of her own in the games. Characters will also avoid speaking her name or calling her "Angelique", since her name can be changed by the player.

The Angelique games are mainly simulation driven, but the board game and role-playing genre have been introduced into the series. When Neoromance fans answered Ruby Party's surveys with a demand for adventure-like games, the Harukanaru Toki no Naka de and Neo Angelique games were made. Character designs for all of the games are done by Kairi Yura. She illustrated character artwork and game covers for the five major installments in the series.

Most Angelique entries takes place in a faraway cosmos ruled by a Queen. The Queen prays for the health and well being of its inhabitants, the power of her wishes maintaining the cosmos's stability. She resides on a living plane known as the Holy Land. Time flows at a slower pace on the Holy Land. One year spent there may be thousands of years elsewhere in the cosmos. Each Queen makes the choice of leaving their homeland and loved ones in order to protect the cosmos. Since she dedicates most of her time praying within a pocket dimension, a Divine Aide acts as her morale support and states the Queen's will to those residing within the Holy Land.

The Queen's cosmos is empowered by nine magical components which manifests into an energy called Sacrea. Each Sacrea is entrusted with a particular element and emotion to sustain the cosmos. Sacrea may manifest as a mystical spirit and may need to be tamed before they agree to help the Queen. Eventually, each Sacrea spirit will choose to entrust their powers to a man living within the cosmos. The chosen man is dubbed a Sacred Guardian and is brought to the Holy Land to govern their respective Sacrea power. Aside from maintaining the cosmos's prosperity, guardians are also given the duty of protecting the Queen from invaders. A man stays a guardian until their control over their Sacrea runs dry. They are then replaced by another chosen guardian.

Players are first introduced to the Sacred Bird Cosmos, but a second sister universe called the Sacred Beast Cosmos is created as the series progresses. In each game, the player's character is a young girl who interacts with either Queen and her Sacred Guardians. They may be in danger of being invaded by malevolent entities and will need the protagonist's help to restore peace.

In the spirit of Koei's historical simulation titles, the Angelique games are mainly designed to adjust given parameters found with the characters. These features are simplified for a system that is understandable and enjoyable for non-simulation fans. The game's measurement of time is contemporary; the protagonist divides their activities on a daily basis during the week and takes a break in their duties for the weekend. Each day the player has a given amount of energy for their tasks and replenish it by going to sleep. The tasks the player can perform vary with each game.

Characters have an "Intimacy" and "Affinity" setting, which can be altered based on the protagonist's astrological sign and blood type the player has chosen at the start of each game. A character's congenial rating with the protagonist can affect their dialogue and may increase the benefits of a character's service. The maximum capacity for Intimacy is 200, while Affinity maxes out at 100.

The Intimacy parameter is the fluctuating component based on the player's actions. It determines how much a character will give and may result in random visits from the character for a private outing. Players can raise this stat by talking to a particular character, spending time with them on a weekend date, or simply by visiting them. Intimacy rises quicker if the player responds with choices the character views as favorable. Negative responses may lower their rating with the protagonist. Later entries in the series includes the ability to give presents to male characters during weekends. A few titles also include the option to make promises with a male character.

Affinity maintains the Intimacy stat; if it's low, Intimacy rating will drop quicker or won't rise as quickly. Male characters will often need a maximum Intimacy and Affinity rating in order for the player to see their love confession. In most games, this is given to players as a voiced animated movie. Still images dedicated to a male character and the protagonist may occur if certain conditions are met with the Intimacy and Affinity ratings. Alternatively, these illustrations and movies may appear to dictate story events or other characters.

Players always have the option of either raising these stats with male characters for a romantic ending or avoiding them altogether to finish a normal game. These conditions need to be fulfilled or ignored within a given number of days. However, a "bad ending" is also available if players fail to meet the main story's objective and aren't liked by any of the game's characters. Multiple characters can reach high ratings, but the player inevitably runs the risk of having to refuse another person's company and causing a drop in their Intimacy stat.

Angelique has several live events, publications, and drama CDs for the franchise. A fan book serialization called Angelique Love Love Tsushin was made for the series.

my GAMECITY players used to have the option to make their avatar look like the first Angelique protagonist of the franchise (female avatar) or Oscar (male avatar). They could create a mansion that resembles a Sacred Guardian's manor and explore an Angelique themed cosmos. Players fought against Leviath and the resurrected versions of his knights as enemies.

To commemorate twenty years of Neoromance, a fourteen CD song collection shall be up for purchase July 22, 2015. It contains 152 vocal songs on thirteen CDs and a set of new songs on the last bonus CD. Interested buyers can view the promotional video for the CD set on YouTube. 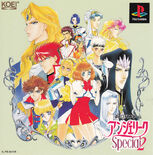