Areus's father was Emperor Balor's eldest son, Lugh Langaster Dyneskal. Lugh's elven lover was named Letecia. When Balor learned of the unholy union and the prophecy of his descendants killing him, he immediately ordered the deaths of his children and grandchildren. After the death of his daughter, Balor set his sights on Lugh and his family. Lugh defied his father's will and attempted to revolt with his loyal soldiers to protect his young son. Lugh's revolution started strong but proved powerless in the face of Balor's arcane powers.

Lugh hurried to save the elves and his family the moment their resistance crumpled to ruin. During this time he urges Letecia, their servant Elliot, and Areus to flee for safety. While they escaped by horseback, Areus witnessed his father being killed by Balor. Areus's family fled far east from their home, eventually finding a forest hut near Liberdam. Due to the taboo nature of his birth, humans nor elves accept Areus as their equal. He mainly found solace near his home, even regarding Elliot as his older brother rather than a family servant.

Areus never forgot his father's death, however, and swore vengeance. He has trained since childhood with his sword mentor, Darqin, and taps into his elven blood to harness magic. Nineteen years after his father's death, Areus decides to put his plan of revenge into action. First he desires to build his reputation by being a gladiator at Liberdam and to make ends-meet. Once he obtains enough fame, Areus eventually decides to enlist as a recruit within the Dyneskal military. By joining the enemy ranks, he would then capitalize an opportunity to get close to Balor. His two traveling companions, Dagda and Selene, force themselves to come with the youth.

Dorado, a student of Darqin's who fought beside Areus since his days as a gladiator, follows a similar career path as Areus except he obtains a higher rank upon enlisting. He acts as Areus's friendly superior in the Dyneskal military, ordering him to perform various tasks in Dyneskal's glory. His efforts even gains Balor's favoritism and trust. Since Areus kept his motivation of revenge a secret from Dorado, they understandably drift farther apart when Dorado personally oversees the deaths of Elliot and Letecia.

Shortly thereafter, Areus is given a mission to terminate Nemea and his rebel forces. Upon learning that Nemea is seeking to kill Balor, Areus offers his allegiance to Nemea. Reig accepts him immediately and gradually gains Nemea's trust. The rebel group at first tries to disable Balor's magical prowess and protection by destroying a magical artifact. They are foiled by Balor's sorceress, Iz, who uses it to grant her lord immortality. After they obtain an enchanted sword which can wound Balor by slaying a dragon, the harsh price for the sword dictates that the user shall completely disappear from the mortal realm with no one to remember them. Areus decides to wield it without hesitation.

With their preparations complete Areus feigns loyalty to Balor a final time by "capturing" Nemea and his party. Areus defects the moment Balor lowers his guard to reward him with a medal of honor. After a grueling chase for Balor throughout Ancient, Areus and company corner the corrupt king. Balor's immortal form pushes them back to regroup. During the brief respite, Areus entrusts the fate of the land to Nemea. With Dagda and Selene's help, he defeats Balor and strikes the fatal blow with the enchanted sword. Erasing himself from existence with Balor's death, Areus is faintly remembered as a legendary nameless hero. The only one who still has memories of him five years later is Nemea.

Sardonic and distrustful, Areus breathes jaded halfheartedness. He accepts the hatred directed towards him yet loathes the constant attention generated by his "half-breed" origins or past. Though aloof he is not heartless, as his loved ones will be quick to attest. Areus is not as petty to bully the weak and has an almost absentminded tendency to help the innocent. He cares for his family and tries his best to keep their fugitive lives a secret. His mother regards him as a spitting image of Lugh and is proud of his bravery. Though only a child at the time of his father's death, Areus especially held his father in high regard.

Areus is at first distant with his friends and comrades, often repaying their concern for him by shunning them. He spoke his thoughts only when he deemed it fit, primarily due to his intention to keep his quest for revenge a private matter. When his family dies and his motivations are made clear, he gradually opens his heart to them and trusts their sincerity. Seeing himself in Nemea, Areus considers him an equal who shares his pain of losing a loved one to Balor. By learning of Nemea's integrity and mission he finally begins to consider a life beyond vengeance and one of peace. In the end, it is their shared hopes of ending tyranny rather than his hatred for Balor which ultimately encourages Areus to sacrifice his own life.

Areus's basic attacks relies on him being close to his opponents. He is the only party member who can cast sorcery, meaning that the player may want to use him if they wish to magically exploit their surroundings to their advantage. As he learns more skills, the player can either use his basic yet simple sword attacks to get by or try to play distance games with his various advanced spells. He is not as strong as Dagda nor is he as fast as Selene, but he is the character who offers balanced stats and attacks. 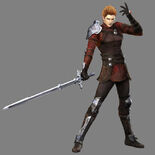 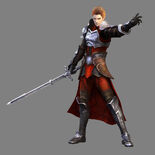 Ashen Thorn
Add a photo to this gallery
Retrieved from "https://koei.fandom.com/wiki/Areus?oldid=358593"
Community content is available under CC-BY-SA unless otherwise noted.