Arnice (アーナス) is the main protagonist of Nights of Azure. Half-demon, half-human, Arnice is a knight who can weaponize every part of her body. She is the assigned guardian to the sacrificial maiden Lilysse. Since Lilysse is the first to befriend her, Arnice protects her and simultaneously struggles to find a way to save Lilysse from her fate.

Shin Sangoku Musou Blast features Arnice in one of the game's collaboration events. Transported to the Battle of Hulao Gate by unknown means, she teams up with the player to find Lilysse while warding off Dong Zhuo.

M.A.O. remarked that it was difficult for her to act as Arnice in Warriors All-Stars because of her interactions with so many different characters. She felt the most comfortable when her character conversations focused on topics native to her continuity like Lilysse or Chris.

: Arnice slashes her sword down right, to the left, down right again, then she spins and slashes down left. She then dashes forward with a thrust, then does a small leap to slash downwards.

: Arnice summons Alraune to repeatedly shoot five energy balls that spread out in an arc. It will do this 5 times before disappearing.

: Arnice summons two toy sentinels to slash enemies upwards to the air. She then leaps up and slashes two times at the enemy.

: Arnice summons armies of toy sentinels to appear in front of her and scramble about for 3 seconds. She then slashes to the left.

: Arnice summons a wood golem to spin and launch Arnice to the air. She then slashes down to the ground.

: Arnice plants her sword into the ground and summons four toy sentinels to throw the enemies in the air and take turns leaping into the air to slash them. She then leaps up and slashes upwards.

: Arnice swings her sword up right and up left rapidly.
Dashing +

: Arnice swings her sword up right and up left rapidly.
Jump +

: Arnice slashes to the left.

: Arnice transforms into her demon form. She slashes with her arm to the right and then swings her arm to summon eight columns of fire to erupt out of the ground. She then charges a large fireball above her head and throws it down to the ground for a large explosion. 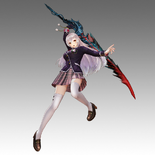