Bandit Kings of Ancient China (水滸伝・天命の誓い, Suikoden: Tenmei no Chikai, translated as "Water Margin Oath of Destiny") is a turn-based strategy game based on the classic novel Water Margin.

Kou Shibusawa is the producer. His goal for this game was to recreate a "life of free-flowing adventure" to distinguish itself from other KOEI historical simulations. Noriyoshi Ourai illustrated the game's cover. Music was composed by Shinji Kinoshita, Kazumasa Mitsui, and Yoichi Takizawa.

The objective of the game is to overthrow Gao Qiu before January 1127. To accomplish this, the player must select a hero to build a sizable army and become popular enough to gain the emperor's support. Popularity is earned by obtaining new prefectures, managing them efficiently, and aiding their inhabitants through charitable deeds.

The player can lose by failing the deadline, having their selected hero die, captured, or labeled a convict, or allowing another hero to overthrow Gao Qiu.

The player is expected to select a prefecture to inhabit and rule. Once they have settled, their goal is to provide sufficient food, gold, and loyalty to their followers. Territories and followers who are neglected have a higher chance of triggering civilian riots or desertion at the start of a month. Turns proceed by the month.

Prefectures fund armies. Their actions for altering parameters are limited by their commander's available body points each month. Five body points are regained each month. Experience points for raising one or more of stats can be earned from successful commands. Commands can only be issued by the player's chosen hero and their sworn siblings. Exiled characters are unable to perform a majority of them until they settle down and form a faction.

Throughout the year, events may help or hinder the player's progress. The game divides them into three categories: annual, seasonal, and monthly.

Annual events occur every January. They typically include tributes from functioning prefectures, increased tension between followers, and resource depreciation. The emperor may also request for a hero who can stop Gao Qiu. If the player's hero is chosen, they will receive a decree that authorizes them to fight the minister directly. This authority can be lost if the player's hero is forced into exile.

Seasonal events happen every three months. Their effects range from changes in climate to territorial decline. Summers have typhoons, and winters have snowstorms to inhibit progress in the effected provinces. Epidemics may come and go in any season to decrease troop count and health. Spring and fall festivals raise support and loyalty values while decreasing rate.

Monthly events are randomized. They include market rate changes and personnel expenses.

There are about 49 different prefectures in the game, though Gao Qiu's domain can only be accessed if the player receives an imperial decree from the emperor. Prefectures highlighted in red have smithies, those in blue contain shipyards, and the ones in green come with both.

* results highlighted in red only apply if the command fails.

Battles are conducted on a hexagon-shaped grid with two opposing armies. The player can participate in skirmishes so long as their Good Fellow —or sworn siblings— are directly involved. Otherwise, they will be done automatically by Chieftains. Up to ten units may participate at a time.

Units consist of one hero leading a large group of men by their side. A unit's effectiveness is measured by the leader's stats and the number of troops (life points), arms (defense) and provisions (loyalty and longevity in battle). Body points also affects their performance. Units with less than ten body points will suffer from fatigue and skip their turn to rest. Those with no points cannot resist capture, making them a liability for their respective side.

Ships play an ancillary role in battles for moving on watery terrain. They can be bought at a shipyard or built by a character with the right qualifications. They will be sunk if hit by melee attacks or fireballs; steersmen may escape to safety while others have a much higher chance of being captured.

Both sides are given a single turn per day, each day decreasing their food supply. Victory is achieved by defeating the ruler or all enemy commanders until provisions run out. Invading armies must accomplish this goal or occupy every castle within 30 days to win. Defenders may choose to outlast their enemies instead. Weather conditions change throughout the seasons. Weather and terrain can hinder both armies.

After capturing an enemy officer, the player may recruit them, imprison them, exile them to another prefecture, or execute them. Fallen heroes are less likely to be recruited, so imprisoning them can be wise in case they change their mind.

Below is a list of commands any unit can issue. Similar to main commands, they consume body points and yield experience if carried out successfully.

* results highlighted in red only apply if the command fails.

Four different scenarios are available from the start. Each one has a list of heroes the player can choose from.

Upon choosing a character, four of their stats (body, strength, dexterity, and wisdom) will be numerically randomized, though the player may adjust them as many times as they wish. Once ability levels have been decided, the game's difficulty setting will pop up; 1 is the easiest level and 5 is the hardest. Up to 7 players may be chosen. During a multiplayer game, any player who quits will have their side controlled by the computer.

One guidebook for the game was published by KOEI on October 1, 1996. A soundtrack CD includes game music and an original image song. This vocal song was reprinted onto Koei Soundware Vocal Collections Vol. 1 and THE BEST OF KOEI Vol. 1.

A comic adaptation illustrated by Haruka Takahane was published on March 1, 1991.

Koei published an original novelization called Suikoden Fukuryu-tachi no Gaika which focuses on the Good Fellows of Mount Liang. 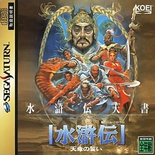 Map screenshot
Add a photo to this gallery

Retrieved from "https://koei.fandom.com/wiki/Bandit_Kings_of_Ancient_China?oldid=369035"
Community content is available under CC-BY-SA unless otherwise noted.