Not to be confused with Saint Yu Ji from Romance of the Three Kingdoms.

Beauty Yu (虞美人, pinyin: Yú Měirén, onyomi: Gu Bijin) is a woman of unknown origins who is best known as Xiang Yu's treasured lover. She followed him wherever he went, even near the end of his struggles with the rising Han Dynasty.

Beauty Yu co-stars in the Supremacy King chapter. When her lover was resurrected into the mortal realm by Shi Huangdi, she was brought to life as well. Although she had previously ended her life to avoid being a hindrance to him, she swears to always remain by her lover's side in their second chance at life. Yearning for the ties they once had in the past, she begs Shi Huangdi to endow her with his supernatural powers and arms herself to fight on the battlefield.

As Xiang Yu falls against the united Three Kingdoms, she attempts to guard her beloved even when the odds turn against them. In the end, they both fall to the Coalition's combined strength. While Xiang Yu thinks he has failed her, she is happy to be in his arms once more. The two lovers peacefully return to the afterlife together.

Yuji appears as a bonus character throughout the Romance of the Three Kingdoms series. Since she doesn't have high stats for war, she might best serve the player with domestic affairs. In the currently discontinued MMORPG, players could defeat a dungeon and witness Xiang Yu pledging his love to her from afar.

Rise of The Phoenix[]

She is briefly mentioned in the English version as "Empress Yu" and is held hostage at one point by Liu Bang (she is known as "Consort Yu" in the Japanese script). Xiang Yu accepts a treaty to split the land with Liu Bang in two in exchange for her safety. She also stars in an event when Xiang Yu first laid eyes on her. Enchanted by her beauty, he immediately declares his love for her and orders his men to prepare a carriage for her.

Beauty Yu rarely displays her emotions and acts passively to others, granting her a mysterious and noble sense of beauty. She openly expresses herself to her precious lover, reserving her gentle smiles for him. Devoted to her lover, she doesn't hesitate to sacrifice everything for him.

"There is no need for you to fight. So please withdraw."
"Those eyes... You too have someone to fight for, do you not? Then you must know the reason why I cannot run away..."

In Shin Sangoku Musou Multi Raid 2, Beauty Yu's normal attacks consist of discharging energy discs straight at her opponent. Though her attack string is mostly ideal for one-on-one duels, it also allows her to fight from a sweeping distance. Her strong attacks involve blasting enemies with strong gusts of wind whereas her main charge attack has her spinning around to summon a violent meteor shower. Also, she offers the following traits as an ally:

Beauty Yu uses large flywheels as her main weapon in the game.

Consort Yu was Xiang Yu's only known lover. While popularized in fiction and modern folklore, her actual name and origins are unclear. The Book of Han states that Xiang Yu was never willing to leave her side as he brought her with him in his campaigns. Her main mention in historical records is limited to Xiang Yu's famous Song of Gaixia, alternatively called the Song of Simian Chu, which was reportedly composed after his staggering defeat at the Battle of Gaixia. His poem is as follows (translation taken from Wikipedia):

力拔山兮氣蓋世。
My strength plucked up the hills,
My might shadowed the world;

時不利兮騅不逝。
But the times were against me,
And Dapple (war horse named Zhui) runs no more;

騅不逝兮可奈何！
When Dapple runs no more,
What then can I do?

虞兮虞兮奈若何！
Ah, Yu, my Yu,
What will your fate be?

After repeating his lines to his lover and men, they were moved to tears. She has no further appearances in the Book of Han or Records of the Grand Historian, but many novels, poetic compositions, theatrical plays, and other tales were written for her.

A tomb named after her stands at modern Lingbi County, Anhui province.

During the Northern Song Dynasty, she was named Consort Yu due to a composition writing about her grave by Su Shi. In his tale, he addressed her as "Yuji" and wrote about Xiang Yu's distress in the possibility of leaving her. From this time period, there is also the famous tale in which she performed a sword dance after hearing the Song of Gaixia. To avoid being a further hindrance to her lover, she committed suicide by impaling herself during her performance. Before doing so, she reportedly sang the following verse to counter her lover's poem (translation taken from Wikipedia):

漢兵已略地，
The Han army has conquered our land;

四面楚歌聲。
We are surrounded by Chu songs;

大王義氣盡，
My lord's spirits are low;

賤妾何聊生。
Why then should I live?

According to legend, the spot where she was buried after her suicide bloomed with bright red flowers. Thus, the field poppy is also commonly known to be named after her, either as Yu Meiren Cao or the simplified Yu Meiren, in China. In honor of the story the poppy can mean fragile yet ardent love, feminine charms, kind consolation or delusions in the flower language.

Tales regarding her beauty began more recently during the Qing Dynasty, which state that her looks could cut through the chaos surrounding her lover. Her status as a tragic figure have many residents in China argue that she could be a liable candidate for the Four Great Beauties, sometimes replacing Diaochan's spot.

Xiang Yu's devotion to her is also known in the Tales of the Heike. They were mentioned by Taira no Shigehira after he listened to a sorrowful biwa performance from the maiden Senju no Mae. He sympathized with her strife and quoted the Song of Gaixia. Later, he refused to have her talents go to waste and offered her to become his maid. 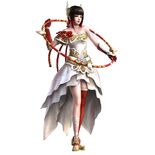 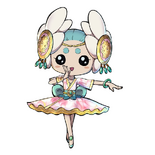 Rise of the Phoenix portrait