Pirate Empress Boa Hancock (海賊女帝 ボア･ハンコック, Kaizoku Jotei Boa Hankokku) is the only female member of the Seven Warlords of the Sea. She is the Snake Princess of Amazon Lily and rules over the Kuja tribe with her two younger Gorgon sisters, Sandersonia and Marigold.

She was first mentioned by the Risky Brothers at the end of the Thriller Bark Arc and is considered by many to be the most beautiful woman in the world. While she currently remains employed within the Seven Warlords of the Sea, her love for Luffy has caused her to turn against the World Government on a number of occasions, thus putting her status of Warlord at risk.

: Kicks to the left with her right leg, then leaps up and does a diagonal kick to the left. She then does two forward cartwheels, kicking enemies with each one. She finishes with a wide right-to-left kick.

: "Pistol Kiss": Hancock does a backflip kick to launch enemies and herself into the air. She then fires a continuous barrage of hearts at enemies. She finishes by waving her hand right-to-left, firing continuous heart projectiles that will petrify enemies if they hit.

: "Snake Slam": She does a backwards cartwheel. She then leaps high into the air and lands down hard onto the ground, knocking back enemies. Her snake will then come forward and start to slither around in a circle rapidly for 3 seconds, continuously juggling enemies caught inside. The snake then uses its tail to grab a single enemy, and slam him/her down hard onto the ground.

: She creates a pink arrow with a heart as the arrow head. She then draws it back, using her snake as a bow. Hancock then fires the heart arrow forward, petrifying any enemies it hits.

, except Hancock fires out 5 hearts that spread in an arcing motion.

: Hancock's snake sweeps out in front of her in two circles, followed by her leaping up and standing atop her snake's head to do a wide kick to the right.

: Hancock leaps into the air with a flip and comes down hard onto the ground with her foot. If her foot hits an enemy on the way down, she will proceed to continuously step on him/her in a sadistic manner, while the enemy emits hearts out of him/her. She finishes by kicking the enemy away.

: "Snake Pit Dance": Hancock's pet snake sweeps to her front and starts slithering in circles very rapidly, juggling enemies inside. Hancock then blows a kiss forward in the form of a heart projectile, petrifying any enemies it hits.

: Level 1 Musou: "Slave Arrow": Hancock kisses her fingers to create a large pink heart in front of her. She then pulls and stretches the back of the heart, drawing it like a bowstring. When she releases, many smaller hearts are shot forward, petrifying enemies. Does not petrify enemies who are immune to petrification.

: Level 2 Musou: "Perfume Femur": Hancock spins around on one leg in a figure-skating-esque motion, using her other leg to kick enemies around her as she spins furiously. She finishes by petrifying enemies in a very large radius around her.

R1 (Special Skill): "I'm scared...": This is a counterattack. Hancock will strike a cute pose, pretending to be scared and weak. If she is attacked during this pose, she will counterattack by shooting a heart beam and petrifying enemies.
R1 (Special Skill during Kizuna Rush): Love-Love Mellow: Hancock blows a stream of energy hearts out at enemies. When struck, they will be turned to stone.

Boa Hancock ate the Love-Love Fruit, a Paramecia-type Devil Fruit that allows her to petrify her targets by turning them to stone. However, there is a pre-requisite in order for the effect to work: the target has to hold indecent thoughts about her. Otherwise, they will feel as though nothing happened, rendering her Devil Fruit useless against such targets. Her fighting style mainly revolves around her shooting out heart-shaped projectiles at enemies to petrify them, as well as incorporating her exceptional hand-to-hand combat. She seem to be fond of kicking techniques. Her pet snake Salome also aids in her combat, often helping her out in several combos by smacking enemies around and grapping them. On top of her Devil Fruit and her physical combat prowess, Hancock also possesses all three types of Haki, and has mastered them. 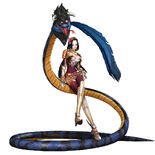 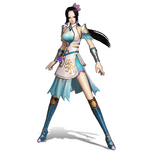