Not to be confused with the eunuch, Cao Jie

Cao Jie (曹節, onyomi: Sō Setsu) is one of Cao Cao's daughters and another of Emperor Xian's imperial consorts. She eventually would become the Eastern Han Dynasty's final empress. When her brother forced Emperor Xian to abdicate, and demanded her for her seal, she remained loyal to the Han and rebuked numerous envoys asking for it.

Introduced in Sangokushi 12, Cao Jie is a female officer of Wei who has above average stats in politics and intelligence. The game lists her birth year as 190. Although an capable officer, her stat for WAR is the lowest among all the officers in the game. The fourteenth title raises her LDR and WAR stats but not enought to the point where she'll be able to handle battles on her own. Her POL, INT and CHR are high so Cao Jie can act better developing commerce, agriculture or employing officers. In battle she is stuck with the crane formation which is ideal to conquer enemy territory and maintain supply lines but should avoid direct combat.

Cao Jie was Cao Cao's fourth daughter. Her mother is unknown, but most people speculate that she could have been Lady Bian. In 213, she and her sisters, Cao Xian and Cao Hua, became consorts to Emperor Xian. After Cao Cao had angrily executed Empress Fu Shou for conspiring against him, Cao Jie was gradually escalated to empress to replace her and became known as Empress Xianmu.

According to the Hou Han Shu, Cao Pi demanded her imperial seal when he forced the Emperor to abdicate in 220. The Empress was infuriated and refused to relinquish it. As more envoys were sent the Empress took them all into the chambers. She then proceeded to rebuke them time and time again, before finally tossing the seal onto the floor, her face covered in tears. She shouted to the ministers; "May Heaven not protect your reign!" Those present did not dare to look upon her countenance. 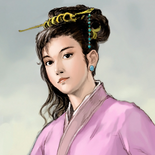 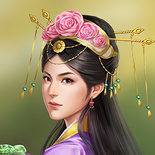 Romance of the Three Kingdoms: The Legend of Cao Cao portrait
Add a photo to this gallery
Retrieved from "https://koei.fandom.com/wiki/Cao_Jie?oldid=437141"
Community content is available under CC-BY-SA unless otherwise noted.