The Chōsokabe clan (長宗我部氏, Chōsokabe-uji), or the Chōsokame clan according to the Oyudono no Uenonikki, was one of the many powerful clans that was known to exist during the Warring States period. Its political power diminished after the fall of the Toyotomi family.

Their clan's origins are largely unknown and not clearly recorded. The earliest known recording of the Chōsokabe clan's existence was a samurai named Yoshitoshi, a man who existed sometime during the Heian Period. The popular theory regarding the clan's origins states that the founder was a descendant of Hata no Kawakatsu, thought to be a member of the Chinese immigrant clan within Japan. These theories postulate that it's possible that the Chōsokabe clan's founder was a descendant of Shi Huangdi. However, family records fail to clearly distinguish the link between Yoshitoshi and the Hata clan due to lack of information regarding Yoshitoshi's father, so this theory is hard to support. Even so, the early family history of the clan during the Heian and Kamakura Periods lie in mystery. There is no known records that so far describe this clan's early history in lengthy detail.

What is known was that the clan once called themselves the Shu or Sokabe (宗我部氏) during its early formation. Since they shared the same name of a different clan in the Kami District, the name for both clans were altered. The Sokabe named themselves after the Nagoka District and were called Chōsokabe; the Sokabe in Kami called themselves the Kōsokabe. During the Nanboku-chō Period, Nobuyoshi (the predicted clan head of the time) served under Ashikaga Takauji. He was ordered with other retainers to fight against the southern court in Tosa. Control of the province was granted to the Hosokawa clan, and the Chōsokabe clan faced extinction during the early years of the Warring States period. The sole heir, Kunichika, fled to safety within the Ichijo clan. With their help, the Chōsokabe family name was reestablished.

When the ruling governor of Tosa, Hosokawa Masatomo, was assassinated in 1507, the land was without a governor. The seven prominent clans of the time eyed for the right to reign in an uneasy stalemate. Each clan fought for their part of Shikoku and helped one another to oust the Hosokawa's influence from spreading across the island. These clans in Tosa include the Chōsokabe, the Kōsokabe, the Yamada, the Motoyama, the Aki, the Tsuno, the Kira, and the Ichijo. Among them the Ichijo held the most wealth and property, unofficially assuming the right. However, Motochika turned the tides by strategically defeating his rivals and uniting the island. It's commonly assumed he and his clan became the rulers of the island, although his method of conquest is frequently disputed.

Motochika defended the island against the Oda and Hashiba invasions, but surrendered to the invaders on the second attempt. Due to losing his eldest son to war, his fourth son, Morichika, was the one to succeed him after his death. At the time, the tensions for Sekigahara were on the rise. Morichika initially wanted to side with Tokugawa Ieyasu, but stayed within Ishida Mitsunari's leadership due to his secret messenger's capture. When Osaka Castle fell, Morichika and his offspring were killed or executed. Ergo, the clan's political influence had ended with the Toyotomi's fall.

Survivors of the Chōsokabe's bloodline purportedly existed in the Edo Period. Whether this is true or not is unknown. 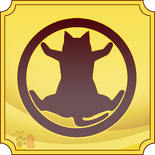