Daryun (ダリューン) is a major character in The Heroic Legend of Arslan and a playable character in Arslan: The Warriors of Legend.

His military career has been decorated with many epithets –such as "the knight amongst knights", "fierce tiger general", and so on– in ode to his peerless martial prowess and devotion to duty. After he is deposed for questioning his king's rash march against the Lusitanian army, his uncle entrusts him to protect Arslan. Daryun swears loyalty to the prince henceforth and becomes one of his most trusted followers.

He has a character image song titled Tatakai, Sore wa Kishi no Shinjitsu.

Daryun is popularly known for his sensible fortitude, unbreakable loyalty, and his respectable and spartan conduct. He carries himself with a honest and straightforward temper; at times, he might be unable to keep himself in check. His companion and war horse is Shabrang (黒影号); they are hardly seen apart on the battlefield.

When Arslan is pensive over his proceedings, Daryun is usually there to support his liege with soft words of mental encouragement. The general appreciates his lord's mercy and perceptiveness as he serves him. Within the Parsian military, he is friends with Kharlan, Narsus, and Kubard. Though he is chummy with his fellow generals, Daryun is openly sarcastic towards the strategist.

R1 (Unique Skill): Stabs his spear towards an opponent. If he connects, he will swing them atop of the spear's bladed point before hurling them away.

: Daryun does three diagonal energetic slashes with his spear then thrusts forward to blow enemies away.

for more stabs. Daryun ends the sequence with a leaping overhead slam of his spear

: Turning swing that knocks enemies far away from him.

: Crouching swing to the left that launches foes into the air.

: Twirls spear above his head and turns for a horizontal swing to knock enemies back.

: Two diagonal swings. Turns to hit enemies in front of him with the butt of his spear. Faces his front for a horizontal swing. Spins for a diagonal swing before ending with a powerful spear thrust.

: Levitates into the air before he plummets to plant his spear head into the ground.
Dashing

: Sliding spear stab.
Charge Shift: Spins into a whirlwind stab. Performs the rest of his normal attack chain. The last hit will be a Fire elemental.

: Daryun runs forward and swings his spear to stun enemies.

): Daryun swings his spear horizontally to the right before stabbing upwards.

): Daryun swings his spear down, juggling enemies, then jumps into the air and swings the spear to the right.

): Stabs forward to send a wave of blue energy forward. Daryun twirls his spear before he slams it back down again.

: Daryun swings his spear to the right of his saddle three times. He twirls his spear above his head to generate a whirlwind. He then has Shabrang hop to smash foes with his front hooves.

(during Power Sprint): Downward spear thrust before he twirls spear above his head. Daryun swings his spear horizontally to his front. Shabrang spins to a stop and kicks foes with both of his back hooves.

: Rising slash followed by a hopping overhead chop to slam the ground.

: Crouching arching slice that launches foes. Daryun will have his back open to foes who block.

): Diagonal slash that launches. He follows with a hopping horizontal slash that sends enemies further away from him.

: Hops into the air and spins for an overhead slash. Slams the ground and hits foes beneath him.

: Turning horizontal slash that has Daryun hop back. He follows with a stab that shoots out a blue wave of energy forward.

: A quick two-handed slash to his right.

: Winds his arms back in the air before diving. When he lands Daryun performs a horizontal swing. Fastest way of getting down a staircase.
Dashing

: Upward stab that blows enemies away. Daryun needs a moment to recover before he can move again.

): A hopping overhead chop. He then stabs forward to shoot a blue wave of energy.

): Vertical cut that launches opponents. Daryun hops after them and follows with two diagonal slashes. He sends his airborne foes back down with a turning slash. Daryun needs a moment to recover when he lands.

: Shoots a single arrow that knocks enemies back.

: Fires a stunning arrow from a crouched position. The arrows cut through multiple enemies.

to fire more arrows. Daryun fires a single arrow that pierces through multiple enemies to end the chain.

): Fires three powerful arrows. Daryun stands straight while drawing his bow for a powerful shot. It cuts through crowds.

: Flips before he dives for a sliding kick.
Dashing

: Slides to a stop to fire three arrows.
Charge Shift: Spins into his normal attack chain. The last attack will fire more arrows than normal, be a Fire elemental attack, and have a whirlwind surround Daryun.

): Shoots a single arrow that pierces through crowds. Crouches to fire another similar arrow.

: Hops into the air to fire two powerful volleys of energy arrows below him. Daryun needs a moment to recover from his landing.

): Flips into the air to fire a powerful energy arrow below him. He lands for a spinning kick and crouches to fire five arrows in front of him.

): Shoots a powerful energy arrow on the ground to launch foes. He quickly shoots three skyward arrows that send them flying back.

No Helmet - No Mantle 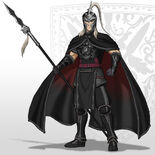 Retrieved from "https://koei.fandom.com/wiki/Daryun?oldid=430127"
Community content is available under CC-BY-SA unless otherwise noted.