Deng Chanyu is Deng Jiugong's daughter and Huang Tianhua‎'s childhood friend. A strong minded woman who is skilled in the martial arts, she becomes infatuated with Taigong Wang.

In Mystic Heroes, she is called Mirah in the English port.

When Taigong Wang's party approaches the third gate, they expect to have safe passage due to Huang Feihu's old friend, Deng Jiugong. However, the Shang general orders his men to attack. Before the party can deal the finishing blow, Deng Chanyu runs in and teleports her father to another location with her magical gems. As both parties decide to retire for the night, Deng Chanyu visits Taigong Wang. She states that her father has turned into a completely different person since a mysterious woman entered their home. She pleads the strategist to rescue her father and sneaks them past the gate. The woman in question turns out to be Wang Guiren, who has Deng Jiugong held captive. Wang Guiren kills her father before Taigong Wang could help and they only succeed in driving Da Ji's sister away. After the battle, Deng Chanyu mourns for her father and desires to be left alone. Touched by Taigong Wang's sincere apology, however, she decides to accompany him to West Qi.

As Taigong Wang's army marches towards Morning Song, they take a break in the mountain's river. Unknowingly they drank water that was altered by the Four Lu Xue brothers. The people who drank the water either experience severe body pain or fight one another until both are unconscious. The only people who didn't drink the water are Taigong Wang, Deng Chanyu and Princess Longji. While the princess hurries to retrieve a cure for the water's ill effects, the couple protect the sleeping army from the Lu Xue brothers. Once the army is back to their senses and the brothers are slain, Deng Chanyu admits to the army's leader that she only had the courage to fight since he was with her. Before she can openly confess anything else, Lei Zhenzi interrupts.

After the final battle, she decides to join Taigong Wang's journey with the claim that she is a "hopeless damsel" in need of an escort. She quarrels with Baihe Tongzi as Taigong Wang leaves both ladies to start his quest.

Deng Chanyu continues to follow Taigong Wang in Fengshen Yanyi 2, but she loses sight of him when he teleports to save Ziya's village. Hearing that he was last seen at King Wu's palace, she questions his whereabouts. She hears that he is missing and forces her way through the capital's gates and passes to search for him. When Ziya's party reaches her, Huang Tianhua mentions that they are also looking for Taigong Wang so she joins them. When they finally find the wounded strategist, he asks her to fight the Nine Dragon Sect in his place. After the final battle, she leaves together with Taigong Wang to repair the human world.

As someone who knows what she wants, Deng Chanyu is a sometimes bossy woman. Forceful and slightly tomboyish, she is also caring and amicable. She claims to be a weak woman, but she is actually just as strong as any of the warriors in the games. Though portrayed as a little naive in her first appearance, she gains an air of elegance in her later appearances. While she has strong feelings for Taigong Wang, they are not always returned in a manner that pleases her since his sense of duty usually tears them apart.

An old friend of Huang Tianhua, she sometimes mentions various tidbits of their youth together, such as him being a crybaby and her being his crying shoulder. As they both respect Taigong Wang, they sometimes have minor arguments over who knows the most about him.

"Really? I didn't hear it that way from Taigong Wang. He told me you forced him to take you, and he couldn't handle it. He left you behind so he could get some privacy."
"Hey, Tianhua! Don't butt into my story. You're messing up the good parts!"

In the first game, Deng Chanyu is the fastest party member. She has a below average life and defense, but she has overall balanced stats. She is a good backup healer and her high luck helps her cast successful status magic. She is one of the characters in the party who can move six squares, making her more versatile than others. Her personal skill allows her to hurl five colored gems to damage her opponents.

She changes her weapon to a fan in Fengshen Yanyi 2 and her gems appear as elements in her combination attacks. She loses the ability to use magic paopei and is given an aggressive AI. Her attacks have a light element attached to them. If she is in the party, she can barter for a discount at the town's shop. Deng Chanyu's special battle ability neutralizes enemy attacks and draws them closer to her for a limited time.

In Mystic Heroes, her attacks change to fire.

The following lists her starting weapon and magic proficiencies in Fengshen Yanyi.

Here are her battle statistics in Mystic Heroes.

Deng Chanyu was Deng Jiugong's beautiful daughter who was skilled in sword fighting and manifesting golden pebbles to wound her foes. Armed with a long sword, she accompanied her father's siege on West Qi City in chapter 53. When her father suffered a serious injury from his first attack, Deng Chanyu approached the city gates the following day and challenged her enemies to a duel. Nezha and Huang Tianhua met her offer, confident that they could easily overpower the woman, and both suffered defeat on two separate occasions. Her father was pleased by her victories and celebrated merrily for her, in spite of his own wounds. On the third day, her opponent was someone who shared the same skills as she did, Dragon Beard Tiger. Their fight ultimately had Deng Chanyu as the victor. Before she could slay him, Yang Jian intervened. As he was unaffected by her hard pebbles, he ordered his Celestial Hound to bite her neck. Deng Chanyu was forced to retreat back to her army's camp.

She and her father were magically healed by a then low-ranked member of their troops, Earth Traveler Sun. The boy was armed with mystical remedies, artifacts, and speed that gave him advantage over the mystical army at West Qi. After capturing Nezha and Hiang Tianhua, Earth Traveler Sun was honored at a banquet. Deng Jiugong, who was drunk from the many hours of wine, promised the lad his daughter's hand if he could subjugate West Qi. Earth Traveler Sun took the words to heart and tried to take down King Wu's city by himself. Yang Jian used his shape-shifting powers to trick the lad and captured him. As negotiations between both parties began, Deng Jiugong was reminded of his careless promise to Earth Traveler Sun as the lad's master foresaw that the marriage between the two youths was predestined. Angered that Jiang Ziya was trying to play matchmaker with his precious daughter, Deng Jiugong agreed to use deception to save her from the marriage, feigning approval of her consent in an effort to assassinate Jiang Ziya. The Prime Minister saw through the ruse, created an ambush of his own, and ordered Earth Traveler Sun to capture Deng Chanyu as soon as he heard a cannon (Deng Juigong's signal for his respective ambush). When their schemes were put into effect, Deng Chanyu was kidnapped and Deng Juigong's army was low in numbers. Realizing her fate to marry the lustful Earth Traveler Sun, she wept bitterly but consented to the marriage only to honor her father.

After Earth Traveler Sun had his way with her for a night, she asked permission to speak to her father and convince him to surrender. Knowing that Deng Juigong was demoralized and wanting to prevent a future defection from the new wife, Jiang Ziya allowed the visit. Escorted with a large army of Zhou troops, she was permitted entry into her father's camp. She informed her father of her marriage to Earth Traveler Sun and rationalized that Shang reinforcements would not come to their aid in time. Upon reflecting on the regret and humiliation of the situation, Deng Juigong agreed to her daughter's reasoning and surrendered to West Qi. Both daughter and father resolved to serve King Wu.

Deng Chanyu would accompany her husband when the Shang army was attacked by Su Hu's general, Zheng Lun. While Earth Traveler Sun was paralyzed by their foe's beams, she saved herself from being taken captive by wounding Zhang Lun with one of her pebbles. She would continue to fight in King Wu's army until she was the last person to be killed by Gao Lanying. When Jiang Ziya was naming gods, she was named the Goddess of the Six Combinations Star (六合星). 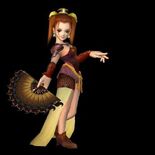 Mystic Heroes render
Add a photo to this gallery
Retrieved from "https://koei.fandom.com/wiki/Deng_Chanyu?oldid=433335"
Community content is available under CC-BY-SA unless otherwise noted.