Dodomeki is a supernatural monster listed in the book series, Konjaku Gazu Zoku Hyakki. The ghost is described as a pale, lanky woman with no facial features who has elongated arms adorned with thousands of eyes.

Copies of him and Gyūki in the Warriors Orochi series serve as members within the Orochi forces. To unlock him in his debut, the player must collect 5 "treasures"; both he and Gyuki were initially limited to Survival and Versus modes with incomplete movesets. Musou OROCHI Z has them playable in every mode with complete movesets. He can be unlocked in Warriors Orochi 3 by viewing at least one ending.

He is given a dream stage with Da Ji and Gyūki in Z, where the trio work to free Orochi from the grasp of the mystics at the Wuhang Mountains. Once Orochi is freed from his prison and rid of Taigong Wang's forces, the Serpent King begins to fuse the worlds together, relishing the idea of fighting man's greatest heroes.

The third title has Dodomeki often entrusted with important tasks. He often is paired with Gyuki in battles to aid him with objectives set to them by Kiyomori. In one of the past timelines, he is one of the officers who act as Orochi X's last line of defense. When he is unlocked, Dodomeki states that he seeks to atone for his crimes in the main camp.

During Ultimate, he joins Da Ji, who now creates clones of the Coalition's army to create chaos. Their troubles eventually lead them to be attacked by the Oda forces at Nanjun, but the demons soon witness the stone's prisoner, Tamamo, emerge. Like Gyūki, he is amazed to see her seal Nobunaga and his officers within her Divine Mirror.

In Warriors Orochi 4, he and Gyūki become Himiko's guardians, protecting her from both the Coalition and Ares's army. When Da Ji arrives to help Himiko at Jing Province, both he and Gyūki end up returning to the demon army, and fall under Orochi X's direct command when he is resurrected at the Mystic Realm.

When Orochi X is defeated by the real Orochi, who is then slain by the Coalition, Dodomeki and the other members of the Demon Army join the Coalition, hoping to keep themselves from being destroyed by Odin for Ragnarok.

Not much of Dodomeki's personality is explored outside of battle in the first few games. He is shown being calm, cool and calculating towards his enemies while fighting. In the third installment of the series he is shown having a slightly softer side once having joined the coalition. He enjoys spending time with the humans and during banquets he won't hesitate to tell others that he is enjoying himself. He has a speech pattern similar to that of Zhou Tai and Hanzō Hattori, keeping his sentences short and to the point, while keeping the tone of his voice low and calm.

Dodomeki shares a bond with Rachel. In Ultimate, he develops a friendship with Hundun as well. The latest installment has him and Diamondback create multiple schemes to try and make themselves stand out, and the two compliment each other despite their genericness. Himiko often attempts to assure Dodomeki that she believes he's still unique in his own way.

Dodomeki's third weapon takes its namesake from Ongyōki, one of the four demons who served Fujiwara no Chikata. They appear in several myths, but they are mentioned by name in Taiheiki, a gunki monogatari of the Heian period. Each demon had different colored skin and unique abilities. Ginki was a golden colored demon whose hardened skin could repel any weapon. Fuuki was a reddish tinted demon who had the power to control the winds, blowing away any enemy who opposed him. Suiki was an azure tinted demon who could manipulate the waters at will and flood anyone who opposed him. Ongyōki was a dark colored demon who could conceal his own body completely to ambush his foes. Using these four demons, Chikata opposed the imperial family and conquered Iga and Ise Provinces. He was unstoppable until a song to deliver heavenly punishment was attached to the demons' necks. As his supernatural servants dispersed, Chikata suffered a quick defeat. Legends also identify the demons as legendary ninja. As a side note, these four demons appear within Orochi's army using the generic Orochi general models.

His fourth weapon is named after a phrase used in Japanese mythology to exile someone or something from a particular plane of existence. The first part of the phrase is "god night", literally meaning that the gods will turn a blind eye to the one who is banished.

"They will be the last thing you ever see."

"You're funny. You really think you can eliminate me? I'll crush you like a bug."
"You are formidable, woman."

"Oh, please, don't mention it! I didn't do anything anyone else wouldn't have done."
"You have always been so good to me, even though I'm just a bit-part demon..."
"You idiot! You mustn't call yourself a bit-part demon! Everyone is the star of their own life story! You have your own good qualities!"
"My own... good qualities...?"
"Of course! I mean, you're cute like one of my little clay statues, and you're so adorable when you get all, y'know, warghh..."
"Oh...! What do you mean, all warghh...?"

): Stretches his arms to the ground to push the rest of his hunched body forward, then does a forward slap with both arms.

): Extends his arms to stab six times, ending with a rising stab. Hurls a dark wave of energy forward on the last tap.

): Spins his arms to hover into the air at a diagonal angle. Leans forward and propels himself in the air with his helicopter arms.

): Swings with one arm to perform a low kick. Raises to his feet to send a burst of energy forward.

: Dashes forward while striking with both gauntlets. Poses by crossing his arms. In his true musou version, he ends with three additional kicks.

: Elongates both arms and slaps forward.

: Aerial dash. Dodomeki leans into a position parallel to the ground and spins.

: Turns in the air and sends a white ball of energy forward.

: Flips himself upside down in the air to smash the ground in a handstand position. Flips to his feet.

Warriors Orochi 3
R1 : Grabs the enemy before striking them with an unblockable attack.

, R1 (Ultimate only): Stretches both arms in time to perform a spinning attack.

: horse rears its legs and smashes the ground with its front hoofs.

: Strong slap to his right.

: Hurls a green smoke bomb to his right. Stuns foes.

: Extends both arms to hit both sides.

: Series of swings of his gauntlet to his right.

: horse stampedes forward while surrounded by a destructive energy.

He appears as a ninja general whose moveset resembles Kotarō's at first glance. 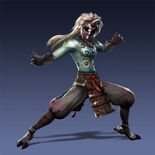