Dragon Quest Heroes II (ドラゴンクエストヒーローズII 双子の王と予言の終わり, Doragon Kuesuto Hīrōzu II Futago no Oh to Yogen no Owari, subtitle translated as "Twin Kings and the Prophecy's End") is a derivative sequel to Dragon Quest Heroes that has a new world setting and narrative. It was first revealed online through its early official website launch on April 1, 2015. It is one of the projects that celebrates Dragon Quest's thirtieth anniversary.

The same creators for the first game are returning for this title.

This game was awarded the gold prize in the PlayStation Awards 2016.

The story takes place in a peaceful land of seven kingdoms. Suddenly, as though enchanted by an ancient prophecy, the kingdoms wage war. The heroes from different kingdoms band together to restore peace to their torn continent.

World exploration has been changed to resemble the typical Dragon Quest experience. Players can move their party to visit towns, wander the world map and initiate battle stages (similar to dungeons). Seamless random monster encounters may break up the pace between locations. Special ingredients and treasure boxes can be discovered across the world map. Weather can fluctuate and affect the party's status. Rainy days inflicts a curse ailment on the party during battle.

Characters can now dash to wherever they please, but certain areas will be blocked until the player proceeds with the main story. As the players proceed with the main story, they can unlock "Invitation Stones" on the world map. These monuments allow the party to instantly warp to previously visited locations.

Zelbion acts as the new main town. One major change from the previous game's features is the class change feature for the main protagonists. Switching classes changes equipment types and potential skills for each protagonist. Known classes include martial artist, mage, monk, thief and warrior. The weapons merchant can teach random weapon skills to the protagonist, depending on their proficiency with each weapon type. Individual weapons and outfits have all been changed to only provide aesthetic changes. Accessories can still be strengthened to alter stats.

Battle stages are mandatory for progressing the main story and behave like battle areas from the previous title. Parties can still be changed by talking to Patty in her bar. Two player co-op is now available for the main story by selecting the "Assist" option in the main battle menu.

Alternatively, players can work together to complete the new "Time Labyrinth", a series of multiplayer exclusive stages aiming to appeal to longtime Dragon Quest fans. It is unlocked by finding labyrinth map pieces scattered throughout the main story. Talk to Erinn in town inns to set up online matching or send invites.

Up to four players can play together for multiplayer missions. Online chat is not available, but players can select common stock phrases to communicate. Fallen party members can either be resurrected by "Leaves of the World Tree" or raise their alive companions' health and Tension by cheering for them. Players can work together to find more map pieces or defeat difficult bosses. Metal Slimes have a higher chance of appearing in these missions.

Cross-platform play options and save data sharing are present. Having save data from the previous title grants Luceus and Aurora costumes for this game's protagonists. Dragon Quest Builders save data grants "Builders Wooden Hammer" for the protagonists' use. Downloadable content so far includes costumes, weapons, and multiplayer options. DLC can be accessed by talking to Manemane in town.

Tomohiko Sho and Ryota Aomi presented the game at Dragon Quest The Live in Osaka February 24, 15:00 (JST); they were joined by Hiroki Yasumoto and Yui. Other teaser live streams with the main cast were held April 8 (JST) and May 1 (JST).

Two premium trial conferences was held April 9~10. 620 interested PlayStation Plus users or Square-Enix Members were eligible for preregistration. The press conference for the game's completion was held at Teikoku Hotel on May 26 (JST) and simulcast to Nico Nico Live. Horii, Aomi, Sho, Mirai Moriyama (Razel), Emi Takei (Teresia), and Takayuki Yamada (Ceser) were present to commentate and celebrate the game.

V Jump is posting their series of early video coverage of the game onto their YouTube channel. Other supplementary videos include interviews with key voice actors.

Lawson stores are hosting a limited time campaign for Dragon Quest's 30th anniversary. Purchase Homi Flavored Fried Chicken to receive a code on the package. On May 27, fans can enter this code on Dragon Quest Heroes II's official site for a chance to win a golden slime figurine and pouch.

Comedian Knights Hanawa and gravure idol Chiaki Kyan star in an Amazon Prime original series called Delivery Game Corporation; its starting coverage will be this game. The first two episodes can be viewed for free until May 26, 2016.

PlayStation Japan hosted a chalk drawing of monsters done by Renarena at Shinjiku Station. Fans can "destroy" the monsters by Retweeting about it on the official hashtag. Their goal (5,000 Retweets) has already been met, so the monsters were "vanquished" by Lot's Sword. A drawing of the main playable cast replaced the cleared chalkboard on the game's release day.

A Homiron doll for this game will be available for purchase on May 27. Square Enix e-Store is offering other merchandise exclusive to their store. 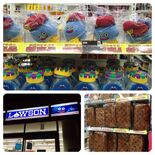 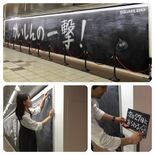 Aomi's photos of the erased blackboard 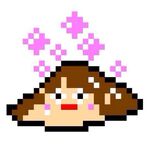 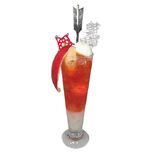 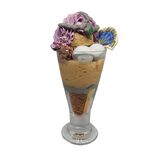 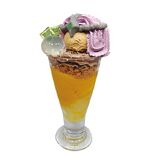 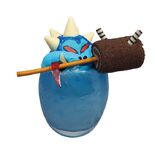