Before the first game was conceived, Omega Force members were originally planning on making a brand new action game completely unrelated to history. However, since many of Koei's employees are fans of the Three Kingdoms era, the concept of a Three Kingdoms action game was unconsciously made by the team. There were talks over whether they should develop the game in-house or pitch to another developer, but Omega Force won out.

When the developers wanted to port the fighting game to the PlayStation 2, they had second thoughts due to the fighting game boom at the time. To make themselves stand out, they envisioned a battlefield scenario and focused on the prospect of the player working with a team to fight against several opponents at once. After they decided to incorporate more elements from the Three Kingdoms era, it eventually became the hack-and-slash hit that it's known for today.

To establish a distinct difference between the first game, the word "true" (真, shin) was inserted for the second title. Hence, the Japanese title for Dynasty Warriors 3 is actually Shin Sangoku Musou 2 and so on. Omega Force considers the Shin titles as the true start of the brand. Any series anniversary that they celebrate will be based on Dynasty Warriors 2's sales date.

Though listed under the action game genre, creators strove to make the series a "fusion of real time strategy and action". Eventually, the series's appeal was allowing the player to be a "one man army" versus the thousands of enemies in ancient China. Kou Shibusawa states that it was his personal desire to capture the excitement and thrill felt by the events in the novel. The series started its own type of genre. In the east, games similar to it are referred to as the Musou franchise. The English equivalent for the same term is Warriors series. Keeping in touch with the core ideas of its fighting game counterpart, the Dynasty Warriors series is designed to always be inviting to beginners to either the series or the action genre. The new features that are added into the series strive to never be too complicated, hoping to add another entertaining aspect for every type of fan of the Warriors games.

A recent Dengeki PlayStation interview reveals that the development team look at other Three Kingdoms period media frequently in between designing each entry. They also don't have a formal team of historical researchers like the ones seen in Koei's historical simulation titles. However, developers do rely on other novels, books and movies they have personally read or seen. A particular individual in the Omega Force team also knows the time era "like the back of their hand". Whenever they ask the person questions, he/she can correctly identify a particular place, person, or battle on the spot.

Characters are color coded by default to match the particular faction they serve. When told by a fan that the idea should be abandoned and to be more liberal like Samurai Warriors, the series producer defended the color choices since they serve as an easy method for distinguishing characters and their alignments. He would rather these tints serve as a political symbol of sorts than a completely driven aesthetic choice. 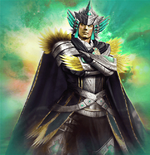 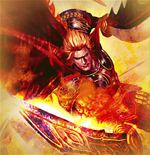 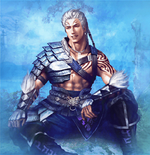 Koei published a twelve volume fanbook series titled Dynasty Warriors Communication (真・三國無双通信, Shin Sangoku Musou Tsushin). It contained information about the developers, gag comics, official illustrations, and fun tidbits for fans. When Samurai Warriors came out, the two franchises shared a similar publication titled Musou Fan Field (無双FanField). A miniature novel series for the Romance of the Three Kingdoms was also included. Two drama CDs based on Dynasty Warriors 4 were made surrounding the battles at Chi Bi and He Fei.

Gamecity also published a light novel dramatizing the CD's events. A free sample of the light novel can be read in Japanese here.

A Dynasty Warriors themed PSP protective pouch was also created by Koei in 2006.

Downloadable content for these games can be found in the DLC category. 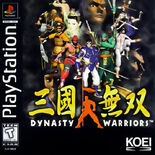