Like its predecessor, the overseas version only features Japanese voice tracks with subtitles despite it having been formerly announced that English voice acting would be included.

The entire Xtreme Legends cast returns with at least one new addition from the second most wanted character poll.

A Twitter campaign to guess the new character addition was held June 5~16. Three accurate fans won a free copy of the game.

Fans who have downloaded the edit trial can participate in a edit character contest throughout October and early November. Contestants are asked to create their interpretation of a person/character from history or Romance of the Three Kingdoms. Five winners will receive a copy of the game's complete guide and Dynasty Warriors 8 badges.

Shin Sangoku Musou 7 Duet Songs will include five character image duets with the five factions, character messages, and voice actor commentary from characters in this expansion. Purchase the first copies of the CD to receive a chance to redeem a possible ticket to the Shin Sangoku Musou Seiyuu Ranbu 2015 Summer voice actor event. Consumers who purchase the Deluxe Edition of the live event's DVD recording receive an additional photo book of the event and three character stickers.

Halloween themed character merchandise were up for sale at Tokyo Game Show 2015.

LINE stickers featuring the cast are now available for purchase. They are divided into three sets with each one containing 40 different sticker images. 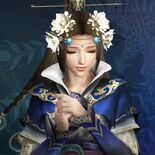 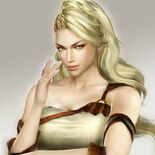