Farangis (ファランギース) is a major character in The Heroic Legend of Arslan and a playable character in Arslan: The Warriors of Legend.

On the day of Arslan's birth, it was prophesied that a priestess of Mithra shall be ordained the prince's guardian. Farangis was chosen. She suspects she was formally dismissed due to the other priestesses' jealousy of her beauty, yet her personal disdain for Lusitanian practices urges her to duty. Farangis converses with the spirits and uses her might to protect Arslan.

Cool-headed and candid Farangis is a perceptive woman of grace. She favors rationality and fairness in life, seeking to restore harmony to the people and spiritual world. If danger encroaches her or her allies, however, Farangis has no inhibitions taking arms. Battle is a necessary evil to defend her values and to end the war. Acknowledging her beauty and its unintended effects on others, she takes no pride in it. She can also hold her liquor and can remain sober against the heaviest drinks.

Though driven to him by her mission, her loyalty towards Arslan becomes genuine as she gets accustomed to the prince's judgments. Gieve and Kubard wish to woo her, and she tends to stomp on their advances in a heartbeat. The lone man who did warm her heart, Eagleelus, died many years before the main setting; her love and affections still remain with him.

R1 (Unique Skill): Stays stationary. Hold down R1 to aim with her bow. Let go to unleash a wind charged arrow at her opponent. Element will have no effect if she misses.

: Plays her flute to summon djinn and then fires three energy arrows in three directions in front of her.

: Fires an arrow into the ground, causing an explosion of spiritual energy.

: Crouches and fires a single arrow that launches enemy upwards.

): Shoots an arrow and leaps backwards. Farangis hops into the air to shoot a powerful shot in front of her.

): Crouches for a powerful arrow. She twirls before firing another arrow that explodes upon impact.

: Hops up and shoots three arrows that burst with spiritual energy.

: Flips and fires a powerful arrow in front of her.
Dashing

: Arches her back to fire three arrows.
Charge Shift: Turns and fires a whirlwind in front of her.

): Shoots a spirit charged arrow forward. Then charges for another shot. The second charge can be held and aimed for an accurate hit.

: Shoots upwards and a rain of arrows showers around her.

: Shoots an arrow to the left of her saddle.

again to let her fire a powerful shot.

: Two criss-cross slashes that launches opponents. The spirits will continue to dice her airborne foe.

): Walks forward while twirling her sword, alternating between her left and right. She ends her combo with a turning slash and four criss-cross slashes.

: Kneels for two criss-cross slashes. The spirits continue to dice her launched opponent.

): Stabs the ground which knocks her opponents upwards. She turns her back and stabs her sword into the ground again to blast them further away.

: Three turning slashes that ends with a pose. She is surrounded by a giant whirlwind as she moves forward.

: Rising diagonal slash followed by a quick horizontal cut. Farangis spins for a rising slash and then stabs forward. She straights for a short horizontal swipe and follows this with another crouching stab. She straightens for another horizontal swing and ends with a turning v-shaped slash.

: Dives with a turning slash. The spirits cover her landing and dice up nearby foes.
Dashing

: Rising diagonal slash.
Charge Shift: Kneels for a charged stab in front of her.

): Kneeling diagonal slash. While the spirits dice up enemies in front of her, Farangis sends them flying with a hopping slash.

: Leaps up and slices in front of her for three quick cuts.

: Leaps into the air for a whirling slash. This strike has the Wind element assigned to it.

): Two criss-cross slashes followed by spirits slicing up foes in front of her. She stands still for a silent prayer before she stabs forward, blowing her foes away.

Fire Weapon Art
Fire element is added to her C3, C4 and C5. 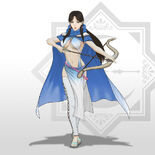 Retrieved from "https://koei.fandom.com/wiki/Farangis?oldid=433430"
Community content is available under CC-BY-SA unless otherwise noted.