Fatal Inertia (フェイタル・イナーシャ) is a futuristic racing game which combines aspects of go-kart racing with aerial warfare. Set during the mid 22nd century, the game centers on the titular racing competition sponsored by several influential mega corporations. Having become one of the world's most popular forms of entertainment, Fatal Inertia has pilots race for fame and glory using high-speed hovering vehicles provided by each of the aforementioned sponsors.

The game was designed by Michael Bond while Takazumi Tomoike served as the producer. The composers of the soundtrack were Starsky Patridge, Peter Lalonde, and Chris "Lash" Thompson.

During development, the designers originally planned to include free-roaming modes that did not always involve racing. But because of costs and time restraints, they ended up being scrapped. Among these unfinished modes were Hot Potato, a racing elimination event, and Vampire, a chasing game similar to tag. Ideas implemented by other games were also used to help create Fatal Inertia. For instance, the racecrafts' magnetic weapons were inspired by Katamari Damacy.

A retail version was released for the Xbox 360, whereas the PlayStation 3 port is a download only title. It was originally intended to be a launch title for the PlayStation 3 before technical difficulties with the Unreal Engine delayed the game's progress, causing the Xbox 360 version to be released ahead of schedule.

Every race consists of eight contestants whom compete to cross the finish line first. Racers must pass the designated checkpoint during laps while simultaneously avoiding obstacles and beating their competition. The player's speed and ranking are displayed on the lower right portion of the screen to help determine their current position in the race.

With the push of a button, racers may automatically return to their initial checkpoint in case they run off course or head the wrong direction. Another button input switches the camera angle to the rear which helps in evading enemy fire or aiming weapons from behind.

Aside from thrusting and braking, players can also double-tap the left and right triggers to perform an evasive barrel roll to repel enemy fire or shake off unwanted weapons attached to the craft.

Another maneuver is the brake boost which is triggered by holding the brake button while thrusting forward. The player's racecraft experiences a drop in speed at first, but their accelerated thrust starts at an incredible rate once the boost gauge is filled up from the move. This technique, however, should be used sparingly since constant overuse may cause the craft's engine to stall.

The game provides a range of modes for one or two players. Some of these may also unlock new content by accomplishing specific tasks or achievements.

Sets players up with a quick race through four different events or a time trial. Can be used for practice.

The heart of the game, it is a single player mode which allows players to compete in three different leagues: Exhibition (initially available), Professional, and Elite. The higher the league, the more challenging the other contestants become. Each league is comprised of several series.

There are four primary events found within this mode:

Enables online matches. Up to eight players may participate at a time.

Mode for customizing racecrafts with upgrades, new parts, and paint jobs. Parts can be changed as long as the right styling attachments are obtained. It cannot be selected until players begin Career Mode.

There are four types of racecrafts; each have their own strengths and weaknesses. While players begin with the Mercury Class, the other three can be obtained by finishing Exhibition League races. Stats are rated from A (best) to D (poor).

Players can find various upgrades during races and use them to modify a racecraft's parameters and appearance.

Created by Mercury Engineering, this light and fast craft is best known for its superior maneuvering. Often a good choice for beginning racers or for navigating complex circuits. The vehicle's overall speed is low, but its acceleration and control are top-notch. Several parts for this racecraft are named after animals, mostly birds and other winged creatures due to the craft's avian design. Its development was inspired by joint strike fighters of the 22nd century.

A craft with well-balanced parameters and a remarkable performance rating. Built by Phoenix Motors, its agility makes up for its mediocre handling and durability. Mounted on the vehicle's wings are engines that serve to enhance its already impressive speed. The Phoenix racecraft was one of the earliest models released during the beginning of Fatal Inertia.

The fastest craft available, it was manufactured by the Aurora Syndicate. However, its questionable reliability and lack of control make it suited only for the more advanced players. The exotic design of this vehicle was based on previous jet propelled models that broke terrestrial speed records during the 21st and 22nd centuries. Also, the extra large wings attached to it are built to help stabilize its handling performance. This craft was previously banned by the league for its unstable performance only to be reinstated by popular demand.

A bulky yet powerful craft constructed by Titan Industries. It compensates for its poor handling and mobility with greater offense, weapon space, and heavy-duty armor. Recommended for more experienced veterans who can handle the vehicle's awkward maneuvering. Can pick up twice the amount of slots used for magnetic weaponry.

The original game offers six unique racing environments divided into 51 separate circuits. These harsh areas are filled with numerous natural obstacles that may endanger contestants, making them the perfect grounds for the competition. Some of these tracks may also be laid with gas bombs or underwater mines.

The PlayStation 3 port of Fatal Inertia is known as Fatal Inertia EX. It features a number of adjustments and improvements as well as additional content. 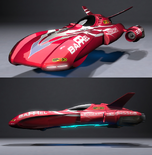 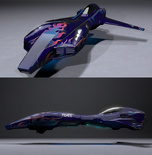 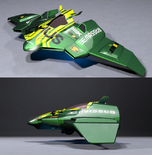 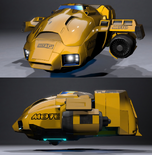 Titan class
Add a photo to this gallery

Retrieved from "https://koei.fandom.com/wiki/Fatal_Inertia?oldid=313434"
Community content is available under CC-BY-SA unless otherwise noted.