The producer said this title adds more volume to the original concept. He believes that fans will appreciate the memorable reenactments of their favorite scenes, even striving to make several characters as faithful to the original source as possible. Everything is being revised from the first title to provide a "Warriors-like experience". Since he feels that this game is an in depth re-imagining of the original which better corresponds with fans' requests, he insisted on adding the "True" (真, shin) to the front of its Japanese name rather than giving it a numerical.

The PlayStation 3 and Xbox 360 Treasure Box edition includes a visual storybook, an original soundtrack CD, a postcard calendar, a set of character stickers, and a Kenshiro shaped 4GB memory stick. Consumers who obtain the game early can obtain a downloadable code for Kenshiro's outfit during the Shura Country arc. A smartphone pouch is given to fans who reserve the title. The Legend Edition includes the game, the downloadable code, the smartphone pouch, and a special PS3 model with a matching wireless controller. People who purchase Shin Hokuto Musou from Gamecity Shopping obtain an original card set for any edition of the game. Xbox 360 users can prepay for their online pass for online content under an image of their choice: the game cover, Kenshiro, Raoh and Kaioh or Yuria, Mamiya, and Rin.

Due to budgeting issues, this game is limited to Japanese voice overs for overseas ports. America has the Xbox 360 version through retail, but the PS3 and WiiU version s is digital download via their respective networks.

A mobile version of this game is in the works.

The Legend Mode includes events from both arcs of the main series. The first story arc has more stories and characters than were featured in the previous title.

Similar to One Piece: Pirate Warriors, story cutscenes quote the comic directly and switch between panel-by-panel audio animatics or in-game cutscenes. Events have been altered to be more seamless than the original game. Quick Time Events can happen in the midst of cutscenes and boss battles. These additions strive to mimic canonical events within the comic. Penalties for failing QTEs vary on the stage; sometimes the boss will recover their health with a strength buff or the chance for a quick kill is missed and the fight resumes normally.

Like Dynasty Warriors 7, in-game cutscenes may automatically determine which character the player can use in each stage.

Similar to the first game with different scenarios for the returning cast. Players complete various scenarios within one of the following episode sub-headings:

Each character has their original story and endings. Intro and outro cutscenes follow the same type of structure as Legend Mode. They can either follow their story or play another scenario ala Free Mode.

When the player completes a specific set of missions for a stage in this mode, they can unlock it for online two player co-op. Players can also play in an online tag team mode, or form two four-man teams and compete among themselves to clear missions in a stage. Similar to Dynasty Warriors: Gundam 3, victorious online matches offer more stat items and bonuses than playing solo.

Gallery mode which keeps and catalogs earned movies and scenarios for repeated viewings.

There are twenty playable characters in the game, not including DLC. According to the producer's comments, more supporting characters have been included to properly dramatize and reenact scenes from the comic. The characters he wanted to focus on were Thouzer and Ein; Hara was enthusiastic for Falco.

Image songs
AHEAD, DEVIL SIDE by VAMPS
DESTINY STAR, Pray for you, FAR AWAY, Believe you by Nana Tanimura
TOUGH BOY, Ai wo Torimodose!! by Marty Friedman (vocals by Mike Vescera)

Koei held a press meeting to celebrate the game's completion for the media with the comic creators (Tetsuo Hara and Horie Nobuhiko), Hisashi Koinuma, and Youichi Erikawa as guests. It was a simultaneous live web broadcast at Nico Nico Live. Interested consumers could also try a trial version of the game in various Japan outlets throughout December. Residents in Japan can use the QR codes from the game's giant posters to obtain custom PlayStation themes.

4Gamer Radio reported on the game for their 142nd episode. Interested fans can view their gameplay footage for the broadcast on Niconico Video.

The first guidebook includes a PS3 only bonus for Japanese consumers which completely unlocks Kenshiro's skill chart. The same serial is also within the second guidebook, which includes data regarding characters and events in Dream Mode.

Players who purchase the February 2013 issue of Comic ZENON can obtain a serial code for a red version of Kenshiro's Shura outfit. It's a partial tie-in with the magazine's side story for Heart. Readers of this issue can enter a present campaign for a chance to win autographs of the game's voice actors, a copy of the game, or a postcard. It's a simultaneous collaboration with Weekly Famitsu.

Steak & Hamburger Ken restaurant chain will be offering a Shin Hokuto Musou themed menu for consumers. Customers who order the two featured dishes will obtain stamps depending on the amount of meat they choose to purchase for their meal. Stamps can be collected onto a card and can be exchanged for a chance to win prizes. 3,000 contestants can win a character card. Rarer prizes include a copy of the game, the Treasure Box edition of the game, or their preferred home console (PS3, Xbox 360, WiiU) and the game. The campaign ends on December 28.

Once both products are available, players of 100man-nin no Hokuto Musou can exchange serial codes and passwords between the two mediums.

*Used for the ending credits and commercials. 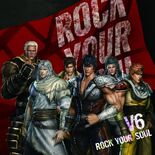 Retrieved from "https://koei.fandom.com/wiki/Fist_of_the_North_Star:_Ken%27s_Rage_2?oldid=447371"
Community content is available under CC-BY-SA unless otherwise noted.