Players who participated in Famitsu's Toukiden questionnaire answered that he was their fifth favorite character, tying with Tenko for the same spot.

Fugaku once lived in Hoozuki Village. He became a Slayer to protect his home from demons and was popular with the villagers. The village's Barrier Priestess, a young child nicknamed Chibisuke, was especially attached to him. Chibisuke gave Fugaku one half of a trinket called Twin Stones: when the matching stones are close to one another, they emit a blue glow. Treasuring his half as a sign of their friendship, Fugaku was confident to know that someone believed in him.

Three years before the main story, a winged demon and its minions attacked his home and, though he fought his hardest, he was powerless to prevent Hoozuki's destruction. Fugaku tried to search for survivors, but all he found were corpses. The last dying villager thanked him for trying to save them before passing away.

As the lone survivor of Hoozuki, Fugaku swore to hunt down the winged demon and destroy it, hoping to free the souls of Chibisuke and the other villagers who were devoured by it. He eventually arrived to Utakata Village through his wanderings and has forged a reputation of recklessly fighting demons during missions. He and Nagi were away on patrol when the protagonist first arrived so the veterans are introduced to him/her upon their return. He is skeptic of the new recruit yet gradually trusts him/her after seeing them in combat. The protagonist becomes vaguely aware of Fugaku's past when they face Hinomagatori, but it is pushed into background due to the wave of demons surrounding Utakata. Fugaku continues to act as support for solving the village's problems and gruffly tries to snap Ibuki from his self-pity.

After the sleeping disease is dispelled, the protagonist begins to hear a voice pleading for Fugaku's help and listens to its memory with Fugaku. He/She confers with Kikka, and she identifies it to be the cries of a departed soul nearby. The protagonist explains their findings to Fugaku who immediately realizes that he has found his prey. Using his Twin Stone, he leaves the village by himself to track it down and defeat it. The protagonist brings along Nagi and Ōka to provide assistance. The demon eventually falls against the four Slayers. The souls of Hoozuki are freed from its empty husk, finally able to pass into the afterlife.

Fugaku cries for them upon their return to Utakata. His vengeance and farewells to his past are done, but the Slayer swears to keep fighting for the friends he has in the present. As he thanks the protagonist for his/her help, the stronger bond leads to them sharing the Watanabe no Tsuna soul inside him. When the protagonist returns to his/her home, Chibisuke thanks them for helping Fugaku before fading away.

Toukiden Kiwami has him lash out at Reki soon after her arrival. Before Hoozuki was on the brink of destruction, it had implored other villages for aid. Shiranui was the closest to Hoozuki but had turned a blind eye to their cause. Fugaku reflects that his outburst was uncalled for and promises to not hate the newcomer. He lives up to his word by selflessly aiding the rescue effort for her and the protagonist. When his soul is being consumed by Izuchikanata, he believes he is still protecting Hoozuki. His soul is brought back to the living and he may fight in the final battle.

Once Utakata is peaceful, Fugaku considers going on another journey to fight more demons. Nagi correctly deduces that he is running away from his past fears and implores him to stay. He relents, trusting the protagonist to keep an eye on his judgment.

Rough, rude, and competitive, Fugaku seems like a barbaric warrior who loses himself in the fight. A part of him appears to enjoy slaying demons with reckless abandon, but the other is genuinely humane. While he can't deny that his greatest failure bothers him, he has long since resolved to avoid regretting his past and accept reality. He uses his personal experience to offer perceptive and empathetic advice for his comrades through a tough front. His boisterous yet kind nature is well loved by children, who flock to him as their ideal older brother figure.

Fugaku cynically picks on Hatsuho and Ibuki, condescending their smugness whenever it arises for comical relief. In the latter case, he sees through Ibuki's superficial front and disdainfully calls him a "pretty boy". During Kiwami he feels his position for the village strong man is threatened by Yamato and Souma; his requests deal with him wanting to prove himself as the greatest.

Once his affinity is at maximum level with the protagonist, he will give him/her the recipe to create a replica of his weapon. His weapon is a mighty non-elemental weapon and cheaper to create than the gauntlets' stronger weapon fusions. Higher affinity additionally increases the chances of him appearing within the village's bathing area. 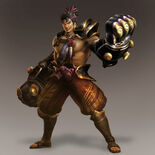 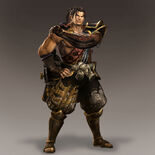 Toukiden Kiwami render
Add a photo to this gallery
Retrieved from "https://koei.fandom.com/wiki/Fugaku?oldid=215677"
Community content is available under CC-BY-SA unless otherwise noted.