Fujihide Mitsubuchi is a guardian of the shogun, Yoshiaki Ashikaga. Fujihide and his brother, Fujitaka Hosokawa. helped Yoshiaki liaise with Nobunaga's forces and once they reclaimed the capital is, plotted to reclaim the Ashikaga's power from Nobunaga's stranglehold. His scheme was discovered and Fujihide was ordered commit seppuku, with Mitsuhide Akechi supervising.

Fujihide Mitsubushi first appears in Samurai Warriors 2: Empires, serving under the Ashikaga. He remains regulated to the Empires expansions through the fourth iteration.

In the fifth installment, the playable Fujihide Mitsubushi appears as the chief retainer of Yoshiaki. After the power vacuum in the capital, he appeals the help of Yoshikage Asakura and is good friends with Mitsuhide. Eventually, at Mitsuhide's behest, he places his trust in Nobunaga to restore Yoshiaki's power and helps in the battle of Kannonji Castle and the march to Kyōto ousting the Rokkaku and Miyoshi clans in his way.

While victorious, Fujihide and Yoshiaki feared the growing Oda influence and sent secret messengers to several warlords as well as hiring the Saika mercenaries to assassinate Nobunaga. Though cornered at Kanegasaki by the Azai-Asakura army, Nobunaga successfully escapes at the cost of Nō giving her life and begins hunting the contractor of the Saika. Ultimately, Fujihide's messengers are spotted by Sandayū Momochi, and a vengeful Nobunaga immediately attacks Fujihide and Yoshiaki at Makishima.

Upon their defeat, the pair flee and attempt to find refuge elsewhere, but Magoichi catches the pair abandoning their men and binds them before fleeing. Brought before Nobunaga, Fujihide pleads for Yoshiaki's clemency, and Mitsuhide's assessment that the shōgun's death would cause more enemies to pop up stays Nobunaga's hand for Yoshiaki. No mercy is given to Fujihide, however, and he is swiftly ordered to commit suicide.

In the hypothetical scenario, he outlives his historical death and rallies other discontent factions such as the Iga ninjas of Sandayū and the Mōri to siege Hideyoshi at Yamazaki. Like Yoshiaki, he is slain by Nobunaga's forces though their deaths do little in stopping the conflict.

Mitsubushi Fujihide was born the eldest son of Mitsubushi Harukazu, and was half brother to Hosokawa Fujitaka, with both of their mothers coming from the Tokudaiji clan. As his father had been a direct vassal of Ashikaga Yoshiteru, Fujihide was also directly tied to the Shogunate clan. Mitsubushi Fujihhide's first recorded service under Yoshiteru was to receive and reject the imperial announcement (that the Shogun's rival, Miyoshi Nagayoshi forced) to change the name of the year, essentially claiming the end of an era of the Ashikaga. Fujihide continued to support his lord in his fight against the Miyoshi, even as the war began to favor the Miyoshi and Yoshiteru agreed to submit to Nagayoshi for the time being. When conflict heated up again in 1562, Fujihide was involved to some capacity, but it is uncertain if in support of Ashikaga Yoshiteru or Ise Sadataka.

Regardless of Mitubushi Fujihide's loyalties to Yoshiteru, when the 13th Shogun was slain by the Miyoshi Trio and Matsunaga Hisahide, Fujihide and his brother rushed to secure Yoshiteru's brother, Yoshiaki. Ashikaga Yoshiaki was currently serving as a monk in Kofukuji Temple. The two bothers gathered up several other loyal retainers, including Wada Koremasa, Issiki Fujinaga, and Niki Yoshimasa. Fujihide and company first moved into Omi province, before taking shelter under Asakura Yoshikage. When Akechi Mitsuhide recommended seeking help from Oda Nobunaga, as Yoshikage proved unwilling to risk the war needed to enthrone Yoshiaki, Fujihide accompanied Yoshiaki to the Oda camp in Mino.

Fujihide was eager to see his lord restored, and even made a failed attempt with his own retainers to prepare the way to the capital in 1567. When Nobunaga finally supported Yoshiaki's claim and helped him reach Kyoto, Fujihide was rewarded with control over Fushimi Castle in Yamoto province. Mitsubushi was then ordered to fight the Miyoshi at Minamiyama Castle. For his efforts, Fujihide was made governor of Yamoto, which he ruled easily thanks to long standing familial connections to the province. However, Nobunaga reduced Yoshiaki's power and the new Shogun began to plot against his former savior. Fujihide supported his lord, expecting his brother, Hosokawa Fujitaka, to join him. When Fujitaka sided with Nobunaga, Fujihide attempted to attack his brother in revenge, only to fail. After this loss, Fujihide took up a defense at Nijo Castle, alongside other loyalists like Ise Sadaoki and Takakura Nagasuke. However, within a week of the siege beginning, all but Fujihie had already surrendered. Fujihide was ready to hold out to the end until Shibata Katsuie talked him into surrendering.

After surrendering, Fujihide returned to his castle in Yamoto, only to see another defeat by the Oda at the battle of Makishima. Shortly afterwards, Yoshiaki was fully defeated and Fujihide was made to serve the Oda once more. Nobunaga ordered him to help defeat Iwanari Tomomichi at Yodo Castle. Success here did not spare Fujihide, as a year later, Nobunaga revoked his place as governor of Yamoto and was given into Mitsuhide's care, who was ordered to oversee Fujihide's seppuku. 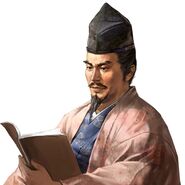