Genghis Khan (蒼き狼と白き牝鹿, Aoki Okami to Shiroki Mejika; Literally: "The Blue Wolf and The White Stag") is a turn-based historical simulation series first released by Koei in 1985 for the PC-8801. It was released internationally to North America in 1989. The namesake for the Japanese title originates from a line found in The Secret History of the Mongols: "A blue wolf born in the heavens once existed; its wife was a white stag." This excerpt is translated, albeit differently, in English for the first title.

When it was first released, the Genghis Khan titles were highly successful in Japan. The first title was an instant best seller since the game offered a similar yet different system than the Nobunaga's Ambition or Romance of the Three Kingdoms series. During the series's run, it was unofficially dubbed as one of the big three historical simulation series in the market. However, sales for the fourth title were significantly lower than the other two series. This is a likely contributor for discontinuing further entries.

The iconic main theme heard in the opening credits for the series was composed by Yoko Kanno.

These series of historical simulations are set in the 12th~15th century. Throughout the series, there are two main scenarios: the Mongolian Scenario or the World Scenario. The first title has the World Scenario split into individual "Asia" or "Europe" routes.

Choosing the first setting allows players to reenact the history of a young Temujin as he matures to become Genghis Khan. The map will be centered in Mongolia, as he faces against different factions in the region. Players maintain their orda structured society, keeping the villagers content whilst expanding their territory.

The World Scenario lets players choose to control a political leader found throughout Eurasia. Initially, the countries are limited to Mongolia, the Byzantine Empire, England, and Japan. By the fourth title, however, a total of 27 different options are available. Hungary, Korea, and Poland are a few examples included in the bunch. The goal of this mode is to conquer the entire known world with the player's chosen faction.

A gameplay trait unique to this series is the importance of family relations and kin. Family members will not betray one another and will retain their loyalty. If the player's character happens to die in battle or due to old age, their heir must be a male member of their family. Should the player's character only have a daughter with no brothers or uncles, then her male child will be designated as the next successor. No viable offspring means an instant game over. This system enforces the importance of marriage within the simulation, which is an optional aspect in the other historical simulations. Players may choose to bypass the necessity of siring an heir by completely conquering the land within their character's lifetime. However, this can be a difficult and risky affair.

Another defining feature is the development system. In the Nobunaga's Ambition or Romance of the Three Kingdoms series, players can increase the supply by building multiple fortifications. Genghis Khan discards this aspect to instead focus on a tribal lifestyle. The player's goal for raising necessities is to help the villagers thrive in prosperity with generous offerings of gold or easy taxes. Food, gold, and villagers will automatically increase based on their satisfaction with the player's decisions. Keeping several provinces happy might help prevent revolts against the player's reign.

Villagers also act as the soldiers for the player's army. The more prosperous the village, the larger an army the player can command. Wars are a trickier gamble since the lost of a soldier may also mean losing a villager and may even trickle further down the line to harm the village's economy. To prevent the loss of too many soldiers, both villagers and leaders can improve their skills by training together. Leaders may choose to hone their talents on a desired stat, such as Intelligence or War.

After you've successfully finished Scenario 1, you proceed to World Conquest. It depends on what date you finished, country, and ruler.

The musical composer for these songs is Yoko Kanno. 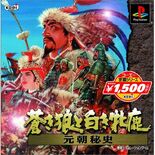