Gyūki (lit. Ox Oni/Demons) are supernatural monsters found in legends and myths throughout Japan. Their forms and details of their habitats vary, but their consistent traits includes their poisonous breath and their hunger for human flesh. They lurk in deep water brooks to prey on bystanders or unwitting travelers. Koei titles prefer to follow the Heian period interpretation of their stature as imposing oxen demons.

Copies of him and Dodomeki in the Warriors Orochi series serve as members within the Orochi forces. To unlock him in his debut, the player must collect 25 treasures. They were only playable in the Versus and Survival modes for their debut with incomplete movesets. Musou OROCHI Z allowed them to be playable in every mode with complete movesets. Gyūki can be unlocked as a playable character in Warriors Orochi 3 by viewing at least one ending.

Within the Harukanaru Toki no Naka de series, Gyūki are called Ushi-oni and are a common vengeful spirit for most of the games.

Not much of Gyūki's personality is explored outside of battle in the first few games. He is shown being brutish, cruel and spiteful towards his enemies while fighting. In the third installment of the series though, while he does try to come off as tough to his new human allies, once having joined the coalition, it is shown he is actually one who is easily excitable and a tad hyper. In the Japanese script of the game when speaking he uses female pronouns and adjectives adding a slight air of innocence to his character.

Gyūki shares an unexpected bond with Rachel. In Ultimate, he develops a friendship with Hundun as well.

His fourth weapon is named after the place where departed souls live, Yomi-no-kuni. The place of the dead is known to have dead spirits and various monstrosities lying in wait. The second part of his weapon's name is a different name for Ama-no-Murakumo-no-Tsurugi, Tsumugari-no-Tachi. It implies he wields the underworld's version of the divine blade, making a weapon capable of fearsome destruction.

"No, this is my smaller club, actually."

"How about you stop groveling like a pig for once?"

"Ha! To bring it to destruction!"
"That's really not a long-term vision, though. You have no imagination - just like the fiends from my world."

"Hrah! I'm surprised at you, Lord Hundun! I'm none of those things! I'm a full-fledged demon! I am no mere animal!"

"I know elephants! They're those big, clumsy, slow-moving things! I'm faster than them!"
"They're a lot more nimble than they look, y'know! They can run a lot faster than you or me!"
"Is that right...? Well, I bet they can't fight! They're too mild-mannered, right?"
"Normally they are, but a single command from me, and they'll wipe out any enemy. They're my most powerful allies!"
"Yeah, but if I rode one, I bet they’d just be freaked out... You know, because I look too much like them..."
"Huh, is that what you're worried about? When I get the chance, I'll teach you how to ride an elephant properly."
"R-Really?! You promise? I'm really looking forward to that!"

: A grab. If his fist connects, he slams his opponent on the ground twice before chucking them over his shoulder.

: Mighty overhead smash using both of his hands on the club.

: Smashes his club's top onto the ground in front of him, emitting a fan of energy forward.

: Swing to left, swing to the right, and a swing with both hands on the club that rises upwards. Follows with a double handed swing down and a thrust. Ends with a mighty swing that spins him around twice.

: Spins with his arms out. In his true musou version, he ends it by smashing the ground thrice.

: Lowers his horned head as he charges forward. Rises and shouts, emitting a fiery explosion.

: Plummets to smash the ground with his legs.

, R1 (Ultimate only): Tosses weapon on the ground to produce a giant fissure.

: horse rears its legs and smashes the ground with its front hoofs.

: Series of swings to his right.

after any first four normal attacks: Pounds the ground with his club's top.

: Swings his club once as his horse stampedes forward while surrounded by a destructive energy.

His moveset is slow, and mostly focuses on shockwaves. To compensate for its lack of speed, Gyūki has high defense which can withstand weak attacks that may interrupt its swings. 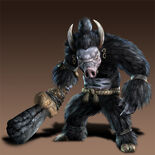 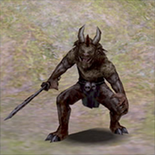