The Hōjō clan or the Late Hōjō clan (後北条氏, Go-Hōjōshi) was a large clan that traces its lineage back to the 16th century. One of their distant relatives includes the Fukushima family. The Samurai Warriors series distinguishes them with the color black.

The clan's founder was Ise Shinkurō (posthumously Hojo Sōun) who claimed the clan's foundations from the rest of the Ise clan. His son established the Hojo name and gained influence with the Kamakura shogunate through political marriage. Their fortune and political power quickly earned them allies and made them targets of many would-be conquerors. At their prime, they had seventeen clans serving them and 476 vassals at their disposal.

Their main code of arms is based on a tale found in the Taiheiki. When Benzaiten of Enoshima was praying for the prosperity of her descendants, the beautiful woman's prayers were answered by the arrival of a large snake. The serpent left three of its scales and disappeared. It is said that Benzaiten was pleased with her gift and took the scales.

Hōjō's Colored Banner Commanders (北条五色備, Hōjō Goshokubi) were five officers Ujiyasu appointed to command the different province forces under control of the Hōjō. He marked each of them with a different colored banner.

Six clans who supported the Hōjō from the beginning with Sōun. They numbered among his first retainers. An old legend claims Sōun and six other men, each representing one of the clans, made an oath over a fountain to become the other's vassals should any of them become a Daimyo.

*Old Records of the Odawara adds the Matsuda as a seventh clan, changing the name to Goyuishoke 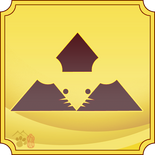