Hades (ハデス, ᾍδης) is a mythological god of the underworld and the brother of Zeus.

In the main storyline, Hades remained within the Underworld when Odin was first killed during Ragnarok. Hoping to use Odin to gain Yggdrasil's power, Hades allowed the god to return back to the world of the living. As Odin leaves, Hades proceeds to implant the seed of Yggdrasil into Odin's soul under the guise to make Odin's next death more interesting.

Hades later covers the escape and states that it was due to Odin's persuasion that Hades was tricked into releasing the renegade god from the Underworld, allowing him to unleash his plans for Ragnarok. Hades arrives far late into the story, reinforcing his brother's army from Odin's army of illusions and horrors at Changshan. Although surprised to see Gaia, albeit in her spirit form, Hades opts to aid the Coalition's efforts, feeling somewhat guilty for being "tricked".

As the ruler of the Underworld, Hades acts as the Coalition's locator for Odin's soul, which is the key to stopping him. Hades is eventually able to track the soul near Yggdrasil, but is unable to find it's specific location. He aids his brother in breaking through the front of Yggdrasil at Chencang-Ueda, where he accompanies Huang Gai's unit. Their success not only clears the path towards Odin, but the power siphoned from Yggdrasil allows Gaia to create a new body for herself. In the final battle near the Spring of Mimir, Hades is able finally pinpoint the location of Odin's soul, near the Spring itself. Although he claims Odin's soul with the help of the Coalition, the loss of Odin causes Yggdrasil to collapse without its power source. Like the other gods, Hades sends the humans away to spare them from the destruction. Despite seemingly finishing the fight against Odin, a voice calls out, claiming that the true crisis has yet to be averted.

In the alternate scenario, where the real Perseus is resurrected prior to final battle, Perseus reveals to the Coalition that Hades was the true mastermind of the events thus far, having actually been the one manipulating Odin from the start in a bid to claim Yggdrasil's power for himself. By the time the Coalition is able to reach Odin, Hades has already reclaimed his former prisoner's soul and takes Yggdrasil's power for himself.

Using his newfound powers, Hades links the world with his underworld in order to bring his armies to fight the Coalition. He first chases them out of Yggdrasil, as well as displaying Odin's powers to create illusions of the Coalition's heroes to do his bidding. With his power exceeding all expectations, Hades soon becomes an unstoppable force, and he chases the mystics and gods of the Coalition to Changshan, where they make a desperate bid to travel back in time and rescue Odin.

As with the previous timeline, Hades still ambushes Odin at the Spring of Mimir, but the Coalition is able to reach the pair in time and rescue Odin. Because of this new intervention, Hades is unable to slay Odin. Nonetheless, he is still able to absorb Yggdrasil's power. To counter this, however, the Coalition entered the underwold during its ruler's absence to gain Bident, which has the ability to free Odin's soul from Yggdrasil and strip it of its power source. Taunting Zeus and the other members of the Coalition once again, Hades challenges his brother to face him once again at Yggdrasil.

In the final battle, Hades begins using his powers to create more powerful illusions of the mystics and the gods to oppose the Coalition, but the Coalition is able to use Bident to separate Odin from Yggdrasil. Despite this setback, Hades continues to absorb as much remaining power in the tree in a desperate bid to defy his brother, leading the Coalition to his castle behind the Spring of Mimir. Although he is able to power himself further and summon illusions of Gaia to aid him, the Coalition seizes the altars strengthening him and cut down his illusions. When he is defeated, he returns to the Spring, where Odin, Zeus and Gaia begin sensing his growing instability as he attempts to absorb more power than he can control. Hades then summons illusions of Orochi and Orochi X for protection, but the Coalition is able to defeat both.

Eventually, Hades loses control before he is finally defeated once more by Zeus and Gaia. Zeus then chides his brother that the difference between them was that Hades never accepted things he couldn't do alone, and did not have companions to aid him. Despite their conflict, Zeus offers to repair his relationship with his brother, and a touched Hades decides to return to his domain in the underworld on his own.

The reformed Hades returns to aid his family in having a final battle against the humans as a parting gift when they return to their respective worlds.

Despite his intimidating appearance, Hades is quite affable towards gods and humans alike. Unlike many of the other divine beings, Hades is interested in humanity's worth and often enjoys seeing the creativity of humans in the actual field. He often teases Gaia by calling her "grandma" despite her insistence to not be called as such, especially with her youthful body.

In reality, however, he is a brooding and jealous god, dissatisfied with the glory Zeus has achieved while he is stuck with the Underworld. He eventually schemes against his brother to seize the title of being a god among gods. As he begins to struggle, his loss of control only amplifies his obsession with surpassing his brother.

Hades' weapon, the Scythe, is symbolic to the Western idea of death. Despite this, Hades is not the Greek god of death, but God of the Underworld, where the dead will go and be bound under his rule.

Hades is the Greek god of The Dead, The Underworld and of riches. Despite the connotations of death being evil by nature, Hades is more magnanimous and altruistic in depictions of Greek Mythology, depicted as a stern and fair ruler of the underworld, but also cold and uninterested with the happenings of other realms. There is also a common misconception about Hades being associated with death, as he is Lord of the Underworld where he ruled over the dead; However, Hades is not actually the Greek god of death, as there is a personification of death called Thanatos, which can be considered as the god of death.

Hades was the third child of the Titan Kronos or Cronus by his sister-wife Rhea, and he was the first-born son of Kronos. Kronos, in fear of a prophecy that he will be overthrown by his children, would eat each of his children to ensure the prophecy would not come to pass. Hades, alongside his elder siblings Hestia, Demeter and Hera and his younger brother Poseidon were consumed by Kronos. Hades' youngest brother Zeus did not receive this fate and would rescue his siblings by forcing Kronos to throw up his consumed children. This led to the Titanomachy or the Battle of the Gods, where Zeus and his siblings would fight against the Titans for ten years. In the end, the Titans were defeated and the gods of Olympus would divide the universe: Hades was given the underworld to rule over, although there are myths that suggest he was displeased with the outcome. Like Zeus' Lightning and Poseidon's Trident, Hades would receive a helm forged by the Cyclopses and would give him the ability to become invisible. The god Hermes was known to have borrowed Hades' helm on several occasions.

One of the more established tales of Hades is his relationship with his wife and niece, Persephone. It was stated that Hades had pulled her into the Underworld while her mother, Demeter, was distracted, and later successfully wooed his niece. When Demeter's grief caused plant life to wither completely, Persephone was allowed to leave the underworld during the winter season as she had eaten some pomegranate seeds during her stay. Hades notably imprisoned and punished Theseus and Pirithous for attempting to abduct his wife. He also has a minor role during Heracles' labors, where the demi-god asked for his uncle's permission to tame the Cerberus. 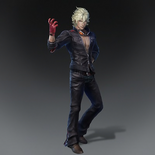 This article is about a game that has not been released yet. Information may change rapidly.