The Han Dynasty (漢朝), known as the Eastern Han Dynasty (東漢朝) prior to the Three Kingdoms era, was the governing body of China that followed the Qin and Xin Dynasty. Ruled by the Liu bloodline, their reign lasted over four centuries and is commonly considered within China to be one of the greatest periods in the history of China. To this day, the ethnic majority of China still refer to themselves as the "Han people". A combination of corruption, pestilence, sectionalism, and rebellion caused the eventual downfall of the entire dynasty. In the games, most characters serve the Han under the control of He Jin at the very beginning in the fight against the Yellow Turbans.

This list only includes the designated rulers for the Eastern Han. It does not list leaders from the ancestral family line, Western Han, or Shu Han. 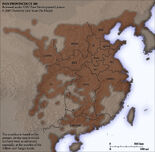