The Japanese romanization is being used for this wiki because the games themselves have remained unlocalized in English.

Officially abbreviated as Haruka (遙か), it is the second entry in the Neoromance series. Characters are designed and illustrated by Tohko Mizuno.

Various Ruby Party developers will reply that the series began as an attempt to satisfy pleas received from fan surveys. A majority of the responses asked for a title with role-playing game elements and a new cast of characters. As such, each Harukanaru Toki no Naka de installment changes their cast to offer a different setting, story and tone than the previous title. Random battles and a loose leveling system is included as a part of the game's narrative, granting players an easy-to-play RPG experience. While the dictated simulation aspects were kept in the first two installments, later entries allow the player to freely roam each area before they choose to proceed with the game's main story. The adventure-like game flow has remained a prominent aspect to separate itself from other Neoromance entries.

Ayako Tsukaguchi, a Ruby Party developer, noted that the development team wanted to create individual narratives for the characters to contrast Angelique (which have the protagonists mainly interact with one another to create romantic ties or friendships). Choosing to focus on a single character would change the entire story structure to focus on them, omitting or altering events that would normally occur. Stories remain romantic, but the staff wanted to add "a feeling of loss and tragedy" for each character. The main protagonist follows the proactive concept of consoling and encouraging a character, helping them solve their individual problems for their endings. These protagonists may not always speak with an audible voice, but their selective text responses are quite vocal compared to other Neoromance titles.

Though characters and the era may change, there are some crucial elements that remain within each entry. Each game takes place in a parallel world, mainly focusing on a land that behaves like Japan. Two dragon gods have constructed this world, keeping equilibrium by gently watching over its inhabitants. One dragon is known as the White Dragon, the embodiment of yang and ruler of the five elements. Its opposite, or its yin counterpart, is the Black Dragon who is gifted with the power to grant respite to the world. When both dragons combine their strengths, they are known as Yinglong, a guardian of the world's capital. Those within the dragons' blessings are granted a life of unmistakable serenity.

Dragon gods choose to watch the world from afar, unwilling and incapable of dwelling too deeply into human affairs. If humanity disturbs the peaceful balance, the five elements will be led astray and hazardous irregularities will appear within the world. These distortions may corrupt various residing deities and spirits, transforming them into vengeful spirits (怨霊, onryou). People may also cast curses on one another and defile their spirits. These defilements may cause pestilence, famine and despair. Leaving them unattended for long periods of time may kill those afflicted.

To restore order, each dragon god will endow their powers to a young girl. These dragons only choose those who they find worthy of their trust and may test their inheritor's willpower. Should they not find a girl within their world, the dragon god may be capable of traveling through time to find her. Once she is located, they don her their priestess and form an instinctive bond with them. If the girl wishes and prays strongly, the gods will answer her. Because of her powers, each dragon priestess is seen as an honorable living treasure in the parallel world.

The main protagonists in the series —except for the sixth entry— each act as their era's White Dragon Priestess. She possesses the power to purify and seal vengeful spirits and defilements. Additionally, she has the innate ability to control the five elements by personally exploring the parallel world. Since the White Dragon Priestess is a magnet for attracting malevolent spirits, the White Dragon has his four servants act as her aides. Eight men are entrusted with the powers of these four deities, personifying both the Heavenly and Earthly aspects for each god. They are named after the eight symbols and are called the Eight Guardians. Once they build a trusting bond with one another, the priestess and guardians can unleash their true powers to defeat their adversaries.

Like the series's name suggests, each installment is set in a different time era.

Harukanaru Toki no Naka de has several live events, publications, and drama CDs for the franchise. A fan mook series, Haruka Tsushin, was made to cover characters who appear in the first three games.

The comic incarnation of the first game was created by the series's character designer and was published in Lala, concluding in seventeen volumes and into English by Viz Media as a part of their Shojo Beat lineup. Short stories for the other installments are included in select comic volumes in Japan. Illustrated art books of the comic have been published. The fifth installment is being sporadically printed in LaLa DX; two volumes have been compiled for this work. Her illustrations for the games and comics up to 2014 have been compiled into a recent illustration book.

A parody DVD was made for the series. Characters found throughout the games interact with one another in "what-if?" scenarios. The latest series's live event is a collaboration with Hotel Takeshina. Series regulars Kazuhiko Inoue and Souchiro Hoshi act as the hosts to fans who reserve for the dinner talk show.

Karaoke no Tetsujin hosted a collaboration for the five main installments in their private rooms. 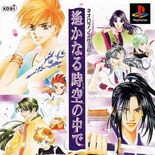