Players who participated in Famitsu's Toukiden questionnaire ranked her as their fourth favorite character.

Hatsuho was born and raised in Utakata Village. She is Yamato's childhood friend, and she acted like an older sister to him. One day, she wandered away from her home to find work at Hoozuki Village. She became lost within a dimensional void created by demons.

While lost in the demonic distortion, she meets the Quiz Battle Toukiden protagonist. Hatsuho recommends for him/her to stay at Utakata Village and agrees to work with him/her to find it. The protagonist defeats demons to clear the mist blocking their path while Hatsuho chats about herself. Lady Akatsuki worries for their companion. Hatsuho is ignorant of the "Awakening" and Hoozuki's destruction, suspecting that she may have been trapped for many years. A mist separates them and Hatsuho tells her friend to give her best wishes to Yamato.

She eventually found her way back home. Her little side trip through space-time, however, took forty years to complete. Hatsuho hadn't aged a day, yet Yamato had grown to be an older man in her absence. He explained the truth to her and revealed that her family had been killed by demons. Though shocked by the news, Hatsuho resolved to become a Slayer to protect the remains of her home. She reunites with the Quiz Battle protagonist at Utakata and recommends that he/she become a Slayer.

She started official duty about two years before the first game's protagonist. At first, Hatsuho tries to act superior to him/her, but her inexperience is too conspicuous for her to hide. She gets restless with being given meager assignments and drags the protagonist with her to hunt for larger prey, accidentally provoking a Mifuchi's awakening and endangering the entire village. Hatsuho wants to take responsibility for her fault and pleads Yamato to let her slay it. He is hesitant to comply until the protagonist stands up for her. The duo are entrusted to deal with the threat together. Grateful for their trust, Hatsuho later reveals her past to him/her in private.

She continues to help protect the village throughout the story. At the start of chapter 4, she learns that residents are mysteriously suffering from an ancient sleeping disease. Victims sleep endlessly as though they were possessed. After investigating with the protagonist, Hatusho learns that only those who deeply miss their departed loved ones are affected. She inexplicably feels nostalgic for her deceased parents, and, against her own inhibitions, falls victim to it as well. Yamato explains her past to the other Slayers, which invigorates them to locate and find a cure. Ōka and company slay the demon responsible, yet Hatsuho refuses to awaken with the other victims.

The protagonist explains their plight to the divine tree growing near their home. It offers to send the protagonist's spirit to Hatsuho, cautioning that it may endanger him/her in the process. He/She agrees and are teleported to Hatsuho's dream world in the form of a firefly. Inspired by his/her light, Hatsuho gains the courage to return to the living. Her return raises the camp's spirits. Realizing that she treasures the present as much as the past, Hatsuho says goodbye to her longing and guilt over her parents' deaths. Her stronger bond with him/her unlocks the ability to share the Urashima Taro soul within her.

During Kiwami's action trial, Hatsuho introduces the new recruit to his/her new profession with smug superiority. She dubs herself the representative commander until Yamato returns. When the truth is revealed, she apologizes for her earlier rudeness to him/her yet has faith they will get along in their duties. During the main narrative, she plays second fiddle to the main objectives within the story. She sympathizes with Kyokai after her true past is revealed.

When her soul is being consumed by Izuchikanata, she is deluded into believing that she is living with her family. She wants to find a younger Yamato and punish him for using her as a scapegoat. Her soul recovers and she may join the fight to slay the demon. After its demise, she shamefully hides her act of eating Reki's sweets. Mio and Miyu watch her when she comes clean to her friend, authoring a story that Hatsuho is a sweets thief.

Plucky and self-confident, Hatsuho is boastful and competitive. She hates to lose or be belittled for her immaturity, insisting that she is the "older sister" for everyone. Despite her sarcastic wisecracks and pouting, Hatsuho staunchly believes in her comrades and duties. Her social practices from her carefree childhood are a vast contrast to those around her, which culturally alienates her from the younger members of the party. She fights to someday see her peaceful past be made a reality.

Kiwami has her bond with Reki. Hatsuho relishes the formal respect her comrade gives her as a senior in their profession, enjoying the abnormal recognition. Her confidence falters when Reki sounds more mature than her. She often makes quips about Kuyou's stubbornness and his attempts to hide his good will. Her requests in this game revolves her wanting to become an adult by sampling odd cosmetics and bogus home remedies.

Once her affinity is at maximum level with the protagonist, she will give him/her the recipe to create a replica of her weapon. Her weapon is the strongest kusarigama he/she can use. Higher affinity additionally increases the chances of her appearing within the village's bathing area. 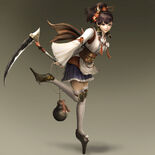 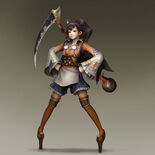 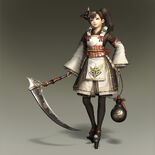 Toukiden 2 render
Add a photo to this gallery
Retrieved from "https://koei.fandom.com/wiki/Hatsuho?oldid=424946"
Community content is available under CC-BY-SA unless otherwise noted.