Players who participated in Famitsu's Toukiden questionnaire ranked him as their third favorite character.

Hayatori was born into a ninja clan and pruned since childhood to be one of its assassins. He was raised to accept and complete missions with unthinking precision. One day, he and his comrades were given an order. Hayatori tracked down their target and was baffled to discover that it was a young girl. Seeing that the girl was harmless, he couldn't bring himself to do it and reluctantly killed his comrades to protect her. He was branded as a rogue and hunted by his former clansmen.

Hayatori was a wandering misfit until Yamato found him and sheltered him at Utakata Village. He is one of the Slayers in the village to have experience fighting in the "Awakening".

The former shinobi works as a Slayer to repay the act of kindness. He sneaks away on solo reconnaissance missions for the village chief throughout the story, usually running towards the heart of danger. The protagonist first meets him when Hatsuho and Fugaku drag him/her to hunt down a large demon. By the time they arrive, Hayatori has exterminated it by himself. Yamato properly introduces him as his old friend to the protagonist upon their return to base. He critiques his/her performance in their home before leaving them.

Utakata Village is saved from a large demonic horde, but the distortion created in its wake has yet to disappear. Hayatori investigates and reports that the demons appear to be constructing a tower, which Shūsui elaborates is the sign of another "Awakening". The great war reminds Shūsui of the young Slayer's past, and he suspects that Hayatori is still haunted by it. After Hayatori confesses his past to him/her, the protagonist insists that the shinobi is not alone anymore and asks him to stop blaming himself.

Soon afterwards, Hayatori suddenly disappears from the village and hasn't returned for some time. Shūsui cynically offers that he could have gone rogue, yet the other Slayers are mainly worried that he could be in danger. As the protagonist brings Nagi and Ibuki to pursue his last known whereabouts, Hayatori is there waiting for them. He kneels before the protagonist to request for their unconditional trust, a plea which is accepted as soon as it's spoken. Gaining the courage to believe in others again, the group work together to slay Kunatosae and free Toshizo Hijikata's soul for the protagonist. Hayatori is pleased to have been useful to him/her and lets go of his past regrets. His stronger bond with him/her unlocks the ability to share the Jiraiya soul within him.

Since there are no Tenko in Kiwami's action trial, Hayatori waits for it to return to the new recruit's hut in vain. During the main narrative, his adoration for Tenko is stressed in nearly every cutscene he is present. He immediately bonds with Horō once she demonstrates her fluency in the Tenko language. When his soul is being consumed by Izuchikanata, he is deluded into believing that he is still a junior shinobi at his old village. He believes the protagonist is on the same rank as him. His soul is recovered and he may fight in the final battle.

Utakata is peaceful so Hayatori eagerly wishes to learn the Tenko language. Mio and Miyu publish their encounter with him, noting that he ignored them; Hayatori reads it and becomes self-conscious of his Tenko obsession.

To most, Hayatori is seen as the stoic loner. He only talks to others for missions and is driven to succeed them at all costs. While his professional skills are never doubted, his quiet presence detracts people from getting close to him. His distant personality is partly due to his upbringing and partly because of his anxieties caused by killing his past comrades. For years, he has wondered if he had been right to betray his comrades' trust so whimsically. He fears he is unworthy of comradeship until the protagonist convinces him otherwise.

Despite his serious composure, Hayatori has a fondness for Tenko and gushes over them with open admiration. He is flustered if someone mentions his softness for them, denying that he has any sort of weakness. He envies the protagonist for having one as a pet and pesters Tatara to make him a Tenko trinket.

Once his affinity is at maximum level with the protagonist, he will give him/her the recipe to create a replica of his weapon. His weapon offers the highest critical attack rating of the twin blades. Higher affinity additionally increases the chances of him appearing within the village's bathing area. 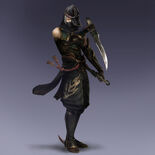 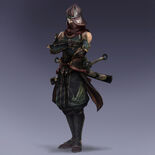 Toukiden Kiwami render
Add a photo to this gallery
Retrieved from "https://koei.fandom.com/wiki/Hayatori?oldid=269449"
Community content is available under CC-BY-SA unless otherwise noted.