Healix (ホミロン, Homiron) is a secondary non-playable character in Dragon Quest Heroes and the mascot character for the series. He acts as the representative voice for the game's official Twitter account.

Healix is a sapient jelly slime who follows the protagonists.

Dragon Quest Heroes II introduces another Healix who stays at Orenka and befriends Razel during his training days.

Kugimiya was surprised to have been chosen for anything Dragon Quest related. She especially celebrated her role since she adores Yangus and Healix has several scenes with him. Her goal was to act with a natural boyish charm that would be warm and familiar to audiences.

The developers informed Kugimiya that she would be playing "a Healix from another world" so she was initially worried about the change. She commented that even with the changes, many of her character's charms remain for the new setting.

He is a cowardly slime who tries his best. He is proud of his crown.

The second game's Healix became a fan of military instructors and enjoys mimicking them. He befriends Gabo. 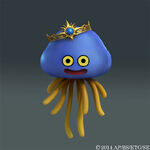 Dragon Quest Heroes render
Add a photo to this gallery

Retrieved from "https://koei.fandom.com/wiki/Healix?oldid=433491"
Community content is available under CC-BY-SA unless otherwise noted.