Homura is a former wandering bandit who reluctantly became a Slayer after being bested by Benizuki. Despite his lack of formal training, he is a natural expert of his weapon. 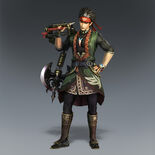 CG render
Add a photo to this gallery
Retrieved from "https://koei.fandom.com/wiki/Homura?oldid=308712"
Community content is available under CC-BY-SA unless otherwise noted.