Honoka (ほのか) is a character from the Dead or Alive series who debuted in Dead or Alive 5 Last Round. Honoka has been pampered by her grandmother all her life. She has an extreme interest in fighting, and the innate ability to remember and perfectly replicate any fighting technique that she has seen once. Presumably against her grandmother's wishes, she enters the fighting ring to enjoy her secret talent.

Nonaka was careful to make the exposition for other continuities sound as interesting as possible. She hopes everyone enjoys the dream game.

: Honoka prepares her right fist and runs forward and swings to the left.

: Honoka does an uppercut punch to launch enemies up.

: Honoka hops forward and thrusts her chest into enemies.

: Honoka turns around and launches her rear end at enemies by leaping at them.

: Honoka uppercut the enemies into the air, then grabs a single enemy in the air and body slams them into the ground with a forceful shockwave.

: Honoka winds up her right fist and unleashes a powerful punch forward with fire properties.
Dashing +

: Honoka does a flying side kick.
Dashing +

: Honoka does a flying side kick.
Jump +

: Honoka flips in the air and does a belly flop onto the ground, which creates shockwaves.
Jump +

: Honoka does a stamp kick with both feet and falls down to the ground.

: Honoka winds up right arm and punches forward, then does a shuffle kick to pop enemies up. She then winds up her right arm and does a final punch that blows enemies away. 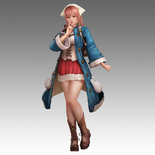