Horō hails from a technologically advanced civilization foreign to Nakatsu Kuni. Her world was peaceful until Izuchikanata descended upon it. The scientists in her realm either created or modified her body with the power to devour human souls. They believe that using the demon's powers against it would have been enough to deal the fatal blow. Horō hesitated to use this power due to her compassion for humanity, leading to Izuchikanata destroying her home. She pursued it through its portal, emerging in Nakatsu Kuni one thousand years before the main setting.

Sticking to her main mission, Horō realized her power alone would not be enough to defeat Izuchikanata. She therefore sought comrades to help her and befriended Obito and Chitose. The trio formed the "Slayer" organization to fight against the demons of the era. When the climatic battle with her target took place, Horō considered using her trump card but decided against it. She and her friends were overwhelmed, failing to slay Izuchikanata. Horō again pursued it.

Her hunt for the demon has spanned one thousand years. She has been to every era pictured within the game (Heian period, Warring States, Edo period, etc.) but, due to Izuchikanata's powerful miasma, there are none who can remember her or the demon's presence. With her every failure humanity is wiped out and the era of history joins the mesh-mash of worlds within the demon dimension, fragments of which are collected within Nakatsu Kuni. A few people have recorded Horō but not by name, dubbing her the "Jade Eyed Wanderer". Her foreign hair and eye color are her distinguishing traits within these records.

At the start of the main narrative, Horō has fallen into a ditch and has lost her memory. She wanders into Utakata Village to gain information, immediately identifying the protagonist and the other residents her friends. Horō only remembers her name and how to fight. She spends a great deal of the story amnesic and questioning her purpose for fighting, content to fight for her love for good food. Her major contribution before her memories are restored is searching the Chaos caverns to retrieve Reki and the protagonist.

Once Kyokai is cornered, Horō fully regains her memories. She elaborates her ordeal to Utakata residents, imploring that they find Izuchikanata at once. The Slayers try their hardest to search for it but fail to find it in time, resulting in the gradual decay of their mortal souls. Horō thinks their only option to end the millennial conflict is for her to devour the souls of Utakata. The protagonist tries to dissuade her before falling victim to Izuchikanata's miasma.

As Horō initiates the operation to consume human souls, her own tears stops her. She resolves that she doesn't have the heart to kill her friends, swearing to hunt the demon for all eternity if she must. Horō warmly wishes for the protagonist to remember her. This triggers her act of soul sharing and Obito restores the protagonist's memories. Using a time shard, Horō and the protagonist fight together to reclaim the souls/memories of their friends. They stand united in the final fight against Izuchikanata.

Since her mission is accomplished, Horō decides to stay at Utakata and live her days with Chitose.

Even though her character doesn't emote much, Terui hopes she properly captured Horō's outlandish and kindness in her reprisal for Warriors All-Stars. She made friends during her recording sessions and enjoyed herself immensely.

Listless and lacking common etiquette, Horō surprises people with her bizarre behavior. She initially identifies procedures and locations as systematic diagnostics before adopting formal speech patterns familiar to the era. Utakata residents best know her for her eccentric wanderings and gluttony, always seeking to enjoy local cuisine. Since she can fluently speak the Tenko language, Hayatori latches onto her as his honored mentor.

Once she regains her memories, she prioritizes the hunt for Izuchikanata. Her past experiences with Obito and Chitose empower her to never again let it escape her. When Obito resides within the protagonist she believes the purpose of her journey was to reunite them, happy to know that all the lives lost until that point were not in vain. She gains assertiveness and is protective of her friend's safety.

Normal Attack: Shoots three narrow shots in a row, reloading after each string of hits.
Charge Attack 1: Hurls a grenade on the ground. The Blast version has Horō fire at the grenade, magnifying the resulting explosion's scattering effect.
Charge Attack 2: Kneels down to fire a quick and powerful blast before rolling back. The Blast version launches a more fierce projectile.
Musou - Destroyer (鬼千切): Releases a blue fiery blast at close-range, triggering an explosion damaging those within its radius.

: Horō throws a single grenade out and shoots at it to cause a purple stun explosion.

: Horō throws three grenades into the air, then shoots a salvo at each of them at a time, causing them to trigger a large explosion.

: Horō tosses a single grenade out and shoots at it, which causes a giant purple aura to appear and stun enemies.

: She tosses out 3 grenades in front of her and shoots them all in one shot, causing them all to explode, which makes her tumble backwards a little.

: Horō throws 2 grenades upward into the sky and shoots them to release fireworks to rain down around the battlefield.

: Horō throws out several grenades far out in front of her, shoots at them to detonate them, creating fireworks.
Dashing +

: Horo swings the butt of her rifle upwards.
Dashing +

: Horo swings the butt of her rifle upwards.
Jump +

: Horō throws a grenade to the ground and shoots at it to make it explode.
Jump +

: Horō shoots out a volley of bullets to the ground.

: Horo readies her rifle and shoots forward a large blue laser beam that lasts for 3 seconds. 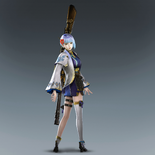 Bath outfit
Add a photo to this gallery

Retrieved from "https://koei.fandom.com/wiki/Hor%C5%8D?oldid=431832"
Community content is available under CC-BY-SA unless otherwise noted.