watch 03:41
Wiki Targeted (Games)
Do you like this video?
Play Sound

Huaman (onyomi: Kaman) is a fictional character who originated in Zong Feng Jin, a theatrical opera of Shu's fictional conquest of Nanman. She is Meng Huo and Zhurong's daughter and the main heroine of the play. Portrayed as a courageous woman like her mother, she joined her father's struggle against Zhuge Liang's forces.

After dueling Guan Suo, she became his prisoner only to be released by him out of respect for her martial prowess. Likewise, Huaman felt an attachment towards her captor and treated him well when the Nanman captured him. The two warriors began an affair in spite of their allegiances and repeated duels with one another, their romance moving Meng Huo to finally surrender during the play's climax. Zhuge Liang consented to the lovers' marriage which cemented the alliance between Shu and Nanman.

Huaman debuts as a fictional only Romance of the Three Kingdoms character in the series's eleventh title, often appearing with her Nanman kinsmen. She excels in leadership and warfare while faring poorly at politics and intelligence. She has more aptitude with pike troops and her personal ability increases her damage with it. While not married by default, Huaman shares good chemistry with Guan Suo and will often aid him in battle if deployed in separate units. the same also occurs with Bao Sanniang and the Wang sisters if the player unlocked them. Compared to her mother, Huaman's stats are slightly more balanced. The ps2 version of the eleventh title includes Huaman in the defense of Yu Nan challenge scenario. She act as a sub-commander for Meng You's army and, if defeated, will trigger an event where Zhuge Liang order her imprisonment while Guan Suo is impressed by her beauty. The fourteenth title lowers her WAR stat but she is still an capable commander on her own. The arrow formation is an option for her an ideal for direct combat. The snake formation is another possibility when dealing with forests or mountain terrain. When not in battle, Huaman can develop barracks as an overseer. 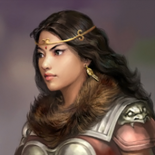 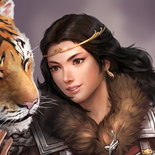 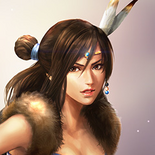 Paired portrait with Meng Huo
Add a photo to this gallery
Retrieved from "https://koei.fandom.com/wiki/Huaman?oldid=459867"
Community content is available under CC-BY-SA unless otherwise noted.