In Mystic Heroes, he is called Raja in the English port. In the English version of Saiyuki: Journey West, his divine name is Hei Reiko and he becomes the Warrior Guardian.

Sometime before the first game, Huang Tianhua dedicated his life to his sword training. Abandoning his responsibilities as Huang family heir, he estranges himself from his home and wanders the land for his master.

While Taigong Wang's party is passing the second gate, Chen Tong greets Huang Feihu and feigns friendly relations. As Huang Feihu drinks at his host's banquet, Chen Tong attacks the hero's sober members. Midway through the struggle, Huang Tianhua interrupts the battle and slices Chen Tong. After Chen Tong's death, he remarks that his master told him to aid the commander. Originally intending to only help for the small conflict, he is unimpressed by Taigong Wang's subpar performance and, though he invites himself into the strategist's forces, he refuses to respect his new leader. He momentarily reconciles with his father during their trip. When they revisit the second pass on their way back to Morning Song, Huang Tianhua expresses his friendlier admiration for their leader. After the final battle, he and his family work to restore the capital under Ji Fa's reign.

In Fengshen Yanyi 2, he is a deputy commander for the Zhou Dynasty. His troops spot Wen Zhong in Ziya's party and attack on impulse. Before more soldiers try to intercept the young hero's group, Huang Tianhua stops them. Seeing Taigong Wang's divine whip with Ziya and Wen Zhong, he hurries them for an immediate audience with King Wu. Upon the king's orders, he escorts Ziya's expedition to eradicate various calamities in the land.

He continues to play a supporting role in Mystic Heroes.

In this title, Huang Tianhua appears as a divine being who crashed into the human realm aboard a meteorite sixteen years before the game begins. Known under his divine name, he accidentally collided with Lady Kikka. Both of them were sent into the dream world and were in danger from Mahoraga. He apologizes for intruding on the dryad when he materializes before Sanzo and orders the monk to help Lady Kikka in the real world. He utters that Sanzo reminds him of someone he used to know before resting within the staff. When he's summoned, he increases the physical defense of party members and Sanzo can use his divine blade in battle.

Though he looks composed, Huang Tianhua is actually a proud and boastful warrior. He is utterly confident in his abilities and isn't afraid to show his worth at any given chance. He does not usually favor serving people younger than him and therefore does not think highly of Taigong Wang or Ziya during their first meeting. While he speaks in a rude and sometimes condescending tone, he is actually a caring person who wants to protect the less fortunate and also tenderly loves pets and animals.

He frequently clashes with his father since his training was considered an abrupt and selfish choice by Huang Feihu. They bicker with one another regarding their conflicting opinions, but they will cease to argue if observers intervene. Unless he is meeting someone for the first time, he does not prefer to be called his full name since "Huang" reminds him of his father. Even if he fights with his living parent, he acts as an admirable figure for his younger brother. Their temperaments for one another are softened in the following titles.

An old friend of Deng Chanyu, he is known to speak of various old tales of their time together, such as her horrible cooking experiments and old places where they used to play. He generally thinks highly of her since she beat him in several fights during their youth. As they both respect Taigong Wang, they sometimes have minor arguments over who knows the most about him.

Huang Tianhua is a character who relies on offensive strategies. While he is not the strongest character, his luck allows him deal several critical hits that may surpass other power characters. Since he has good speed and defense, he is best when on the front lines. He can also assist as a secondary mage character if needed.

In Fengshen Yanyi 2, his attacks have a lightning motif to them. He cannot equip paopei, but his AI has powerful physical attacks to compensate. If he is in the active party whilst traveling across the field, Huang Tianhua may randomly intimidate weaker monsters and negate the battle entirely. The player will be given white gems as compensation. His special battle ability surrounds him with a glowing aura which allows temporary invincibility.

His attacks become wind based in Mystic Heroes.

The following lists his starting weapon and magic proficiencies in Fengshen Yanyi.

The following lists his stats in Mystic Heroes.

Huang Tianhua was Huang Feihu's eldest son who left his family to be tutored by Master Virtue of the Pure Void when he was three. He wore golden armor and wielded the mystical Moye Sword, twin golden-tipped hammers and his master's Fire Dragon Javelin. He rode a unicorn, which transported him to any location in mere seconds.

When his father and his vassal Zhou Ji were killed by injuries caused by Chen Tong, his master sent him to aid his father's plight. Given a flower basket and a sword, he rode to his father's camp with great speed. Since he was separated from his family from a young age, many soldiers did not believe he was related to Huang Feihu. One of his uncles, Huang Feibiao, saw the resemblance of his brother in the young man's visage and politely invited him within the camp. Though inwardly anguished to see his father's corpse, Huang Tianhua resurrected his father by dissolving magical pills from his flower basket with water and pouring it down Huang Feihu's throat. As he did the same with Zhou Ji, his father had risen. After he formerly introduced himself to his family, Huang Tianhua wondered about his mother's whereabouts and was faced with the grim reality of her demise due to King Zhou's lecherous nature. Grieving for his mother, he swore to give his life for King Zhou's downfall.

Shortly after, Chen Tong returned to harass Huang Feihu's army. Although his father had routed him, Chen Tong faked a retreat and hurled his magical javelins from a far distance. Shielding his father with the flower basket, Huang Tianhua decapitated the head strong Chen Tong in one blow. With his task finished, he tearfully bade farewell to his father and promised that he would someday see him again in the Western Foothills.

As Jiang Ziya faced Wen Zhong's army and the Diablo Brothers, Master Virtue of the Pure Void told him to assist West Qi. Giving his disciple three weapons and his mount, Huang Tianhua joined the offensive against the Shang army. Around sixteen at this time, he bravely challenged the Shang main camp the following day. He faced Mo Liqing and suffered a mortal wound. Nezha carried his body back to West Qi but he had already passed away. Huang Feihu mourned his son's passing until a messenger from Huang Tianhua's master took his body back to Master Virtue of the Pure Void. Revived from his mortal slumber, his master reprimanded his fool-hearty display and gave him a tool to counter the White Jade Ring used by Mo Liqing. He used the item he received, The Heart Piercing Nail, during his rematch with Mo Liqing and instantly caused the latter's death. Huang Tianhua also used the second nail he was given, which killed Mo Lihai and Mo Lihong in mere moments. Since Yang Jian was posing as Mo Lishou's mink, he saved Huang Tianhua from the final brother. Huang Tianhua collected the nails and they returned together with the four Diablo Brothers' heads.

Although frightened by his opponent's beastly appearance, Huang Tianhua braved enough courage to defend Jiang Ziya from Wen Zhong's general, Xin Huan. Thanks to him, Jiang Ziya was unharmed by the bandit chief and was able to concentrate on his duel with Wen Zhong. He continued to participate in the following battles that caused Wen Zhong's downfall, killing one of Wen Zhong's disciples, Yu Qing, and wounding Xin Huan with one of his nails. When Deng Jiugong attacked West Qi in retaliation, Huang Tianhua mocked Nezha for losing to their enemy's daughter, Deng Chanyu. Confident that he could deal a crushing blow to the woman, he was the next to face her. They dueled violently for a time but, when she feigned retreat and Huang Tianhua followed, she wounded his forehead with the golden pebble she hurled. His defeat was in the same manner as Nezha's and he had additionally suffered a worse wound than his comrade. Both he and Nezha would share the same defeat when they faced Earth Traveler Sun and were captured within Deng Jiugong's camp.

Huang Tianhua continued to fight against Su Hu and Zhang Shan, taking part in the battle formations under his father or Jiang Ziya's command. As the army had finally made plans to attack Morning Song, Huang Tianhua was ordered to lead the frontal vanguard. The Zhou army had marched to Golden Chicken Range, just outside Sishui Pass. Shang general, Kong Xuan, marched from Sishui Pass to intercept them. When Chen Geng challenged Jiang Ziya's camp, Huang Tianhua volunteered to duel the general. Striking his competition down with the Fire Dragon Javelin, Jiang Ziya recorded his general's achievement onto paper. As he wrote, the point of his quill broke and Jiang Ziya was sadden by the omen, meaning that it would be the last achievement that Huang Tianhua would make.

As the Zhou army tried to ambush the Shang army camp, Huang Tianhua was attacked by Gao Jineng. Gao Jineng unleashed his bag of wasps and hornets, wounding Huang Tianhua's mount. As the general fell to the ground, he was gravely wounded by Gao Jineng's spear and his life was cut short soon after. Huang Tianhua was one of the first casualties among Zhou's most talented generals. Upon hearing the news of his son's death, Huang Feihu was stricken with such a heavy grievance and shock that he momentarily lost all feeling of his senses. Wanting to avenge his son, Huang Feihu obtained Chong Heihu's assistance and bravely charged into battle the following day. With Chong Heihu's hawks devouring Gao Jineng's insects, Huang Feihu gained his vengeance by killing Gao Jineng in one blow.

When Jiang Ziya was naming the gods, Huang Tianhua was the second name to be mentioned and became Bing Ling Gong of the Three Sacred Mountains. 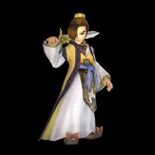 Saiyuki portrait
Add a photo to this gallery
Retrieved from "https://koei.fandom.com/wiki/Huang_Tianhua?oldid=188729"
Community content is available under CC-BY-SA unless otherwise noted.