Hundun (onyomi: Konton) is a mythological Chinese figure long considered the source of all chaos. One of his bestial counterparts has a canine-like body with long hair with eyes that could see, but with ears that could not hear. It bites on its tail in a fetal position, repeatedly turning in a circle, seeming to smile as its face rolls toward the sky. A fickle and sometimes described as idiotic beast, it despises siding with good people, loves to be with those of evil. Either version of Hundun is considered one of the Four Fiends of Chinese mythology.

Before his playable Warriors Orochi persona, his name was used in Asian ports for a generic officer that shared Dodomeki's design. The English localization named him Hammerjaw, a type of jumping spider. His playable counterpart is designed by Akihiro Yamada. He is the final boss in Gauntlet Mode.

In the fourth game, he can be unlocked by defeating him on the special Pandemonium difficulty after clearing the game once.

His character incarnation only appears as the final boss in gauntlet mode and is thought to be the reason why worlds collide and how other characters keep coming into the world Orochi has created. He sets up lots of challenges involving dragon portals and keeps the miasma of the Orochi world flowing, allowing for greater evil. When he is defeated, he merely goes back to sleep instead of dying finding the challenge amusing. When joining the coalition camp, he tends to forge bonds with demonic characters and isn't outright nihilistic, as evidenced by conversations with Dodomeki and Gyūki, giving them fashion advice.

Possibly due to a glitch, he makes a random appearance in the DLC stage 'Defense of Itsukushima'. His generic counterpart Hammerjaw also has a large role in Warriors Orochi 3 where he serves as an advisor to Yuan Shao, manipulating and corrupting him so the Orochi army can use his considerable forces to their cause. He is later deflected off by Jia Xu's strategies at Jiange but returns in another scenario in Ultimate where this time he is tricked by Yuan Shao at Shizugatake yet is still prepared for the outcome and is further strengthened by sorcery, acting as one of the commanders of the stage. In other stages, he is reduced to a mere frontline unit.

Hundun has a very unique role in Warriors Orochi 4. While he doesn't actually appear in the story, there is a chance that he would appear in a past battle, and the player is notified of his presence in the camp menu. If the player does a battle with Hundun's presence, the enemies near him will be a lot stronger and he will appear several times throughout the battle in question in order to menace the allied army. Certain characters will also comment on his appearance. In order to obtain him as a playable character, the main story must be cleared first. Afterwards, defeat him once in a mission and he will be unlocked.

Haughty and arrogant, Hundun is a demon who seeks to destroy anyone attempting to bring order to the dimensional realm. He loathes the prospect of peace and relishes chaos.

All of his weapons' names are words commonly used to describe his general role in mythology as a never-ending source of chaos.

"Perhaps when I'm disguised as a human, but looking like this, I can't help but think you are being insincere."
"Why would you think that? I honestly like the way you look now."

"Hehe... A chaos-loving demon. I like the appearance you have chosen to adopt."
"Haha, do you just? It seems you have good taste. I like you already. Let us fill this world with mayhem together."
"Hehe... This sounds fascinating. Let us see what havoc can be wrought by the winds and the demon."

: Uses his wings to launch himself airborne, ground implodes with the force of his wings and sends surrounding foes flying with him.

: Stomps the ground with his left leg creating a time warp that stuns enemies around him. Sends a giant crisscross long-ranged projectile to the front.

: Smashes the ground with all four of his hatchets

R1: Causes Hundun to flap his wings and fly in the air for a short time.

, R1: Hundun charges at the enemy while cloaking himself within miasma.

: Launches a cloud of dark energy that bursts on the ground at close range.

: Swings weapons back and forth while riding horse.

Myths and legends involving Hundun vary greatly in terms of describing its origins, form, and purpose. Several Daoist texts refer to it more in abstract terms as a state of inner unrest rather than an actual being itself.

A famous parable from the Zhuangzi tells the story of Hundun who lived a content life at the center of the world until many rulers from the outside sought to give it facial features out of gratitude for its hospitality. They used chisels and drills to dig seven holes into its body (one for each day), which also correlated to the amount of orifices found on the human face. Unfortunately, it resulted in Hundun's death and the birth of order in the world. This tale is also a cautionary tale to prevent those from associating their true identity with their public appearance.

The Shenyijing depicts Hundun as a dog of divine origins that can't see, hear, walk, or digest food. It was said to have lived within Mt. Kunlun. The creature possessed a human intellect yet it preferred being in the company of corrupt men over those with virtue. On the other hand, the Shanhaijing describes it as a deity of song and dance with a yellow sack-like body. While it lacked eyes and a face, it had six feet and four wings instead. 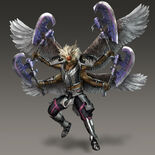