Hyrule Warriors (ゼルダ無双, Zelda Musou) is a collaboration title between Omega Force's Warriors IPs and Nintendo's long-running Legend of Zelda series. Hyrule Warriors was voted one of the top ten Wii U titles of 2014 by Club Nintendo members. It led to Legends and Definitive Edition releases on Nintendo 3DS and Nintendo Switch and then a sequel announced in September 2020 to be released on November 20, 2020 entitled Age of Calamity set 100 years before the events of Breath of the Wild.[1]

Hisashi Koinuma and Yosuke Hayashi are the producers; Eiji Aonuma is the supervisor. The director for the Koei-Tecmo side is Masaki Furusawa. According to Aonuma, the developers consider the game a "celebration title" created by and made for Zelda fans. Kou Shibusawa is uninvolved with development but expressed hopes for the title to sell one million units worldwide. On January 27, 2015, it was announced that this goal was met and free wallpapers became available as thanks to consumers.

Early buyers can receive a serial code for three "Courage" costumes that can be used in the game. The Premium Box edition has an illustrated databook, a Triforce table clock which plays a short version of the main theme as an alarm, and three "Wisdom" costumes. The larger Treasure Box edition includes the first print and the Premium Box bonuses with a Link scarf, a miniature treasure box replica that opens with the familiar Zelda tune for treasure, and two "Power" costumes. Consumers who ordered the game from Gamecity received an exclusive postcard set with their purchase. Wonder Goo offered a limited edition strap.

The game's downloadable version is 7.8 GB. Its narrator for the Japanese dub is Mie Sonozaki and Esra Guler in English.

The Triforce is an artifact of hope containing pieces of "Power", "Courage", and "Wisdom" with the power to grant any wish. Long ago when an ancient evil threatened to overtake Hyrule, a hero assembled the Triforce to defeat it. The villain's soul was sealed into four fragments. Three of the fragments were sent to faraway lands through dimensional portals and one was sealed within the divine Master Sword.

Cia is a witch who was tasked with maintaining the pieces of the Triforce. Although once a good person, Cia became infatuated with Link and envious of Zelda. Her jealous mind unleashes the once sealed evil onto Hyrule. She creates a world combining the Twilight Princess, Skyward Sword, and Ocarina of Time realms. Link must save Hyrule from the clutches of darkness.

The basic controls and basic gameflow are similar to most Warriors titles, Y being the normal attack and X serving as the charge attack. Other maneuvers include evasive dodge-rolls (B), dashing (B), and back flips. It is possible to play the entire game on the GamePad only; the Wii U Pro Controller and the Wii Remote + Nunchuk setup is supported in local multiplayer mode. On the GamePad, two preset button schemes are selectable - one each tailored for Zelda and Warriors players.

Hearts represent health and can be increased for all playable characters by finding Pieces of Heart or Heart Containers in the various stages, though these can only be found by characters with an appropriate heart icon in the stage selection screen. 1/4th of a Heart is equal to 100 damage. Leveling up boosts a character's health capacity and attack power, and characters can fill the Experience Gauge located under the KO Count by defeating foes.

The green bar in the GUI is the Magic Bar from the Zelda series. It fills up by picking up magic pots from defeated enemies and Green Pots. Once it is filled, players can activate a spell called Focus Spirit that enhances their character's power and speed for a limited time to constantly break enemy guards. Defeating many enemies with Focus Spirit can grant large KO count bonuses, such as higher drop rates or additional EXP.

The yellow bar is the character's Special Technique gauge, which can be filled by finding Triforce pieces around the map or by attacking foes. Leveling up during battle completely fills the Special Gauge.

Players are encouraged to find an enemy's weak point in their attack patterns. If successful, enemies will be stunned and a "Weak Point Gauge" hovers above them. The objective is to gradually chip away at the gauge's endurance before they recover. If the player completely destroys the gauge, then massive damage is dealt to them with a "Weak Point Smash" attack. Powerful bosses serve as the main threat for each level and have unique attributes to deviate from mobs.

Characters have access to various weapons and items from the Zelda universe to deal with enemies, which can be acquired by defeated foes or opening chests (Y). True to Zelda, these items (use with ZR) play critical roles in defeating giant bosses. Players can only change their arsenal before a battle by visiting the following facilities at the bazaar.

Main story mode separated into eighteen chapters. Clearing this mode unlocks the second Gold Skulltula on a map and a Harder difficulty setting.

Reprise of other Warriors titles. Allows the player to replay unlocked Legend Mode chapters as any unlocked character.

Board game experience which uses classic Legend of Zelda NES visuals. This mode must be played to unlock additional characters, higher-leveled weapons, more heart pieces, and Gold Skulltulas. Online interaction is available only in this mode.

Each stage has a recommended element which may influence how players choose their characters and weapon styles.

A playable demo was present at E3 2014 with additional playable characters (Zelda and Midna) revealed. An early peek of Nintendo's E3 Zelda trailer was posted onto Twitter before the main event. It was given coverage during E3 Nintendo Treehouse Live and an after show session.

Producer Hayashi presented the game during the second half of the July 24 Denjin☆Gacha! episode. The completion conference was broadcast live on July 31, 14:00 (JST). Kou Shibusawa, Shigeru Miyamoto, the supervisors, the producers, and Haruna Iikubo, Morning Musume. '14 member and sub-leader, were appeared for the presentation. The idol received a treasure box with Miyamoto's autograph and gleefully showed it off on the group's blog. Nico Nico users could watch a follow-up program that included a Twilight Princess Let's Play on August 1, 20:30 (JST). It was the star title for the August 5, 12:00 (JST) Nintendo Direct episode.

It was one of the playable demos at Koei Tecmo's Tokyo Game Show 2014 booth. This game had three stage events at the Koei-Tecmo stage for the four day event; the first two were dedicated to announcing and featuring future updates while the last one was a tournament.

A closed early trial in Japan took place July 31st. Participants received an original clear file for their trouble. On August 30 Nintendo hosted an event at the Renaissance Seattle Hotel by Marriott where players could play the full game, interact with a Zelda cosplay actor hired by Nintendo, and gain access to merchandise.

Weekly Famitsu included a digital compilation within its September 4 issue. Two guidebooks are planned. The first includes Legend Mode maps and general combat tips while the second has tips for Adventure Mode. Purchase the limited Gamecity Shopping offer for both guidebooks to receive a fabric poster of the main visual. 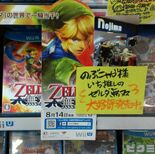 Nintendo joining in on the Ganondorf hair meme

Thank you message to players from the development team