Jack is one of Kaido's Disasters and an All-Star of the Animal Kingdom Pirates. He is the designated ruler of Kuri. One of his known acts was trying to conquer Zou for Kaido, but Inuarashi nekomamushi and the Minks battled him for five days until Jack was forced to retreat.

Jack then tried to extricate Donquixote Doflamingo who had suffered a grueling defeat at the hands of Luffy, but failed. He then attempts to conquer Zou again and was driven back by Kozuki Momonosuke.

He is known as jack the drought because whenever he passes through an area it is left in a decade ruined state as if it suffed an actual drought.

Violent and short-tempered, Jack would threaten to decimate entire cities that do not surrender to him. He would blame the citizens for the city's destruction saying it was their own fault for not obeying his demands. Jack is not open to negotiation or peace talk and grows angry when people try to reason with him. He's also reckless as he was willing to battle 4 ships worth of marines including an admiral and the former fleet admiral.

Jack fights in a large mammoth-life form and can use his trunk for a whip or stomp his paws on enemies.

When fought as an NPC, Jack fights using his mammoth form. 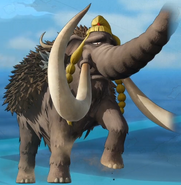 Jack in Zoan form.
Add a photo to this gallery

Retrieved from "https://koei.fandom.com/wiki/Jack?oldid=446205"
Community content is available under CC-BY-SA unless otherwise noted.