"First Son of the Sea" Jimbei (海侠のジンベエ Kaikyō no Jinbē) is a whale shark fishman, the second captain of the Sun Pirates and a former Warlord. He is a former friend of Arlong, having once fought together until differences in opinion regarding the human race forced them to split apart. Since then, Jimbei fights for the sake of all those in need regardless of their race.

Jimbei is a man who follows a strict code of honor and pride. A man of his word, he is one who always does what he feels is best depending on the situation at hand. He is even willing to become a Pirate, beings whom he hates due to human pirates selling Fishmen and Mermaids as slaves, in order to save Ace from his execution. He was good friends with Whitebeard and Ace, and deeply sympathized with Luffy after their deaths. Despite his appearance and strength, Jimbei is a kind man who is willing to do what ever it takes to help those in need.

: "Exploding Palm Bomb~5,000 Brick Fist": Jimbei does a downward diagonal chopping motion with his right hand, followed by a left-palm thrust. He then swings his right fist downwards, followed by swinging his left fist upwards, which summons a small stream of water to attack enemies. He finishes by assuming a classic karate ready stance and winds his right arm, then unleashing a powerful punch that blasts enemies away.

: Jimbei leaps into the air with a front flip, and lands down hard with a shockwave, launching enemies up. He then reaches out and grabs a single enemy with his right hand, then proceeds to swing the enemy left and right 8 times, battering other enemies with the enemy in his hand. He finishes by throwing the enemy down hard onto the ground.

: "Arabesque Brick Fist": Jimbei readies a punch in classic karate stance, and then unleashes it, sending a shockwave. It produces a small water whirlpool that sucks enemies in for a second, then erupts and blasts the enemies away.

: Jimbei reaches out and grabs a single enemy and then throws them hard onto the ground. He then unleashes a powerful punch on the downed enemy with his left fist, producing water shockwaves that blast away nearby enemies.

: "Ocean Current Shoulder Throw": Jimbei places his hand on the ground next to him, causing a small water geyser to erupt in front of him. He then picks up a large blob of water as if it were tangible cloth, and then swings it around him, then throws it down onto the ground in front of him with a splash.

: "5,000 Brick Fist": A large whale shark leaps out of the ground, launching enemies up. It then does so a second time, launching the enemies towards Jimbei. He then readies himself and unleashes a powerful punch that releases shockwaves.

: "Shark Pack~Shark Arrows": Jimbei waves his arms back and forth, summoning a pack of smaller sharks to leap up out of the ground and dive back in as if the ground were water, juggling enemies. He finishes by throwing forward a barrage of water projectiles.

: Level 1 Musou: "7000 Brick Roundhouse Kick": Jimbei places both hands on his knees and squats down into a Sumo pose. He then lifts his right leg up high and does a Sumo stomp, which launches nearby enemies into the air. Then, using the same leg, he kicks the airborne enemies forward.

: Level 2 Musou: "Vagabond Drill": Jimbei winds up his left arm, and a small water bubble forms on his left fist. He then punches forward, releasing a massive shockwave that knocks enemies away.

R1 (Special Skill): "Sharkskin Pal Thrust": Jimbei assumes a defensive stance, and holds the stance for a second. If he is attacked while in this stance, he will counterattack by performing a watery uppercut.

Jimbei is a whale-shark Fish-Man, and is a master of Fish-Man Karate, in which he obtained a black belt as a child. Fish-Man Karate revolves around the manipulation of water around the user's vicinity for attacks. It can also be used to send powerful waves through the air that impact the water content in an enemy's body. Jimbei's fighting style revolves around slow but powerful strikes and punches that can manipulate water, while also having decent one-on-one potential through several grapple moves. On top of manipulating water remotely, he can also touch and grab water as if it were like tangible cloth, using it as a weapon to swing at enemies. As a whale-shark Fish-Man, Jimbei also has the unique ability to communicate with whale-sharks, occasionally calling upon them to aid in his attacks. 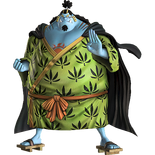