Kasumi (かすみ) is an original character created by Team NINJA for the Dead or Alive series. She is a rogue kunoichi of her ninja village, having abandoned her home to pursue the personal vendetta of revenge. Although she achieved her goal, Kasumi fights to save the world from her murderous clones created by DOATEC while evading execution from her half-sister, Ayane.

Her playable Koei appearances are Warriors Orochi 3 and Warriors All-Stars.

Prior to Warriors Orochi 3, Kasumi was tracking down one of her clones, Alpha-152. She was dragged into a distortion of time-space and arrived in the dimensional realm.

While fending for herself at a Dead or Alive arena in Yan Province, she comes face to face with Ayane and her companions who had come to repel the demonic forces within the area. While hesitant to work alongside her half-sister, she is encouraged to fight alongside them when Nemea and Diaochan save her from a rear attack. After winning the battle, she decides to join the Coalition for the greater good.

Kasumi, Marie Rose and Honoka are all teleported into Prosslyn Castle (& Balmagyr), while wondering where they are the trio notice Setsuna being thrown down a set of stairs by none other than Lu Bu. Before Lu Bu strikes, Kasumi teleports in and saves Setsuna, defending him. Lu Bu challenges the three and Kasumi warns the other two that Lu Bu seems dangerous and they prepare to battle.

After the duel, Setsuna tells them of the Spring and how his world is crumbling. He also tells the trio how his cousins, Tamaki and Shiki, are usurpers and they should be dealt with, much to Marie Rose's surprise. Kasumi tells Setsuna that she does not trust him but is, however, willing to fight alongside him in order to get home. She further goes on to say that if he tries something, something may happen to him.

After gathering the Heroes, Kasumi and Setsuna go to battle with Shiki's forces. Kasumi (if the side-quests are successfully completed) will then infiltrate the enemy camp once a certain base is taken. When the battle is won, Shiki explains how only Tamaki can control the Spring which surprises Kasumi. Once Shiki leaves Kasumi asks Setsuna why he's fighting if he can't control the Spring, then Setsuna admits that he is not as strong as Tamaki but knows another way of becoming the King.

After the last battle, the other Heroes along with Kasumi become quite upset with Setsuna for not telling them everything. Setsuna tells them that no matter what he tells them, their goal remains the same. Kasumi says that she cannot fight alongside him in the manner that they are and Laegrinna boredly asks if the entire ordeal is over as she wants to get back to her home. Arnice laments how he should forge bonds with his allies, to which Setsuna presumes that the Heroes do not think of him as their comrade. Arnice then sadly comments on how it is he who doesn't think of them as comrades. After they leave, Setsuna is caught up in a ploy set by Shiki to which Laegrinna finds out about and casually tells Kasumi and Arnice. Kasumi and Arnice, completely shocked, go to save Setsuna and escape with him.

After defeating Ryu Hayabusa, they return to the Spring and Setsuna finally tells them the true reason why he's fighting. The three (Kasumi, Arnice and Laegrinna) agree to help him.

Kasumi appears alongside Nobunyaga Oda, Laegrinna, Arnice and Marie Rose as Setsuna's main Heroes, meaning they cannot be obtained by any other clan. Kasumi actively participates in most of the battles unlike her Warriors Orochi 3 counterpart where she only appears in two Yan Province battles.

If completing the Untold Intentions battle (must be friends with Kasumi and Nobunyaga) and not befriending Laegrinna, you can choose to seize the world for yourself. As soon as Nobunyaga suggests taking dominion over the land, Christophorus jumps at the idea and goes with it. Now, the player can choose to stay wih Setsuna or go with Nobunyaga. If you go with Nobunyaga, you will get access to a battle which gives the specified ending.

After defeating Tamaki and Shiki (presumably killing them), Setsuna is also defeated. Nobunyaga then holds Setsuna at gunpoint before getting bored, saying that an easily dominated world is boring. However Kasumi, Arnice and Christophorus quickly catch on that Nobunyaga was just speeding up Setsuna's progress. The four of them begin to leave before Setsuna attempts to get the four of them to stay, to which Arnice remarks that a King should not have traitors at his side. Kasumi also adds on that this was the decision they made before Christophorus tells Setsuna to "be nice" to his new friends. After all is said and done, Arnice wishes him luck as they walk away with Setsuna bowing to them.

Kasumi is one of the characters of which you may choose to add to your party if you so wish. If she is not added to your party she will go with Setsuna/Tamaki & Shiki (depending on whom you choose to stay with) and will get brainwashed by Yomi alongside the others. Here, her role is rather small compared to the rest of the game but, like the rest of the cast, will say a rallying line in the true fight against Yomi.

Once Yomi is purified and the Heroes begin to be sent back to their world by Tamaki, Shiki and Setsuna, Kasumi stands next to Arnice with Honoka, Marie Rose and Christophorus as she thanks the trio for everything which has happened.

For her reprisal in Warriors All-Stars Kuwashima took care to adapt to the complicated direction she was given for Kasumi. She was told to "sound younger" or "sound less cute" for her serious scenes.

A kind and honorable spirit, Kasumi is a compassionate young woman who tends to act before thinking. In spite of her skills as a kunoichi, she does not take any joy in fighting but can kill in cold blood should she deem it necessary. While she is friendly with Ryu, she and Ayane share a tense rivalry. Her sister's animosity for her has lessened in recent entries. In her first Warriors Orochi appearance, she also shares an affinity with Nemea, Diaochan, and Kunoichi.

Kasumi's weapons, when combining each of the first syllables, are a distinct reference to the Mugen Tenshin clan. Her fourth weapon is also meant to invoke the imagery of cherry blossoms scattering about. In the language of flowers, cherry blossoms often embody the concept of transience in all its forms including the cycle of life and death. This is a nod to Kasumi's status as a fugitive on the run as well as her affinity with the flower itself.

"Hmph. You're as sappy as ever I see. Don't forget, the only reason..."
"You let me live is to get back home, I know. However, for just now, let me be your sister once more."

"I appreciate the offer, Darius. However, I must face my destiny head on."

"Hehe… You're tough. You remind me of someone I left back home. Daring and strong, yet innocent at the same time…"

"I can tell from your face that this person is important to you. The kindness and lonliness are plain to see."

"Hehe… Let's work together to try and get you home to this person as soon as possible."

): performs a series of slashes while teleporting around enemies.

): Sends opponents flying into the air, jumping up after them, then performing a series of slashes while they're air born.

): Performs a series of slashes, then performs a powerful slash while jumping up into the air, then slamming her sword into the ground.

: Performs a simple, yet powerful, slash that sends enemies flying.

till Wind Flash: Performs two simple slashes once to the left, then to the right.

till Flame Swirl: Performs two simple slashes once to the left, then to the right, then performs an rising sword strike that generates a tornado that juggles enemies a few moments before sending them flying.

, R1: Stomps on top of an enemy repeatedly, then launches them into the air via somersault.

: Dashes about at high speeds, slashing at opponents within her path.

(True): Charges pink and black energy into her right hand, then thrusts it forward creating a beam of energy. Damages enemies directly in front of her by long range, as well as those in all sides at mid range.

Some of Kasumi's abilities and skills are references to the ones she has in the Ninja Gaiden series.

: Kasumi punches forward with her left fist, then punches upward with the same fist. She then swings her left fist to the left, then does a leaping twirling kick to the left. She then leaps up and does an aerial cartwheel kick downwards, then finishes by kicking to the right with her right leg.

: Kasumi swings her arm up left in an uppercut, leaps forward and double-kicks, then disappears and reappears to stamp kick on the enemy. She finishes by reappearing and swooping down to the ground.

): Kasumi does a backflip kick to launch the enemies upwards. Kasumi then vanishes, two of her clones then appear on either side, and dash through the enemies to damage them. Kasumi reappears in the center and does a short hop to kick forward twice. She vanishes again and two of her clones appear on either side to perform a stamp kick simultaneously before disappearing. Kasumi then reappears in the center with a twirl.

): Kasumi swipes her hand to the right, then disappears and reappears while leaping forward and kicking twice. She then disappears again, and three of her clones swoop down onto the ground before disappearing. Kasumi reappears in the center does a stamp kick forward.

): Kasumi does a double-handed palm thrust, then disappears. Four of her clones appear in the air as 4 corners of a square, then they each successively dive down onto the center of the ground before disappearing. Two more clones appear in front and leap towards the camera and kick twice before vanishing. Kasumi then reappears in the center air and does a forward stamping kick.

: Kasumi swings her right arm to the right.
Dashing +

: Kasumi swings her right arm to the right.
Jump +

: Kasumi does a flip and stomps downwards with her feet repeatedly.
Jump +

In her Warriors All-Stars appearance, Kasumi resorts to her skill in physical combat, and her proficiency in her ninjutsu, particularly her ability to create clones of herself. Her normal string is composed of swift physical strikes, while her charge attacks has her summoning her clones to attack in a large area. She doesn't have a lot of forward momentum during her charge attacks, resulting in her not being very mobile during them.

Kasumi uses the following big star weapons in the game. 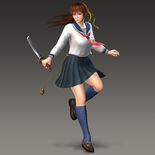 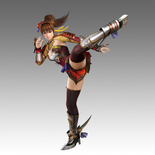 my GAMECITY avatar parts; red dye was her common 2P white and red; golden dye was her last DLC outfit

Retrieved from "https://koei.fandom.com/wiki/Kasumi?oldid=406691"
Community content is available under CC-BY-SA unless otherwise noted.