Katsunaga Mōri is a vassal of the Toyotomi family who is famous for being one of the last —if not the last— defenders of Osaka Castle, facing thousands of Tokugawa troops and generals before his end. He has been said to equal or be second only to Yukimura's level of prowess and charisma.

He appears in Samurai Warriors as one of the defenders of Osaka Castle. When Harunaga Ono refuses to let Yukimura through the front gate to speak with Hideyori, Katsunaga complies with Yukimura's request and opens the west gate. The following sequels reduces his role to a mere defender at Osaka Castle until the fourth title. He acts as the main spokesmen for the other Toyotomi heroes during the unification scenario. They act as a living barricade during the early movements of the battle and later reappear after Yukimura's charge to fight for Hideyori's defense.

In Spirit of Sanada, Katsunaga is among the rōnin that answer Chacha's call for aid against the Tokugawa in the incoming winter siege of Ōsaka. Like the other generals, he disagrees with Harunaga Ono's decision to hole up within the castle yet is forced to loyally follow it thanks to Chacha's approval of the plan. During the winter siege, Katsunaga was tasked with defending a separate area of Ōsaka and was unable reach Yukimura in time to support his chase after Ieyasu and Hidetada Tokugawa.

In the Summer campaign, Ieyasu's second army soon proves too massive and remaining within the castle is no longer a viable option for its defenders. Following Yukimura's suggestion, the Toyotomi forces exit the castle to do battle, but Matabei Gotō's unit becomes overeager in attacking the Tokugawa and ends up being isolated at Domyoji as a result.

The mountain's thick fog and Hanzō Hattori's ninjas soon cause chaos within the Toyotomi ranks, and Katsunaga ends up becoming one of the surrounded officers in the operation. Though the Matabei is killed, the other Toyotomi generals are able to successfully retreat and proceed to amass their forces at Mt. Chausu to open the path to Ieyasu. As soon as they break through, Yukimura decides to act in a solo mission and has Katsunaga and Chacha return to Ōsaka castle while he attempts to sweep through Ieyasu's camp.

Ultimately, Katsunaga is killed off-screen during the final stages of the siege.

Known as "Katsu" in Kessen, Katsunaga is among the Western army officers fighting for Mitsunari. He can be deployed to Sekigahara and Osaka Castle.

"Master Katsunaga! I, likewise, knew you would be here!"
"I finally get the chance to fight alongside you, Master Yukimura... For the Toyotomi clan, we must give our all!"

Mōri Katsunaga was born in Owari Province as one of Mōri Katsunobu (Yoshinari)'s sons. According to Taikōki, his father was one of the Seven Yellow Cloak Horsemen, riders who saw service as one of Hideyoshi's elite guard units. Depending on the source, his family name may have been spelled as Mori (森). It's unknown whether Katsunaga's family originated from the same roots as Mori Yoshinari's family line.

Katsunaga is romanticized as a man of indisputable courage and bravery, shining in the field as an experienced general. These ideas mainly emerge from his services during the summer Osaka Campaign, in which he would be known for his ferocious defense in the face of nearly hopeless circumstances. Like Sanada Nobushige, it's likely some of the stories regarding him may be exaggerated due to the mountain of folklore invented during the Edo Period. Even so, they do mirror several traits with one another: both share a similar battle history, romanticized images of a tragic loyalty to the Toyotomi clan, and dramatic deaths at Osaka Castle. According to the Buke Jiki, Kuroda Nagamasa didn't even know his name until Katō Yoshiaki informed him during the winter Osaka Campaign. Nagamasa then admitted, "I thought Katsunaga was a mere child until today. He composes himself as a true veteran", and was impressed.

However, despite being described as one of the true heroes of Osaka, his tales weren't as popular. As Kanzawa Tokō, a Edo Period author, lamented, "Regrettably, it appears Sanada will be told in the future, but not Mōri."

Katsunaga's wife is not known, but she is postulated to be a daughter to a Yamauchi retainer. His sons' names were Katsuie and Tarōbei.

In 1587 or 1588, his father was awarded the Kokura Domain in Buzen Province and 65,000 koku for his services in pacifying Kyushu and the Higokokujin rebels. The rewarded koku is sometimes stated to be much higher to 150,000 or 80,000. Once Katsunobu was established as a daimyo, his son was granted a portion of Buzen Province with 10,000 koku, therefore dictating Katsunaga's later adulthood alias as Buzennokami. While Hideyoshi was rearranging the Mori family, he decided to dub the Mori with the same spelling for the Mōri found in Chugoku.

Like his father, Katsunaga served Hideyoshi once he became of age. Not much is written or known about Katsunaga's early career aside from his participation in the ill fated Koren Campaign approximately ten years later. He supposedly took part in the sparse victories the Japanese armies had in Ulsan as a soldier of war. Since little is said about his activities, it's possible that his presence here is a fabrication of the Edo Period.

As the political powers of the land diverged after Hideyoshi's death, Katsunaga and his father decided to stay with the Toyotomi family. This was due to prior kindness and generosity Ishida Mitsunari showered on them before the wars ignited. Katsunaga marched to the center of the main island while his father stayed behind in Kyushu to defend their family territory. He joined the siege for Fushimi Castle and was honored for his extraordinary performance. Together with Nabeshima Katsushige, they received honors that were higher than Mōri Terumoto or Ukita Hideie. Katsunaga was rewarded 20 mai and 3,000 koku. However, their early sense of victory was squashed when Anotsu Castle and the main commanders at Sekigahara lost their ground. The Mōri themselves had suffered heavy losses and therefore weren't willing to stay at their position. Confusion seeped through the Mōri command as they fled back west to Kyushu.

Katsunaga and his father later decided to surrender to Kuroda Josui's army. Their territories and wealth were confiscated by Katō Kiyomasa. Father and son were then handed to Yamauchi Kazutoyo. Although held as war criminals, Katsunobu secretly sent lumber for reconstruction of Fushimi Castle when Ieyasu's supply was low. Ieyasu respectively accepted his father's offer to rebuild the castle as it once was during Hideyoshi's lifetime. Since his family had a history of being friendly to the Mori clan, Kazutoyo treated his prisoners with a little generosity by giving them 1,000 koku. He particularly favored Katsunaga's younger brother, Yoshichika, and had him adopted into the Yamauchi clan. Afterwards, their economy boosted to 2,000 koku. Gaining popularity with Yamauchi vassals, the father and son were secretly granted a life of luxury by living in the western pavilion of Kochi Castle.

It's possible that Katsunaga could have lived a luxurious arrest, but he chose to leave his exile in 1614. In one story for his decision, Katsunaga felt indebted to the Toyotomi family yet hesitated to serve under the young Toyotomi heir. He feared whatever loss he suffered would further burden his wife. His wife stated, "Your reputation is for the future of our family name. If you are to worry about me further, we will drown in this island's waves and be cut off from life." Without further ado, Katsunaga and his eldest son gladly escaped by crossing the sea routes at Tosa.

He saw action in both the winter and summer Osaka Campaigns. During the winter battles, he was one of the generals who advocated for an offensive front, an idea that was denied. He acted as a defender along the western fronts in both the war front and the castle town surrounding Osaka Castle.

Admittedly, Katsunaga is better known at this time for the story between him and Yamauchi Tadayoshi, the adopted son of Kazutoyo. In spite of Tadayoshi's allegiance to the Tokugawa clan, both men shared letters with one another and reportedly tried to meet in person several times during the conflict. Rumors state the men were very close and knew one another during Katsunaga's time with the Yamauchi clan. Once he learned Tadayoshi was forced to fight at Osaka Castle, Katsunaga followed him to stay beside him. Modern day interpretations will insist that it was a close brotherhood, but many speculate that they shared a heated romantic affair during the conflict. Tadayoshi's father, Yasutoyo, apparently learned of their bonds and forbade Tadayoshi's participation in the summer campaign to spare his son grief.

During the summer campaign, Katsunaga joined Nobushige's ranks at Dōmyō Village and other areas near Osaka Castle. Due to the thick fog, the Toyotomi troops lost many generals including Gotō Mototsugu. Nobushige turned to Katsunaga and stated with a heavy sigh that he was ashamed by their losses. The downhearted Nobushige looked as though he was prepared to die on the spot. Katsunaga kept positive and encouraged him to keep living, stating that Nobushige could only die in front of his lordship's (Hideyori's) horse. Their forces worked together to supply firearms for a safe retreat. During this time, Katsunaga is fabled to have worn Hideyori's helmet; he used it to draw enemy attention away from their escape route.

The following day, Katsunaga was one of the generals hastily stationed along Shitennōji to repel the incoming Tokugawa army. He and the other defenders faced over 4,000 soldiers at the front of the temple's gate. Katsunaga's troops were tenacious as they immediately defeated Honda Tadatomo, Ogasawara Hidemasa and several others during the initial movements of the battle. They swiftly charged through ten other Tokugawa units and neared the entrance of the Tokugawa main camp. Katsunaga's troops were ready to descend until news of the Sanada defeat led to the front line's utter collapse. Quickly surrounded by enemies on four sides, Katsunaga cut a bloody escape through thousands of Tokugawa soldiers. He changed the directions of his troops to ram straight through Tōdō Takatora's forces. As he neared the castle, Katsunaga and his men repelled Ii Naotaka and Hosokawa Tadaoki's armies a final time.

Once he retreated inside the castle, it's unknown what exactly happened to Katsunaga since nothing more is written about him. It is presumed that he reported the losses to Hideyori and assisted his lord's suicide; he and his eldest son then followed their lord into the afterlife. It's also said that his lord ordered them to kill themselves after learning their dire situation. His youngest son Tarōbei was captured by the shogunate forces and executed. 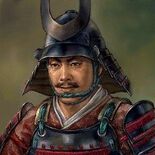 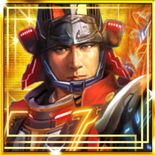 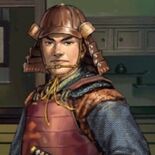