Not to be confused with a main character in Saiyuki: Journey West.

Kikka (橘花) is a secondary character who resides in Utakata Village. She has no function within the village and is present solely for narrative reasons.

Players who participated in Famitsu's Toukiden questionnaire ranked her as their seventh favorite character.

Kikka is Ōka's younger sister who was born in Unzen, the center of humanity's government in Nakatsu Kuni. She developed strong psychic capabilities since her childhood so she was trained to become a Barrier Priestess (神垣ノ巫女), an entity who protects a village from most demons with a magical barrier of stone pillars. Kikka also has the power to astrally project herself into a demon to aid reconnaissance and to sense a soul's memories. Her powers greatly sap away her physical strength, thus she is often kept indoors.

She is designated to be Utakata's priestess shortly after the protagonist's arrival. He/She first meets her playing outside their home with a stray Tenko on one of her breaks. She entrusts it to them before she returns to the Slayers' headquarters for a proper introduction. Shūsui soon inquires about her abilities and suggests a ploy to strengthen her barrier in private. Kikka hesitates to agree to it, afraid of the strain it might cause on her. The demons suddenly intensify their advances and break through the barrier. The Slayers exert their forces to deal with the first wave, splitting into individual solo parties. Wanting to stay connected with the protagonist, a weakened Kikka hands him/her a shard of her previous barrier. It allows them to communicate with one another.

Realizing that the warriors barely avoided disaster, Kikka agrees to strengthen the barrier. It causes unimaginable stress on her heart when it is first put up and leads to the priestess's collapse. Thanks to Nagi's efforts, she regains consciousness and resumes her duties quickly. As the protagonist's party dispatches to deal with the nearest threat to the village, Kikka communicates to them through her shard. She tells them to leave the smaller demons and guides them to the main demon conjuring them. Kikka is glad to have been useful and enjoys her break with the protagonist on their holiday. He/She escorts the priestess on a leisurely stroll in the village she helped protect.

Crisis has been avoided, yet Yamato would prefer to cut the invaders' source while they are still able. He orders for the Slayers to free the souls of multiple departed heroes so the protagonist can absorb them. Through the protagonist, they can then learn clues of the demons' movements. Once they locate the right soul, Kikka can use her astral projection to give the Slayers precise details. After several misses, the protagonist gets the information they need from Ieyasu's soul and Kikka pinpoints the commanding demon's location for them. For the time being, Utakata Village is saved from immediate danger.

During these events, Kikka's body has been wilting away. She lies that she is suffering from a cold, yet the mental stress becomes too much for her to bear. When the threat of another "Awakening" looms near, Kikka breaks down in the protagonist's arms and admits to them her fears of dying. Ōka happened to witness her sister's confession and commits herself to a suicidal charge to close the dimensional portal. As the protagonist and company fight beside Ōka, Kikka shares through the shard her wishes for her sister to keep living. The siblings become closer after the incident.

After a grueling battle, the protagonist uses her shard and his/her powers to seal the portal at the end of the main story. Like Kikka had anticipated he/she becomes their age's "innovator", or the "demon" who keeps the demons at bay. She is well enough to welcome the Slayers back to Utakata Village.

Kiwami has Kikka peacefully spend her days trying to cook good food for Horou, often mistaking ingredients in local recipes for inedible or poisonous ingredients. When the "Eclipse Demon" conjures a portal within her barrier, Yamato initially concedes to Kuyou's advice to abandon the village. Kikka is to remain behind to keep the barrier up for everyone's evacuation. After her sister and friends leave for a do-or-die resistance, Kikka convinces Yamato to change his mind off-screen and hurries to the battlefield. She personally uses her powers to shield Ouka and Souma from a Gouenma's attack. Kuyou escorts her back to the village afterward. While her sister returns to chastise her recklessness, the priestess is proud to have finally protected those dearest to her.

When her soul is being consumed by Izuchikanata, she is deluded into regressing back to her childhood. She cries in her loneliness and whines for her sister to find her. Kikka recovers and siphons her priestess powers with Kyokai to pinpoint the giant demon's location.

Raised and cherished with love, Kikka is a gentle maiden who wishes goodwill and charity for her neighbors. Her upbringing has led her to be extremely sheltered, and she may easily misinterpret anything unrelated to her duties. A part of her longs to be free and despairs over her forced duty. She initially envies her sister's strength, wishing to have the power to fight as well. Since she is always surrounded by guards or escorts, Kikka feels as though she is at times a burden to others.

Despite her frail constitution, she is passionate about her desire to protect. She gains the willpower and newfound pride in her powers to do anything within her capabilities to help, well aware of the dangers it poses on herself. Kikka's dedication to duty mirrors Ōka's; both siblings are serious and self-sacrificing if the situation calls for it.

Higher affinity additionally increases the chances of her appearing within the village's bathing area. 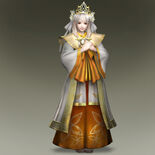 CG render
Add a photo to this gallery
Retrieved from "https://koei.fandom.com/wiki/Kikka?oldid=215385"
Community content is available under CC-BY-SA unless otherwise noted.