King Mu (of Zhou) (穆王, onyomi: Boku Ō) is the fifth ruler within the Zhou Dynasty, which is the era that followed the Shang Dynasty. In legends, he once rode to the mystic Kunlun Mountains and was said to have been greeted by Xi Wangmu.

King Mu co-stars in the Supernatural Immortal chapter of Shin Sangoku Musou Multi Raid 2. Long before the game takes place, he rode a horse carriage driven by his eight excellent steeds throughout the country and tried to reign over the entire land. Whilst in the western mountain areas around Shu, he was touched by his meeting with Xi Wangmu. In desperation after being separated from Huang Quan, the weakened goddess resurrects him to defeat her other half.

Confused by her plea, King Mu struggles to fulfill it since it might mean killing Xi Wangmu. Therefore, King Mu reluctantly serves under Huang Quan as his way of protecting Xi Wangmu. As his opponents notice his dismal zeal during their encounters, they offer their help. Eventually, King Mu agrees to their requests once they retrieve Xi Wang Mu in their company. She confirms for him that she will not disappear if Huang Quan is killed.

With the allied coalition's help, he then corners Huang Quan and defeats her in a climatic duel. The decisive blow costs King Mu his life and he collapses within Xi Wang Mu's arms. In his final moments, he is content to have granted her wish and disappears shortly after.

Known as a gentlemen who likes to live freely, King Mu is a reliable and kind individual. Acting as though he is always frivolous with his second chance at life, he is actually devoted and tenderly attached to his partner. He is the only character to call Xi Wang Mu by the name Yang Hui, his affectionate name for her. He struggles to accept Huang Quan since she is the exact opposite of the Xi Wangmu he admires, acting sullen and detached when in her company. However, as he dies, he admits to have accepted Huang Quan as a part of Xi Wangmu.

King Mu is the only notable character to have two awakened forms in Multi Raid 2. His first form has him enshrouded in various shades of purple to symbolize his inner conflict and enslavement to Huang Quan. The second one, which has King Mu decked in blue, is the form he takes after conquering his doubts with the help of Xi Wang Mu and the Coalition. It also acts as his default form when used by the player.

King Mu uses triangular blades as his main weapon in the game. 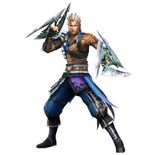