Kuyou (九葉) is a secondary character who resides in Utakata Village. His function is to provide exposition for the plot. He placed second in Famitsu's character popularity survey for the sequel.

Kuyou is an old acquaintance of Yamato and a masterful strategist of the "Slayer" organization. He was the strategist during the "Awakening" who gave the order to abandon the north to the demon horde. His word overpowered dissenters yet sullied his reputation to be "demon who abandoned the north". After the "Awakening" he chose to become a politician and became the leading official within the "Slayer" government.

Shortly before the Kiwami main narrative, the "Eclipse Demon" emerges within the north. Kuyou immediately suspects the Way of the Moon and Sun, a secret society of taboo demon researchers and enemies to the "Slayer" organization, to be responsible. He used his intelligence to locate one of its elders, Kyokai, and plotted to lure her into the open. The strategist called for his most loyal of subordinates to act as his daughter and allowed her to be held hostage by Kyokai. Kuyou feigned conspiring with Kyokai to study her motives and influence.

To appease Kyokai, Kuyou acts as the representative official of Sacred Mountain at Utakata and oversees Souma's Hundred Demon Corps unit. His word overpowers Yamato's authority, allowing Kuyou to become the de facto commander of the two factions. He prioritizes uniting their fighting capacity and the search for the "Eclipse Demon". In the meantime, he holds private meetings with Kyokai to enforce his servitude.

When the protagonist and Reki are missing in action, Kuyou rationalizes to leave them since they cannot afford resources for their rescue. Shuusui intervenes with his map and opinion for a rescue to object. Soon afterwards, Utakata Village in on the verge of being overrun so Kuyou orders for it to be evacuated. He reasons that they cannot rely on lofty promises of hope if the results do not reflect reality. Shuusui criticizes his logic while the Slayers are performing their impulsive death charge, reflecting that his strategy is redundant and a flawed artifact of eight years ago. Moved by the youth's origins and protest, Kuyou backpedals and permits Kikka and Yamato to assist the tired trio. He justifies aloud that his act provides sufficient fighting potential for the village's defense.

Rinne's reinforcements bolsters Utakata's defenses, so Kuyou is ordered by Kyokai to arrange for the "Innovator"'s demise. He orders the Slayers to locate the "Eclipse Demon". When their search proves unsuccessful, Kuyou splits up the Slayers with individual assignments, giving them each a letter to read only after they have dispatched. The protagonist is exempt from the search; he/she is told to search for their missing Tenko at its last reported sighting. His elaborate setup leads the protagonist into Kyokai's trap and informs the Slayers of its danger and Kyokai's escape point, leading to his reveal of his true allegiance.

Betrayed by her trust in him, Kyokai threatens to kill her hostage. Kuyou basks in the ruse and hollers for Kyokai to be captured. His plan succeeds. Shuusui and Rinne later inform him they rescued his subordinate off-screen, even if their animosity for him hasn't changed. When his soul is being devoured by Izuchikanata, he believes he is reliving the "Awakening" and taking the notoriety for his decision. He relinquishes his authority over the group after he is saved, handing the reigns to the protagonist.

After Izuchikanata is slain, Kuyou decides to stay in Utakata for his amusement. He receives a letter from Mio and Miyu's father and gives it to the protagonist. He permits the girls to do as they please with the news.

The Machiavellian Kuyou is unloved and unpopular. There are few who appreciate his decisions and fewer still who would dare object to him. His intelligence alone gains him acceptance. Many are unaware of his eternal regret for abandoning the north. He feels he must impose his ruthlessness to respect their sacrifices, feeling that any other attitude would be inexcusable to the dead. Kuyou prides his strategies and rarely has the gull to admit his faults. He hides his sentimentality with a bellowing laugh or cleverly rewords his change of heart to sound in his favor.

Kuyou has known Yamato for thirty-five years, nearly the entirety of their profession. He belittles his cohort's laziness and jocularity with his subordinates, inwardly envying Yamato's positive reputation. The two elders understand one another, and are blunt to one another through forced grins. Any survivors of the north, particularly Shuusui and Rinne, earns the strategist's discreet lenience.

Higher affinity increases the chances of him appearing within the village's bathing area and grants the protagonist permission to invite him to it. Completing the requests with a high affinity with Kuyou rewards an exclusive item needed to forge a rare spiked club. 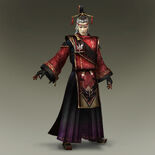 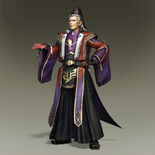 Toukiden 2 render
Add a photo to this gallery
Retrieved from "https://koei.fandom.com/wiki/Kuyou?oldid=297670"
Community content is available under CC-BY-SA unless otherwise noted.