Kyūbi (九尾の狐, Kyūbi no Kitsune: literally "Nine-tailed Fox") is a mythological beast whose myths originated from China and spread to other parts of East Asia. Ancient Chinese texts state that it is a malevolent specter of mischief and trickery with a maddening craving for human flesh. Yet later generations of folklore may instead state that it is a divine guardian for various deities. This fox spirit remains morally ambiguous in East Asian folklore, generally accepted as a magical being that can change its allegiances at any time. Two examples of these foxes are Daji and Tamamo.

Her Warriors Orochi counterpart is designed by Akihiro Yamada. She is unlocked by completing the final battle and by clearing one of the side scenarios involving Tamamo, Seimei, and Sun Wukong.

A malevolent being who thrives from conflict, Kyūbi originally waged war against the Mystics at their realm. According to Yinglong, she was defeated at some point, and her powers to create doubles were suppressed by the Heavenly Emperor, and she was released. Bent on revenge, she disguised herself as Tamamo to discreetly spread discord wherever she went as well as to blend in with the other mystics. Scouting Yinglong himself at Yamatai, she later manipulates him into killing the Heavenly Emperor and damaging the Divine Mirror. With the death of the emperor and the damage to the mirror, much of Kyubi's powers returned, and but she was eventually sealed in the Killing Stone.

After her tails are all defeated at the hands of the coalition, Kyūbi emerges in her true form at Wan Castle after a failed attempt to seal her. Vowing revenge, she flees to Dongkou, where she is defeated by the Coalition. Despite her defeat, she uses her remaining energy to take control of Odawara Castle. In the end, the Coalition led by the Wei-Toyotomi army catches and defeats her before she can flee again, and she is sealed at last by Guo Jia. She is defeated by her pursuers and sealed within the Divine Mirror.

While inside the mirror world, the vixen attempts to ease her boredom by personally crushing the reflections of her enemies. She first interrupts a training battle between the Shu-Tokugawa army and Kanbei Kuroda's army, crushing both and gaining the services of Zhang Jiao, Goemon, and Kanbei. Moving on to Mt. Xingshi, she turns Yuan Shao and Cao Cao against each other, and recruits the former along with the wandering Okuni. Venting her rage against the replica Mystics allows Kyūbi to gain satisfaction during her confinement.

In Warriors Orochi 4, she only appears as a bonus character, who is unlocked through one of the camp's upgrades.

Kyubi is the final boss of the game's "Bloodshed's End" DLC expansion, possessing the body of Yodo-gimi.

Contrary to her guise as Tamamo, Kyūbi is openly hostile to those she considers enemies and is easily prone to anger. Her rage against the mystics who sealed her is matched only by her desire to sow discord between humans and feed on their animosity. She shares an affinity with Da Ji, Orochi X, Seimei, and Hundun.

During the latest installment, she is put off by the sincere compliments of Guan Suo to her despite her assertions of being more dangerous and monstrous. His obliviousness to the degree of such words also makes her slightly afraid of him.

The majority of her four basic weapons continue the flower naming motif from her other counterpart. The first two names reference the mythological beast in some manner. Her first weapon is named after peach blossoms as a reference to China, while her second "exposing pine" is a roundabout method of saying that Kyūbi no Kitsune is often considered one of the Three Evil Spirits in Japan.

The other two weapons have flowers which symbolize contradiction. Her third weapon names two flowers simultaneously: the Japanese wisteria and Japanese camellia. Wisterias can represent euphoria, but camellias can be interpreted to mean an unclean death. The buttercup is the namesake for her fourth weapon and it has two meanings within the Japanese flower language. It can represent glory, honor, a child's innocence, or long-awaited arrivals based on interpretations from modern culture. Alternatively, the buttercup can viewed as a flower which disparages others from trying to succeed. A famous tale tying into this negative version is Minamoto no Yoshinaka's demise. He was reportedly killed by his cousin's troops within a field of these flowers.

"Why would I ever want to do that?! You can go ahead and destroy yourself without me."

"Oh...? A puny, inconsequential human would dare to taunt me? See these nine tails? They are proof of my might. I have brought down disaster and ruin on humanity, and even wreaked havoc in the Mystic Realm."
"Oh, I know. But that's why it's so surprising to see you looking the way you do. After all, you're just so beautiful."
"I... Hmph, that's just when I decide to make myself appear human. I don't want anyone to be able to see through my disguise..."
"No, I mean you look beautiful now. Your long, clear eyes, your silvery ears, your nine, soft tails... You are stunning."
"Augh... Y-You really mean what you're saying... In all my years of existence, never have I been so flustered by a mortal... You are a terrifying man indeed..."

): Lights up a row of blue flames on the tips of her tails that go after a single enemy.

): Transforms her tails into spears thrusting out of the ground to send enemies airborn, then slashes them with her tails transformed into swords.

): Grabs a single enemy with her tails, slams them on the ground twice and finishes by throwing them away.

): Strikes twice with her lower row of tails, then floats forwards while having her tails whirling around her, juggling enemies that get caught.

: Lights up a row of blue flames on the tips of her tails and sends them forward, lifting enemies caught by the flames upwards.

: Strikes downward with the top row of her tails, twice with the bottom row, then strikes forward rapidly several times with four tails and finishes by striking outward with elongated tails.

: Strikes downward with three tails on the right.

R1: Transforms three of her tails in replicas of the characters accompanying her for a short time.

: Throws the Purging Pestle in front of her and uses her tails to create a a large globe of energy that obliterates enemies (Warriors Orochi 4 only)

: Transforms her tails into a large scythe and slashes through the rows of enemies.

(True): Performs the same motion and finishes with a swirl of blue flames around her.

: Strikes upward with three of her tails.

: Slams three of her tails into the ground.

: Elongates her tails and strikes in a circle-motion around herself. 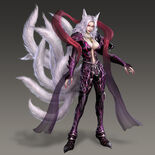 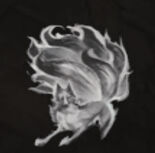 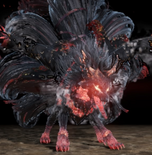 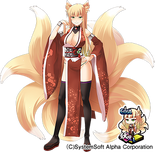