Kyokai (虚海) is a secondary antagonist and later resident of Utakata Village during the single player main narrative. Her only function is to elaborate on the plot.

Her real name is Chitose (千歳). She gives another alias, Sen (千), to the protagonist.

Chitose is a resident of Nakatsu Kuni born one thousand years prior to the main setting. She was naturally gifted with the ability to talk to animals whom defended her during fights. Horō befriended her for her powers and, through Horō, Chitose became friends with Obito. Chitose personally devised the name for the "Slayers" organization when the trio decided to create it and idealistically believed the name helped others and made them champions of justice.

During the climatic battle against Izuchikanata, Chitose's soul was dragged into the dimensional abyss and was exposed to the demon's gate. She emerged from the ordeal in one piece alone, sucked by the portal into an era foreign to her. To her horror, she became half-human, half-demon during her trip and no one wanted to accept her. In her years of solitude, Chitose chose to survive within gaps of the dimensional realms, hoping her friends would somehow save her. Her hybrid state froze her youth and she is vague in her descriptions, but the script implies she suffered for decades or centuries.

Her optimism dwindles as time passes, causing her to forget her original motive for persevering. Then she discovers records of the "Jade Eyed Wanderer", immediately concluding that she must be Horō. Chitose then plots to destroy the world, postulating that its destruction can reset the fusion of time eras within Nakatsu Kuni. Her ultimate goal is to utilize its chaos to call Horō back to her. Chitose mistakingly believes her friend has the ability to time travel at will, insisting for her native time era to be restored.

Chitose joins the Way of the Moon and Sun, a secret organization of taboo demon researchers who seek to discover their origins, as Kyokai with the objective of gaining the knowledge to meet her goals. Her arcane intellect propelled her to become one of its elders. As one of its members, she became acquainted with a man who was half-demon and had many of the same symptoms she experienced. One day that same man suddenly perished, his body being reduced into drifting sand. Traumatized by the sight, Chitose hastened her plans before she would suffer the same fate.

Sometime before the main narrative Chitose has discovered the "Eclipse Demon", precursor fragments to Izuchikanata's arrival. She utilizes these pieces to conjure an army of demons to threaten the north. Chitose becomes aware of Kuyou's influence and kidnaps his daughter. The hostage renders him her indentured slave and commands Kuyou to assemble a Hundred Demon Corps unit to Utakata Village, the place where the "Innovator" resides. She considers the person an obstacle to her success and seeks to kill him/her.

After her "Eclipse Demon" portal fails to destroy Utakata, Chitose orders for Kuyou to isolate the "Innovator". She holds the protagonist's Tenko captive during the wait. To her dismay, she learns the protagonist and the "Innovator" are the same person only when he/she falls for her Imihayahi trap. Chitose attempts to flee until she is thwarted by Kuyou's plot. Horō prevents Chitose from using an "Eclipse Demon" fragment on herself. In her distress, Chitose utters her fond nickname for Horō, triggering the restoration of the latter's memories and the first reveal of Kyokai's real name.

Chitose is thrown into Utakata's gaols and is watched by Rinne and the Shiranui guard. The Slayers routinely release her from her cell for questioning, mainly wishing to know her motives and her ties to Izuchikanata. Feeling utterly defeated, she is compliant if emotional while explaining her past to them. When her soul is being consumed by Izuchikanata, Chitose relives her past and her years of solitude. Unlike the others, she is indignant at first when she is saved. Chitose gives into the protagonist's kindness and decides to help their cause. Kikka can siphon her priestess powers with Chitose's demon half to locate the mass collection of souls within Izuchikanata. Her plan works and the demon is defeated.

Izuchikanata's death restores Chitose to her original human self. Its purification defied her impressions that she would join the demon in death. Horō warmly convinces her to once again live by her side. Yamato permits her allegiance to the "Slayer" organization and the duo now prosper in Utakata Village. Chitose brings joy to the children of the village by entertaining them with her lively animal chats. She helps the Slayers by continuing her arcane research.

Chitose was once a preppy and curious girl who loved to help others. She believed in her friends and was the driving heart of the trio. She liked to play games and was mildly cynical of her surroundings. Chitose particularly adored Horō and called her "Sister Horō" (ホロウお姉ちゃん, Horou-oneechan). She is the one who taught Horō the Tenko language.

Much of her joy was robbed from her in her solitude. The people's fear and her homesickness led way to her jadedness and bitterness for the present. Although she blames the demons for her misery, Chitose inwardly blames herself for her survival. She feels she can only find peace in death throughout the majority of the main narrative.

Her reunion with Horō and her time of reflection helps her cope with her losses. With Horō's help, she gradually enjoys life again. She and Horō mentor Hayatori for the Tenko language; Chitose remarks that he is horribly inept.

The protagonist can complete her chain of personal requests post main story to greatly boost their affinity ratings with her. Her requests are clearly labeled with her name in each posting. They must be completed in consecutive order.

Higher affinity increases the chances of her appearing within the village's bathing area and grants the protagonist permission to invite her to it. Completing the requests with high affinity rewards an exclusive item needed to forge a rare rifle. 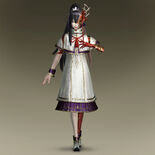 Chitose portrait
Add a photo to this gallery
Retrieved from "https://koei.fandom.com/wiki/Kyokai?oldid=257643"
Community content is available under CC-BY-SA unless otherwise noted.