Lady Muramatsu is Masayuki Sanada's eldest child, and Nobuyuki and Yukimura's elder biological sister. As the eldest, she was highly respected by her younger brothers, and they exchanged letters with her as late as the Osaka Campaign.

Lady Muramatsu appears as a non-combatant resident of the Sanada castle town in Spirit of Sanada. She offers her family advice at times when they most need it. Her biggest contribution to the overall story is going to Azuchi Castle as a hostage when the Sanada surrender to the Oda but escapes to return home during the chaos at Honnoji. She survives until the epilogue with Nobuyuki, mourning Yukimura's passing.

Though Nobuyuki grieves his decision to split his family even if it did ensure their survival, Lady Muramatsu admonishes him that though they fought on different sides, they were never were truly apart in spirit.

Gentle and patient, Lady Muramatsu cares for the well-being of her younger brothers, always awaiting their return and watching over them. Both Nobuyuki and Yukimura, however, are unable to discern her true thoughts, outside of her familial love towards them.

Free-spirited and unpredictable, she is noted to act against the norms of her time, choosing to wander off on her own, much to her father's chagrin. Out of all her siblings, her uncles acknowledge that she holds the most wisdom from her father, and is able to understand the hidden reasons behind certain military and political decisions. Her genuine care for her family is coupled with her knowledge and she often acts as a guide for her younger brother, and even her father.

One of the gifts that will please Lady Muramatsu in Spirit of Sanada are grapes. Modern Ueda City harvests and sells grapes as a specialty crop. They use it to make the gourmet wines and jams that are sold around Ueda Castle and other Sanada themed tourist areas. Grapes can represent kindness, compassion and charity within the flower language.

The gift that she will give to players is a shining silver ore, another reference to her native clan. One of the Sanada clan's disputed specialties was something that they learned while serving the Takeda: mining. It is believed that their mining techniques or mining agreements helped to seal alliances with other clans, especially with the Tokugawa clan.

According to Kazawaki, a memoriam authored by Sanada retainer Kazawa Heijizaemon during the early Edo period, Masayuki surrendered to the Oda and then sent Lady Muramatsu as a political hostage to the Oda. She stayed at Azuchi until the Incident of Honnōji occurred. Masayuki sent messengers to search for his daughter, but her whereabouts were unknown. Two years later, after the Sanada established their independence, a Sanada messenger came into contact with twenty handmaidens who claimed to hail from Shinano at Kuwana. They sent a letter to Ueda Castle which was received by Masayuki; he verified the letter's claims of their origin and sent servants to bring Lady Muramatsu back to Ueda Castle. When Lady Muramatsu first entered Ueda Castle, Nobuyuki sent a warm letter addressed specifically to her filled with his relief; this letter is often used to suggest that she had been missed for a prolonged period of time. As a show of gratitude, Masayuki sent the lord of Kuwana a modest reward.

This story has been heralded as the truth for generations, but modern Takeda and Sanada historian Kazuhiro Marushima has his doubts about its authenticity. He argues that it's a fundamental procedure for political hostages to be kept distant but still within local communication range of their families. The idea that the Sanada somehow lost contact with Lady Muramatsu for years is suspicious to him. In the NHK Taiga drama Sanadamaru, which Marushima served as one of the historical consultants, its narrative sidesteps the issue by having Lady Yamanote being the hostage instead.

Shortly before 1582, Lady Muramatsu was married to Takeda retainer Oyamada Shigemasa when the latter was in his late teenager years. Due to the Takeda Annihilation in 1582, Shigemasa lost his clan heritage shortly after and started to serve the Sanada. Marushima adds that Lady Muramatsu had given birth to Shigemasa's son Yukitomo by this time, but the details of Yukitomo's early life remain too hazy to verify if Shigemasa was truly his father. After the Odawara Campaign, Shigemasa started serving Masayuki and, by December 1, 1590, he became part of the Sanada clan through his marriage with Lady Muramatsu. Masayuki then gave Shigemasa the Chiisagata based Muramatsu Manor, which became the namesake and starting date for his wife's title as Lady Muramatsu.

For the Osaka Campaign, Yukitomo fought under Nobuyuki's banner and, despite being on opposing sides, Nobushige worried for him. After the conclusion of the winter campaign, Nobushige wrote a hurried letter to Lady Muramatsu to assure her that he and his eldest son Daisuke were still well. He regretted that he couldn't be certain of Yukitomo's condition during his haste but promised to write as soon as he had the time. Lady Muramatsu passed this news onto Nobuyuki through letters, keeping the three siblings connected throughout the conflict.

Nobuyuki's letters were delayed due to him overseeing the transfer of his forces and his following illness, but he expressed an ardent wish to be reunited with his elder sister. Nobushige's responses suggests that they were delivered quicker despite the distance between him and Lady Muramatsu; Shigemasa sent two fishes to Nobushige alongside one of Lady Muramatsu's letters; Nobushige thanked them shortly after. Many of his letters were spent reassuring his sister to not worry about him. In Nobushige's final letter to her, he expressed his sincerest gratitude to his sister. No matter what happened in the war, he would always consider his sister, Shigemasa, and Yukitomo as his family. This letter was dated January 24, 1615 and reached her by February 8; it is often romanticized as the only surviving record of Nobushige's last will. Lady Muramatsu's letters with her younger siblings—especially her last one with Nobushige—are family heirlooms within the Oyamada clan.

She died when she was 65. Her grave lies with the graves of other Sanada family members at Matsushiro's Chōkoku-ji Temple. 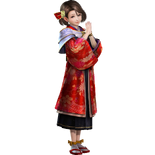 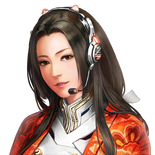 Muramatsu-nyan in Samurai Cats
Add a photo to this gallery
Retrieved from "https://koei.fandom.com/wiki/Lady_Muramatsu?oldid=444937"
Community content is available under CC-BY-SA unless otherwise noted.