Lazarel (ラゼル, Razel) is the default name for one of the selectable main protagonists in Dragon Quest Heroes II. The player can choose to rename him if they select him as their hero. If the player chooses to view the story from Teresia's perspective, he will be called his official name within the game.

Lazarel spent his early training days studying in the neighboring kingdom Orenka. He has a rigorous training regime.

Moriyama has played Dragon Quest games for as long as he can remember. His favorite game in the series is Dragon Quest III. He said he felt honored to be a part of something he has admired and felt goosebumps working beside the series' producer.

He is proud and true to his country, sometimes coming across as foolhardy. Clashing with his friends from rival kingdoms causes him hardship.

Lazarel's weapons and available skills depends on his currently equipped weapon. His classes have slight variations from his cousin. 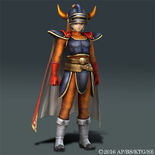 Dragon Quest I protagonist costume
Add a photo to this gallery

Retrieved from "https://koei.fandom.com/wiki/Lazarel?oldid=314718"
Community content is available under CC-BY-SA unless otherwise noted.